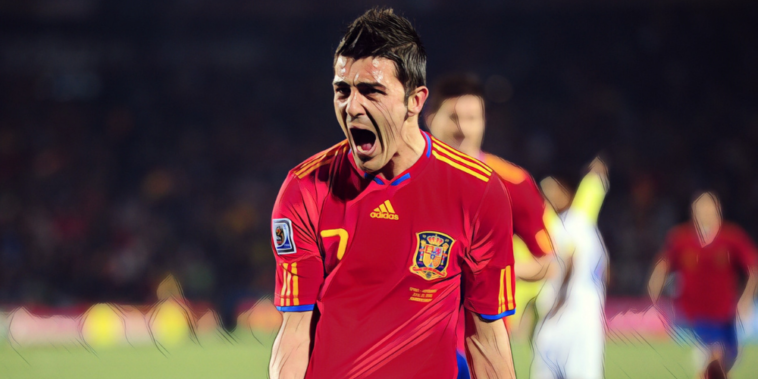 Spain’s reign at the summit of international football was both revolution and redemption. For decades one of Europe’s finest footballing nations had flattered to deceive, failing to turn talented components into a team capable of challenging for major trophies.

La Roja’s drought-breaking success at Euro 2008 was followed with wins in each of the following two major tournaments, a three-peat of triumphs that had been unprecedented in the international game.

Memories cast back to the nation’s glorious period as football’s finest side will instantly recall a monopolisation of possession, as the pass masters of Xavi and Andres Iniesta dominated the ball in a give-and-go style that broke lines and unlocked stubborn defences.

The technical talents of tiki-taka’s finest were the chief conductors of an all-star Spanish symphony, but without the cutting edge of La Roja’s greatest goalscorer there would perhaps have been no Spanish stranglehold on major tournaments.

David Villa’s greatest moments came in the colours of his country. His club career was exceptional in its own right, but his exploits on the international stage helped Spain rewrite history.

Villa’s rise to the top of world football began far from the La Liga superpowers of Real Madrid and Barcelona, making his first impression on professional football in the more humble surroundings of Sporting Gijón.

Having overcome a fractured femur as a child – alongside later doubts and disillusion with the sport – to progress through the ranks at the Rojiblancos, a flurry of goals for the club’s B team saw Villa promoted to the senior side.

He wasted little time in making an impression in the Segunda División, scoring 18 league goals during his debut campaign before reaching 20 the following season.

Villa’s natural instinct around goal and innate ability to create and convert chances saw him pique the interest of rival sides, with Real Zaragoza – recently promoted to La Liga – capitalising on Sporting’s financial issues to sign the promising poacher in a €3m deal.

Villa’s goal record failed to slow despite the step up to Spain’s top division, enjoying a brilliant first season with his new side to score 17 league goals. Four further goals came in the Copa del Rey, as Zaragoza upset the odds to win the Spanish Cup.

Real Madrid’s Galacticos were beaten 3-2 in an entertaining final, with Villa scoring from the spot to claim the first major silverware of his career.

Zaragoza failed to build on that achievement despite Villa hitting 18 goals the following season, performances which earned him a first inclusion in the Spanish national side.

Domestically, however, he was soon on the move again as Zaragoza cashed in on the free-scoring forward. Valencia represented the next rung on the ladder to the elite.

The Mestalla proved the perfect environment to take his game to the next level, as he enjoyed a sensational season with Los Che to score 25 league goals. Outscored by only Samuel Eto’o in La Liga, it was the clearest indication yet that Villa belonged among the division’s great goalscorers.

His first season earned Villa inclusion in Spain’s 2006 World Cup squad and he marked his first appearance in the competition with two goals in a 4-0 win over Ukraine. Luis Aragonés’ side cruised through the group stages, but bowed out to France in the last 16 despite Villa scoring from the spot.

Villa continued to fire in 2006/07 and netted another 20 goals in all competitions, whilst he led La Liga for assists after striking up an impressive understanding with Fernando Morientes. His time with Valencia proved the most prolific of his career, finishing as the club’s leading scorer in five consecutive campaigns and netting a stunning 129 goals in 225 appearances.

Despite the goalscoring gifts of their number seven and emerging talent in David Silva and Juan Mata, the club struggled to compete with La Liga’s best and a single Copa del Rey was a modest return for Villa’s contribution.

Success, however, was not far away.

Spain travelled to Euro 2008 with cautious optimism, safe in the knowledge their squad had huge talent but one who carried scars from past tournaments.

Villa has succeeded Raul as the nation’s leading forward, helping himself to a hat-trick in the opening fixture as a superb Spanish performance dismantled Russia in a 4-1 win in Innsbruck. Villa scored again, a crucial stoppage-time winner, as Sweden were beaten four days later.

The passing and finishing for these goals 🤤🤪

A win over Greece ensured progress in flawless fashion, before a shoot-out win over Italy in the quarter-finals saw Spain dare to dream.

Villa’s tournament ended in the semi-final rematch win over Russia, the forward forced off with an injury that saw him miss the final win over Germany as Fernando Torres’ goal ended Spain’s wait for success. His contribution had been pivotal, however, ending the tournament as the leading scorer.

Spain arrived at the World Cup in 2010 in strong shape. The weight of decades of disappointment removed and holding a status as European champions, La Roja – now under the management of Vicente del Bosque – were among the favourites.

Defeat in Durban to Switzerland threatened to derail their challenge, but Spain regrouped from that opening shock with Villa again at the centre of their success.

He scored twice as Honduras were beaten to get La Roja’s campaign up and running, his first a wonderful individual effort as he drifted in off the left and beat three defenders before firing home.

It was a moment of inspiration from Spain’s seven, the ball glued to his feet as he danced between two challenges before shifting the ball outwards and into the top corner.

Villa then opened the scoring as Spain beat Chile to progress as group winners, scoring an outrageous goal – with his weaker left foot – from all of 40 yards after Claudio Bravo’s clearance fell at his feet.

Villa’s finest moments often came in the inside left channel, his comfortability on either foot allowing his to cut inside or take defenders on down the flank. His winner against Portugal in the last 16 came from a familiar position, converting at the second attempt to eliminate their Iberian rivals.

The quarter-final was again decided by Villa, who scored the only goal of the game against Paraguay. Spain had rode their luck and had seen Xabi Alonso miss a retaken penalty, before Villa reacted to Pedro’s effort off the post to turn home the winner.

Spain eventually secured their first World Cup win in Johannesburg with Villa having been irreplaceable to their greatest moment, the difference at crucial moments during a tournament in which Del Bosque’s side monopolised possession without creating huge chances.

Villa scored or assisted 75% of Spain’s goals in South Africa, a record for a World Cup-winning team, topping Diego Maradona’s 71% contribution for Argentina at Mexico 1986.

Ahead of the World Cup, Villa had agreed a deal to sign for Barcelona. It was a move that provided him with a chance to compete for club football’s biggest prizes and his debut season delivered.

Zlatan Ibrahimovic had proven an awkward fit for Barcelona the previous season, but his replacement slotted seamlessly into Pep Guardiola’s plans with Villa’s combinations alongside Lionel Messi and Pedro firing the Catalans to success.

Barcelona were crowned champions of Spain after finishing four points clear of Real Madrid in the title race, whilst the Champions League also arrived after a breathtaking final performance to beat Manchester United at Wembley.

Villa scored in the 3-1 win with a wondrous bending effort beyond Edwin van der Sar, one of 23 he scored in 2010/11 and a goal fitting of the occasion as the Spaniard’s spellbinding side conquered Europe.

His second season saw a broken leg curtail his campaign and despite adding another league winners’ medal in 2012/13, he was allowed to leave for Atletico Madrid after scoring 48 goals in 119 appearances across three seasons at the Camp Nou.

Neymar’s arrival had pushed Villa towards the exit door, but he responded by firing his new side to a shock Spanish league title. He scored 13 league goals as Diego Simeone’s side upset the odds, clinching the title with a goalless draw at Barcelona in the final fixture of the season.

That triumph proved a fine ending for Villa in European football, as he headed to MLS and New York City – via a brief spell in Melbourne – to plunder 80 goals in 126 goals across the Atlantic.

Japan proved his final port of call as a captivating career wound down, in which he featured alongside Iniesta, Thomas Vermaelen and Lukas Podolski for a single season at Vissel Kobe in the J-League.

The abiding memories of Villa are those glorious years with Spain, with few having had a greater role in the most sustained period of dominance international football has seen.

He remains Spain’s all-time record goalscorer after scoring 59 goals in 98 appearances for La Roja, whilst the nine World Cup goals of El Guaje are another national record. His 12 goals scored in one calendar year (2008) has not been bettered in the colours of his nations and equalled just once, by Villa himself in 2009.

Spain have produced elite midfielders at an unthinkable rate across the past two decades, a conveyor belt of talent the envy of world football.

Unearthing goalscoring gems has proven more difficult, with Villa remaining the brilliant benchmark the next generation will aspire towards.