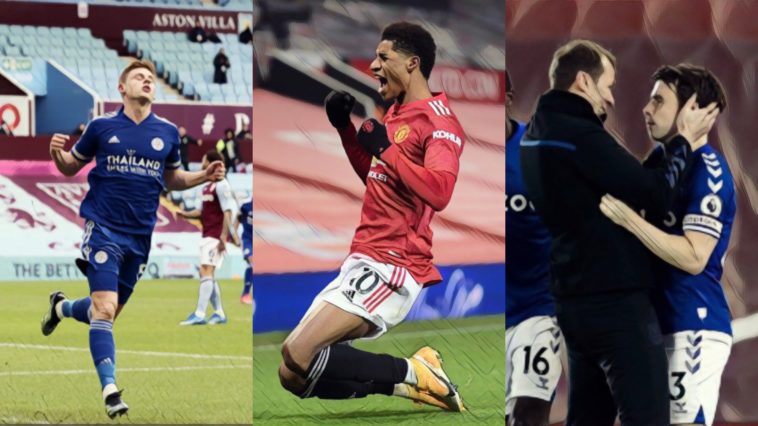 The ancient scriptures told us that a battalion of men in blue had beaten the red army behind enemy lines in the before time, an age so distant that it felt like they would never repeat such a victory.

Indeed, Everton did beat Liverpool at Anfield on Saturday, their first win at the ground since 1999. That’s just over two decades of pain and misery at the home of their greatest foes – their former home – with seemingly no end in sight.

If ever there was a time to end that run of 20 league games without a win, it was now, when Liverpool are experiencing one of their worst ever spells. The champions are yet to win at home in the Premier League in 2021 and have scored just one goal in the competition since the turn of the year.

Everton were hardly in stellar form either, but they struck early through Richarlison before doubling their lead in the second-half with a Gylfi Sigurdsson penalty. From then on it was never in doubt and the scenes at the end were simply marvellous.

Special mention to Duncan Ferguson, who Carlo Ancelotti said was “the happiest man” in the ground, for his undilated glee at the final whistle. I’m convinced the Scot is trying to break the Italian out of his ultra cool shell every time something incredible happens, but the boss won’t budge. They’d make for a great sitcom duo.

After 25 games Leicester City are neck-and-neck with Manchester United in the Premier League table on 49 points, have won the second-most matches (15) after Manchester City, and have lost just once in their last ten league games.

Their latest victory, a 2-1 win over Aston Villa, further burnished their top four credentials. One of their key men in that match and across the season has been Harvey Barnes, who has stepped up with the goals whenever Jamie Vardy was injured or out of form.

The winger was involved in both goals on Sunday, assisting the first before scoring the second, and created more chances (4) than anyone else on the pitch. With nine goal involvements in his last 11 league games, Barnes is truly coming of age this season.

"This fearless team are doing the business again away from home!" 🦊

With Gareth Southgate watching in the stands, Harvey Barnes gets his 13th goal of the season 💥

A special mention to Raphinha who was outstanding for Leeds United in their 1-0 defeat to Wolves on Friday. The Brazilian created six chances, the most of any player in the Premier League at the weekend, three of which were big chances. Unfortunately for the Whites all three fell to Liam Cooper, not exactly the man you need to finish off opportunities.

The last game of the week provided its best goal, as Marcus Rashford used his individual brilliance to open the scoring for Manchester United against Newcastle on Sunday night.

The English forward received the ball on the right flank, mercilessly teased Emil Krafth before cutting into the box and firing the ball past Karl Darlow at the near post. Beautiful.

A lovely nutmeg to start an excellent individual goal! pic.twitter.com/w6sJ3R4HIw

Why Scott McTominay is becoming increasingly important to Man United

Ademola Lookman’s winning goal for Fulham against Sheffield United was brilliant, but the pass leading to it from Joachim Andersen was sublime. Just a shame it didn’t go down as an assist.

It’s been a rocky season for Jordan Pickford, from a catalogue of errors to taking Virgil van Dijk’s leg clean off. But Saturday night at Anfield was the Pickford redemption show, as the England goalie made six stops to deny Liverpool.

The finest save of the bunch came via a shot from a fellow Mackem, Jordan Henderson, who volleyed from the edge of the area but the shot was tipped around the post. Watch it below at the 0.30 mark:

Not quite sure what Jamie Carragher was going for here…

*Richarlison wheels away in celebration with tongue out*

Carragher: “Tongue’s out. They’ll be a few more tongues out tonight I can assure you”

In case you needed definitive proof that Ilkay Gundogan is an absolute monster.

Ilkay Gundogan is the top scorer in 2021 at Anfield, the Etihad Stadium and the Hawthorns.

West Brom need every last point they can get, so they’ll accept the one they got at Turf Moor on Saturday, but the ten-man Baggies really should have taken all three.

Mbaye Diagne passed to Matheus Pereira in the box with the goal at the Brazilian’s mercy. All he had to do was tap it in – and he somehow missed it?! West Brom deserve relegation for this alone.

It’s harsh to give this award to Illan Meslier for his own goal against Wolves on Friday, because he didn’t know anything about it. But it wins for comedic effect alone.

Nothing the goalkeeper could do about that one! pic.twitter.com/pff5O3ZjQr

Dishonourable Mention: Southampton’s Danny Ings foul to give away a penalty to Chelsea.

Last Wednesday may have been the worst day in Robbie Brady‘s professional career. The Irishman came off the bench for the injured Johann Gudmundsson against Fulham, but went on to get booked for a silly challenge, flailed in his attempt to stop Fulham’s goal, and in the ultimate indignity he was subbed off just 25 minutes after coming on.