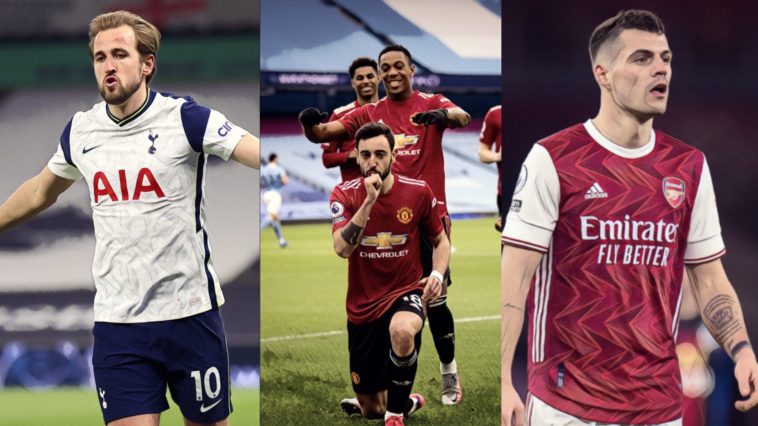 Going into the weekend’s Manchester Derby, the form guide suggested there would only be one winner. Manchester United said “sod that” to that notion, putting in a stellar performance to soundly defeat their local rivals.

Manchester City were caught cold in the opening minutes, as a clumsy Gabriel Jesus challenge on Anthony Martial gave Bruno Fernandes the chance to open the scoring from the spot in the second minute.

Luke Shaw doubled United’s lead in the second-half to end City’s 21-game winning run, while extending their unbeaten away run to 22 Premier League matches. It also saw an end to City’s 28-game unbeaten run in all competitions.

Honourable Mention: Fulham’s first win over Liverpool at Anfield since 2012.

Harry Kane has produced a few really top performances this season, but this one is right up there. The England striker was involved in all of Tottenham Hotspur’s goals in their 4-1 win over Crystal Palace, scoring two and assisting two.

Highlights from the Tottenham Hotspur Stadium as Harry Kane and Gareth Bale each scored twice against Crystal Palace. ⚪

That man again, Harry Kane‘s first strike was simply stunning. Not many strikers can score a goal quite like this.

🗣 "An absolute beauty from Harry Kane!"

Harry Kane adds to his two assists for Gareth Bale by scoring a sublime first time effort from the edge of the box! 🔥

I just had to include Southampton’s Che Adams here though, as his bullet of a hit rattled the net on Saturday in their 2-0 win over Sheffield United.

He must have a foot like a traction engine! 😮

It's an absolutely 𝙨𝙩𝙪𝙣𝙣𝙞𝙣𝙜 strike from Che Adams to double Southampton's lead! 🚀

Who needs James Maddison when Leicester City have Youri Tielemans delivering delicious assists like this?

Romain Saiss might just have secured himself the miss of the season award on Saturday. There were a host of big misses when Aston Villa and Wolves played out a goalless draw, but this was by far the worst of them.

It's a simply unbelievable miss from Romain Saiss who misses an open goal from point-blank range! 😲

PL goals per game by month this season

Chris Wilder isn’t going to let this season get him down.

"He rolled out with a big headband and thought he was Terry Butcher…more like Pat Butcher!"

Chris Wilder believes Oli McBurnie could 'do a job' in defence for #SUFC amid their injury troubles at the back! 👀

Arsenal were the better team on Saturday, but gifted Burnley an equaliser that cost them two points. Granit Xhaka obviously deserves criticism for his bizarre attempt to get the ball away, but what is Bernd Leno doing giving him the ball there anyway? He put his teammate in a really awkward position.

Chris Wood will never score an easier goal in his life! pic.twitter.com/h4jYPBebWN

Fulham were denied a precious point in their battle for Premier League survival when Josh Maja’s excellent goal was ruled out due to a handball in the lead-up. As we have likely all seen by now, the ‘handball’ by Mario Lemina made absolutely no difference to the play as his arms were by his side and the ball would have hit him on the hip.

The very next day IFAB announced that they were changing the handball rule so that accidentally handling it in the lead-up to a goal would no longer see the goal ruled out.

While it is a welcome change, that is of no use to Fulham now. It’s also incredulous that they should come to such a decision midseason like this when it’s not as if there haven’t been examples of perfectly good goals being disallowed due to innocuous handballs.