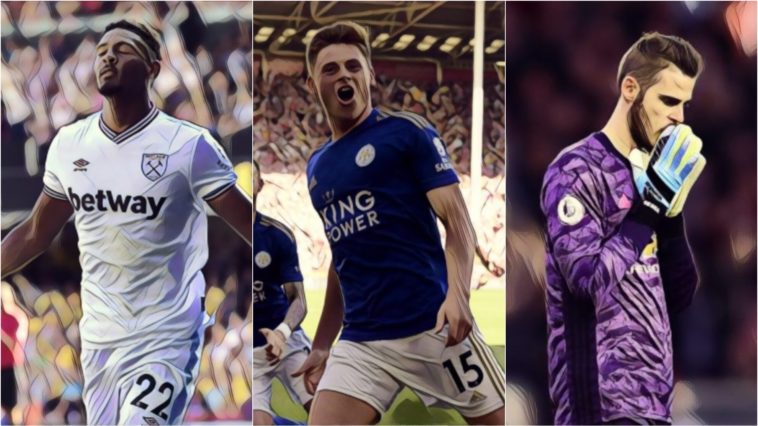 It has to be Crystal Palace getting a win at Old Trafford for the first time since 1989, thanks to goals from Jordan Ayew and Patrick van Aanholt, but more importantly it was the Eagles first win of the Premier League season.

That last victory at the famous ground thirty years ago was also a 2-1 win with the goals coming from Mark Wright. At the time Manchester United were still a few years away from a title win and under the stewardship of an under-pressure manager. Alex Ferguson’s job would be saved by an FA Cup triumph over the same opposition come the end of the season, before going on to dominate the footballing landscape.

Is history to repeat itself? We’ll get back to you on that one.

Judging by Saturday’s performance Sebastien Haller has the makings of a terrific centre forward. The Frenchman was a constant threat up top for West Ham United, but he dropped deep several times during the game, which pulled Watford’s defence out of shape to create space.

Haller scored twice, while he also had the most shots on target (3) and highest xG (1.87) of any player in the league over the weekend. His bicycle kick for the second goal was pretty good too. The former Eintracht Frankfurt striker has formally announced himself to English football.

There’s nothing like a thunderbastard, especially when it’s a game winner. Take a bow, Harvey Barnes.

Mo Salah’s wonderful run and finish for Liverpool against Arsenal was a close second.

How Liverpool outgunned Arsenal to win 3-1

If you’re like me, then you love a gratuitous outside-of-the-boot pass, so just enjoy this masterful James Maddison assist for Jamie Vardy as Leicester City beat Sheffield United 2-1.

The entire Everton team, bar maybe Seamus Coleman who was the only player making inroads into the Aston Villa box, had a shocking performance on Friday night, so it’s a bit unfair to call out one in particular who only played a portion of the game after coming on as a substitute.

But Theo Walcott cannot be allowed to get away with his horrendous miss in the Toffee’s 2-0 defeat. Chasing the game late on, the ball fell to the former Arsenal player inside the box and with plenty of time to make his next move. Yet he skied it over the bar instead of calmly placing it into the net for an equaliser.

Theo Walcott was so bad there. My God. How did he not even get that on goal? Can't even surprised, he's the kind of guy who writes an autobiography as a youngster and dyes his hair at 30.

The miss was so bad that Moise Kean, Everton’s recent 19-year-old recruit, punched the ground in frustration.

Jack Grealish has won one Premier League game in a row

2019 has not been a vintage year for David De Gea, who has made more unforced errors leading to goals since January than he did in the five years previous to that.

Man United should have got out of Old Trafford with at least a point, if not more, after creating far more chances than Crystal Palace, but the Spanish goalkeeper allowed Patrick van Aanholt’s shot to squeeze underneath him for a late winning goal.

The Dutchman can certainly strike a ball hard, but it was an eminently stoppable shot for De Gea

“Young players will always get into my my side on merit, whether they deserve it or not.”

“How is that not a penalty?” was a common refrain this past weekend, as there were a series of no-calls by referees in several different matches. Chelsea and Manchester City were denied clear spot kicks, while Man United could (and probably should) have had three rather than just one against Crystal Palace.

But for this week we’ll focus on Jamaal Lascelles challenge on Harry Kane in the Newcastle box, which both match official Mike Dean and the VAR Anthony Taylor deemed not to be a foul.

Should #THFC have had a penalty?

Lo Celso puts Kane through and Lascelles appears to tumble, cutting across the path of the forward!

Now we can argue all day whether or not Kane goes down too easily or tries to initiate contact with his leg, but the ‘tackle’ by Lascelles is a bizarre one. He dives to the ground in an effort to stop the striker, putting his arm across at the same to get in his way, but the important fact is that the Derby native makes no effort to win the ball.

Surely this is the kind of scenario the VAR was invented for? To correct what one might deem a “clear and obvious” error by the referee. Well, apparently not, folks.

The Professional Game Match Officials Limited (PGMOL) gave this explanation for the decision:

From #PGMOL on Kane #VAR call at #TOTNEW: "It was considered not to be a penalty by the on-field referee. As this was a subjective decision, the VAR deemed that there was not enough evidence to overturn the original call and so stuck with the on-field decision."

The notion of “not enough evidence to overturn” seems to be taking a leaf out of the NFL’s playbook when it comes to video review, although that still doesn’t stop officials in that sport overturning decisions with a so-called lack of evidence.

Five contentious penalty calls this weekend, none given by VAR. What’s the point in using it if we’re only going to implement it for hairline offside calls and inconsequential handballs?

This award goes out to all the racist idiots who abused footballers online during the week in a truly depressing display of bigotry and intolerance.

The abuse was firstly aimed at Paul Pogba after missing a penalty against Wolves, before Marcus Rashford became the target for doing the same against Palace. This comes just weeks after the same thing happened to Tammy Abraham following his miss in the Uefa Super Cup shootout. For some reason this gives certain undesirables the misguided idea that they are deserving targets of such invectives.

I would say we are returning to the dark ages of English football, but the sport has never been truly rid of the scourge of racism. In America we have seen Major League Soccer’s tepid response to far-right hooliganism as well as their censoring of anti-fascist imagery, which only emboldens the racists and fascists to use games as a breeding ground for their ideology.

The Premier League has to realise that there is no middle ground on this issue, it is a problem that has to be fought vociferously. Otherwise, it is the BAME players and fans who suffer the most because of it.