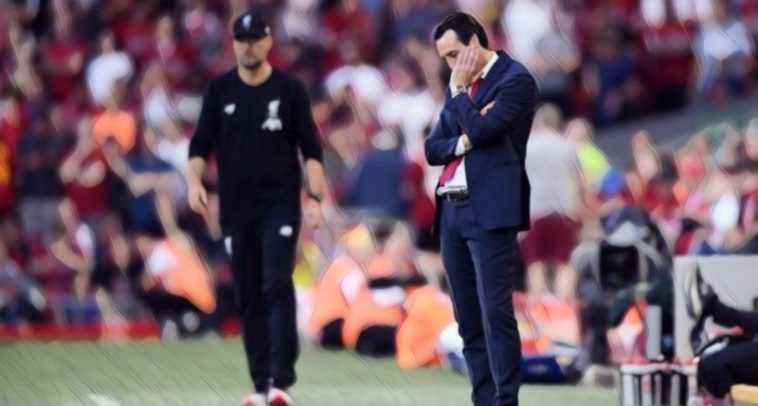 A brace from Mohamed Salah sealed a comfortable victory for Liverpool against Arsenal, as the Reds triumphed 3-1 at Anfield.

Aside from a few flashes from Nicolas Pepe and a late Lucas Torreira goal, Arsenal showed little attacking intent in what was a dominant display from Liverpool that further cemented their role as title chasers and the Gunners as top four candidates.

Liverpool lined up in their customary 4-3-3, yet throughout much of the game, the team’s shape resembled something closer to a 2-3-5, with Andrew Robertson and Trent Alexander-Arnold playing high and wide, allowing Sadio Mane and Salah to take up more advanced positions in central areas with Roberto Firmino dropping off. The attacking position of the fullbacks was both a reflection of Arsenal’s narrow defensive block and the tendency of both players to burst forward regularly.

Arsenal set up in a 4-3-1-2, with Dani Ceballos playing in the hole behind a front two of Pierre Emerick Aubameyang and Nicolas Pepe and ahead of a midfield three featuring Granit Xhaka, Matteo Guendouzi, and Joe Willock. In defense, Arsenal played in a narrow, deep defensive block with Ceballos dropping back occasionally and Pepe and Aubameyang given license to stay forward in the event of a counter-attack. The narrow shape was presumably fielded in order to congest central areas and deny Liverpool space, make it easier to win back the ball, and allow Arsenal’s pacey forwards to create chances on the break.

However, Liverpool are different from other top-six sides in the quality of fullbacks they possess. While defending narrowly does limit central space, it cedes space in the wide areas, and with fullbacks of the caliber of Robertson and Alexander-Arnold, Liverpool were able to consistently create chances despite Arsenal’s defensive strategy. Given that the Liverpool duo combined for 23 assists last season, this is of little surprise, and it’s somewhat surprising that Emery decided to employ a setup that his team was unfamiliar with and played into Liverpool’s strengths.

One could argue that their strategy could have worked. Had Pepe connected better with some of his shots or Aubameyang’s lifted chip over Adrian been more precise, the game could have been very different. For the majority of the first half, one could argue that Emery had been intelligent in his tactical decisions given the limitations of his side. Yet it felt inevitable that a Liverpool goal would come, not simply due to their attacking quality, but Arsenal’s defensive frailty.

The playing style Arsenal attempted is one that requires the utmost concentration, discipline, and awareness. Such attributes are certainly not characteristic of the Gunners in recent years, and it showed in the first half. Arsenal were dispossessed eight times in their own defensive third during the first half, a league record for the season. This is partly due to Liverpool’s superb pressing, but is also due to Arsenal’s own weaknesses. Whether it was Ceballos playing a risky ball that landed to the feet of an unmarked Sadio Mane, David Luiz’s shirt tug that conceded a penalty, or the constant miscommunication when defending set-pieces, Arsenal affirmed the idea that they simply don’t possess the players of the defensive caliber to remain a solid defensive team.

Regardless if Arsenal had been more clinical with their chances, Emery would have known this, and would have been hoping that – like Tottenham – Arsenal could rely on some luck and clinical finishing to come away with something to show for their efforts. Unfortunately for him, it didn’t work out.

In contrast, Liverpool were as imperious as ever, with Jurgen Klopp not needing to alter his tactics or selections all that much. Through domination in the wide areas, the exceptional movement of the front three, and the industry and energy of the midfield, Liverpool were able to control the game from start to finish. They were happy to sit back towards the end of the game, dealing with Arsenal’s attacks well and creating opportunities on the counter.

Klopp may be slightly concerned that his side are yet to register a clean sheet this season, and will be hoping that Alisson can return from injury soon to avoid moments such as Adrian’s misplaced clearance that was intercepted by Aubameyang. Yet on the whole, he will be delighted with his team’s performance and confident that they can mount another title challenge this season.

Ultimately the game was largely unsurprising. It was entertaining but generally one-sided. Arsenal will hope to have better results against local rivals Spurs while Liverpool will hope to continue their fine form into their future matches.