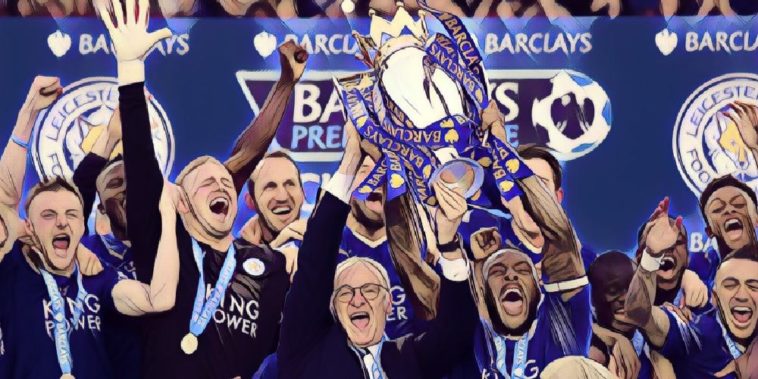 Sheffield United are taking the Premier League by storm this season, currently sitting in the top six despite it being their first season back in the top flight since 2006/07.

The Blades were playing in the third tier for a sixth successive campaign just three seasons ago, which makes their meteoric rise to the higher echelons of the top flight even more surprising.

There is still a while to go in the campaign and the wheels may well fall off the Bramall Lane clubs push for Europe, but for now they could be seen as one of the biggest surprise packages in Premier League history.

However, even if they do hold on, things could come crashing down next term and they could be seen as just another team who massively over achieved for a season.

It wouldn’t be the first time a team has massively over-achieved in the top flight since the formation of the Premier League in 1992, and here are the top five who have previously earned that tag.

Going into the first ever Premier League season, Norwich found themselves tipped for relegation by most pundits following a relegation scrap the previous season. The Canaries had finished 18th, after a 15th place finish the season before, and looked to be one of the teams who would struggle to stay in the top flight.

To make matters worse, Scottish international striker and top scorer for the last three consecutive seasons Robert Fleck forced through a move to Chelsea just before the season was due to start. So far, so bad for the Norfolk side.

They started the season looking every bit a side who would struggle when they went in at half time of their opening match 2-0 down to Arsenal. But, the introduction of new signing Mark Robins rejuvenated Norwich and the former Manchester United forward scored the first and last goals in a shock 4-2 victory.

The opening two months of the season saw Norwich far exceeding expectations, as only one defeat in ten matches saw them sit atop the Premier League tree.

Two heavy defeats halted their run of good form and they dropped a few places in the table. However, they continued to prove the doubters wrong and battled at the top end of the table for the remainder of the season.

A run of three defeats in four during the penultimate month of the campaign killed off any chances they had of seriously challenging for the title but Norwich held on for a third place finish, despite a negative goal difference, and qualification for the UEFA Cup.

Most people were surprised by this achievement and many critics claimed the Canaries had over-achieved. This was proven when a mid-table season followed and a 20th place finish the season after that saw them drop into the second tier for a run of nine seasons out of the top flight.

Nottingham Forest had finished in the top ten of the top flight for ten consecutive seasons before the Premier League started in 1992. This included three third placed finishes and several cup final appearances and successes.

However, everything went wrong for them in the first ever Premier League campaign and they found themselves relegated to the second tier of English football for the first time since promotion back in 1977. But, they returned to the top flight after just one season away.

Newly promoted sides were always tipped to struggle in the top flight, despite the fact Newcastle United had finished third in their first ever Premier League campaign the previous season. So, many believed Forest would be caught up in the battle for survival.

Forest were determined to prove the doubters wrong by reclaiming their place as one of the top sides in English football and got off to a flying start. Dutch forward Bryan Roy and young English striker Stan Collymore led the way as the Nottingham side went unbeaten in their opening 11 matches to sit second in the table.

Eventual defeat led to a run of six without a win and that then led to indifferent form which lasted for a few months. After a 1-0 defeat at Arsenal towards the end of February 1995, Forest still sat in an unexpected fifth position and things would get better from there as the club would not taste defeat again for the rest of the campaign.

Nine victories in a run of 13 matches unbeaten, including a 7-1 away win at Sheffield Wednesday, saw them finish the season in third place and secure qualification for the UEFA Cup.

Collymore ended the campaign with 22 league goals, earning him a then British record move to Liverpool for £8.5 million, and Forest were in the record books for matching Newcastle’s achievement of the highest ever Premier League finish for a newly promoted side.

This was an over-achievement which may have been the catalyst for a run of success and the following season wasn’t too much of a disaster, with a 9th place finish and a run to the Quarter Final of the UEFA Cup. But things went downhill the season after and Forest dropped down to the second tier with just six wins in a campaign that ended with them bottom of the table.

They have only played in the Premier League for one season out of the 23 since.

Ipswich Town had been a founding member of the Premier League in 1992/93 having won the old second division title the season before. But, in three seasons in the top flight, they had only managed to finish as high as 16th before eventually suffering relegation.

Five years later, the Suffolk side were back in the big time thanks to a Play-Off Final victory over Barnsley.

Tipped for relegation by everyone but the most die-hard Ipswich supporters, they started the season with a routine 3-1 defeat away at Tottenham. Just one win in their opening five matches saw the Tractor Boys sitting in 17th and looking likely to be involved in the expected relegation dogfight.

However, a run of just one defeat in ten games saw them shoot up the table and see in the new year as the fourth highest placed team in the English Football.

A lack of consistency caused a run of indifferent form until just one defeat in nine to end the season saw Ipswich qualify for the UEFA Cup for the first time since 1982 thanks to a fifth placed finish. It was the highest finishing position for a newly promoted team since Nottingham Forest in 1994/95 and no team has achieved a higher position at the end of a first season in the top flight since.

Marcus Stewart finished second in the race for the Golden Boot and boss George Burley was named Premier League Manager of the Season, but it all proved to be just a flash in the pan.

Second season syndrome kicked in for the following campaign and, despite several million pounds being spent on new players, Ipswich were relegated at the end of the 2001/02 campaign after an 18th placed finish.

Perhaps the biggest shock in Football history was when Leicester City won the Premier League title in 2015/16, making them the biggest over-achievers on this list.

Having been promoted to the top flight in 2014, after a ten year absence and just five seasons after playing in the third tier of English football, Leicester finished a respectable 14th in the 2014/15 season. This was, however, just six points above the drop zone and they were tipped to finish in a similar position at best at the end of the 2015/16 campaign.

Things could not have turned out more different though and Claudio Ranieri would lead his side to a shock Premier League title, an achievement that was priced at 5000/1 with bookmakers before the campaign began.

It was a record breaking season for Leicester City and their players. Jamie Vardy finished the season with 24 goals and broke the record for most consecutive games scored in when he found the net in 11 matches on the trot. The England striker would go on to be named Premier League Player of the Year, which wasn’t the only individual award to be given out to Foxes personnel.

Ranieri won the Premier League Manager of the Season award and Riyad Mahrez was named PFA Players’ Player of the year, becoming the first African player to do so.

Reality hit home the following season when Leicester found themselves in a relegation battle with just five wins in 25 matches, leaving them in 17th place when manager Ranieri was sacked in February 2016.

The change in management leading to a mini-revival and a 12th placed finish during their title defence season.

Burnley had previously played in the Premier League for a total of two seasons before 2016, ending both with relegation. So a 16th place finish in the 2016/17 campaign to avoid the drop was seen as a massive success. This meant they would play in consecutive top flight seasons for the first time since the mid 1970’s.

They were again favourites to be relegated, which made an opening day victory over defending champions Chelsea a huge shock. They proved it wasn’t just a one-off though, with an opening run of form which saw them lose just one match in their opening eight. This start to the season was even more impressive given that their first choice goalkeeper Tom Heaton suffered a season ending injury in just the fourth game of the campaign.

Understudy Nick Pope came in and impressed, with his form helping The Clarets to sit in the top six in the middle of December. They could have pushed for an even higher position but went on a run of 11 league matches without a win.

Burnley sat in seventh position from the end of January until the season came to an end. This was despite the aforementioned run of form and another poor patch which saw them fail to pick up a victory in their last five matches of the season.

A seventh place finish was enough for them to qualify for the Europa League qualifying rounds and earn them the chance of European football for the first time since reaching the Quarter Final of the UEFA Inter-Cities Fairs Cup in 1966/67.

However, their European adventure was over in the play-off round and a disappointing campaign followed in which the club finished just six points above the relegation zone in 15th.