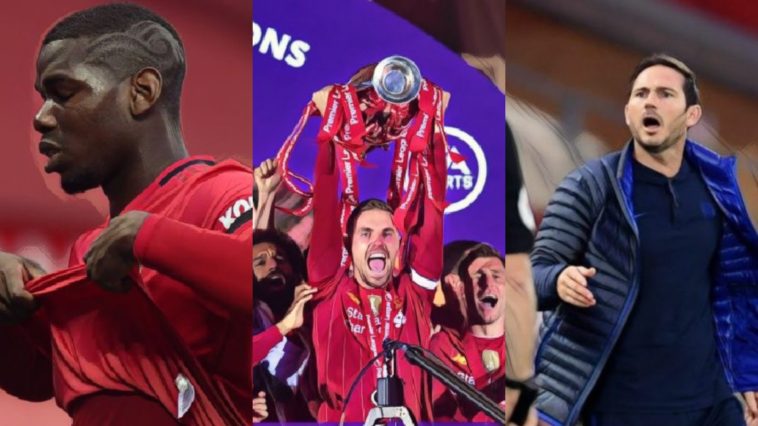 We reward the best – and worst – of the latest Premier League action with our weekly awards column, featuring Liverpool getting their hands on the holy grail, Raheem Sterling putting in another classy display, Paul Pogba auditioning to replace David De Gea, and Frank Lampard flies off the handle in gameweek 37.

They’ve waited thirty years, and at times this year it felt like it might not even come to fruition, but Liverpool lifted the Premier League trophy this week after absolutely dominating the division.

Sadly they did not get to celebrate it with their supporters, who had to settle for gathering outside the ground and setting off fireworks. But the scenes were special nonetheless and something they will cherish forever.

If there was such a thing as Best Player of Project Restart, then Raheem Sterling would probably get it. His brace against Watford took him up to eight goals since the Premier League returned, tied with Michail Antonio for the most in the league during that period.

Although his penalty took a little bit of the sheen off the display, he did at least make up for it by tapping home the rebound to make it another stellar performance from the Englishman of late.

There were some unbelievably good finishes in the Premier League this past week, but Trent Alexander-Arnold took the biscuit with his delicious free-kick against Chelsea on Wednesday night. The sound of the ball hitting the back of the net just made it all the sweeter.

Anything Keita can do… ?

Alexander-Arnold scores a wonderful free-kick but Frank Lampard is NOT happy! ?

Was it a foul on Mane?

In the lead-up to Wolves’ opening goal against Crystal Palace on Monday afternoon, Joao Moutinho chipped the most delightful little pass into the path of Matt Doherty, who set up Daniel Podence for the finish. The Portuguese maestro is 33-years-old and still producing moments of brilliance like that.

Assist of the Week

‘Captain America’ only played 32 minutes of the Liverpool-Chelsea thriller, but Christian Pulisic was arguably the best player on the pitch from that match. Shortly after coming on he danced around multiple defenders before laying the ball on a platter for Tammy Abraham to pass it home for the Blues’ second of three goals. It was surely one of the assists of the season.

The American missed a decent chance soon after, before finishing superbly in the 73rd minute despite being surrounded by defenders. His blistering form makes you wonder why they even need Kai Havertz next season.

There wasn’t much sympathy for Paul Pogba on Wednesday after he gave away a penalty by putting his arms up to block a fierce Declan Rice shot from range, although it’s not difficult to find fault with the arguments of his most fearsome critics, such as Gary Neville, on the issue. After all, when the choice is between a potential concussion and/or broken nose or not taking a speeding ball flat to the face, a lot of players – whether they admit it or not – are going to do the same thing that he did.

But it was still a huge mistake that could end up costing his team a place in next season’s Champions League. They’ve won just one of their last four matches in all competitions, but need at least a draw in their final game against Leicester City to secure a top-four finish.

Chelsea were unable to gain the point they need to secure a place in the top four following their 5-3 defeat to Liverpool, and it reflected poorly on manager Frank Lampard in more ways than one.

The Chelsea boss got his starting line-up badly wrong, with no clear idea of what he was trying to achieve tactically. He rectified that somewhat with his second-half changes, but they still conceded two goals after the interval and lost anyway.

But the real moment of donkey behaviour was caught on the sidelines when the cameras showed Lampard in a confrontation with Jurgen Klopp which will surely go down as one of the all-time great manager meltdowns. That didn’t provide a whole lot of context, but thankfully someone in the stadium filmed the incident from the stand:

While the audio quality is poor, we can make out that Lampard is obviously not happy with the free-kick that was just given (and subsequently scored by Alexander-Arnold), while Klopp tells his counterpart to “sit down”.

Lampard doesn’t, however, and walks away several times before coming back for more. On the last occasion he comes back, Lampard can clearly be heard to say “it’s not a f*cking foul, I’m not asking you”, before telling someone else “you can f*ck off as well.”

The highlight comes when Lampard says “you have your party later on, giving it the fucking big ‘un, f*ck off,” before saying something about “respect”. I think that ship sailed long ago, Frank.

Afterwards, Lampard tried to explain the confrontation by referring to the behaviour of the Liverpool bench, warning them not to “get too arrogant with” winning the league. I wonder if Lampard played under a manager known for disruptive and troublesome behaviour on the touchline, I can’t recall…

Read: The five most relegated clubs of the Premier League era

See Also: The most iconic football jerseys of the nineties