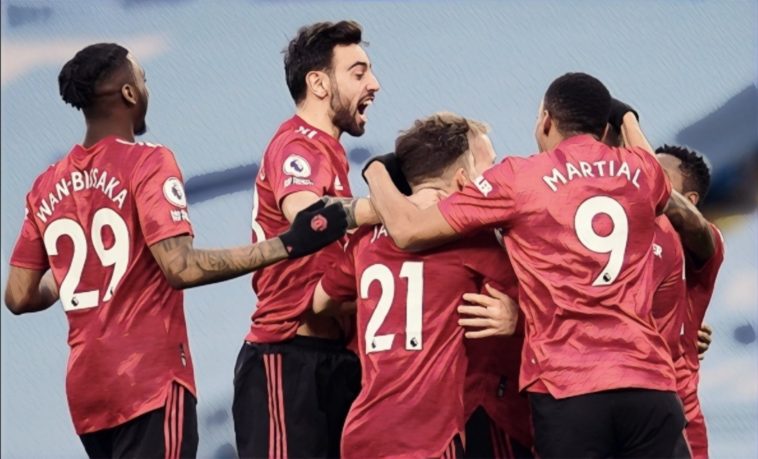 This week we look at Manchester United ending their rival’s phenomenal run, Liverpool losing yet another home match in 2021, and Harry Kane playing out of his skin.

Boring, boring Man United, they said. Invincible Man City, they said. And by ‘they’, I mean all of us. But to be fair, who foresaw a 2-0 win at the Etihad for the visitors?

Going back to November 2020, Man City went unbeaten for 28 games in all competitions, a run that featured 21 consecutive wins. Man United, on the other hand, were coming off the back of consecutive goalless draws, the latter of which saw them take a single shot on target against Crystal Palace.

The Red Devils had also won just one of their previous five matches heading into the Manchester Derby, while they had also failed to beat a Big Six club this season while scoring just one goal.

It seems, however, that Ole Gunnar Solskjaer has City’s number, in Eastlands at least. The Norwegian is the first manager in the club’s history to win his first three Manchester Derby away games. Indeed, Solskjaer is the only manager who has faced Pep Guardiola more than three times to have a winning record (4-3) against the Catalan.

Bruno Fernandes opened the scoring with a second minute penalty – virtually the exact same circumstance in which he last scored a goal against a Big Six side (vs Spurs in October 2020). The Portuguese playmaker has now converted 12 of his 13 penalties since joining the club last January. He also has 26 goal involvements (16 goals, 10 assists) in the Premier League this term.

On the opposite end of the scale is Luke Shaw, who scored his first goal of the campaign to seal the win for Man United. It’s only the second goal of his Premier League career, but his seventh goal involvement of the season – the most he has ever had in a single campaign.

United extended their unbeaten away run to 22 games, while also improving upon their mightily impressive record 103 league games unbeaten when leading at halftime (W91 D12). For City, this was the first time they have gone behind in a game since 23 January against Cheltenham Town in the FA Cup.

Following a 1-0 defeat to Fulham on Sunday, Liverpool created an unthinkable piece of history: they have lost six consecutive top-flight matches at Anfield for the first time ever. And this coming off the back of a 68-game unbeaten run at home.

Liverpool’s six home defeats equals the most they have ever suffered in a single campaign; the last time they did so was 1953/54, when they finished bottom of the top-flight. They are the first side to lose six in a row on home soil in the Premier League since Huddersfield Town in February 2019 (seven).

Most starkly for the reigning champions, since the New Year they have scored just one goal from 101 shots at home. You can probably do the maths, but that’s a conversion rate of one (1) percent.

📊 Six home league defeats in a row for the Reds – the first time that's EVER happened.

Fulham, who had lost their last six meetings with Liverpool before this season, earned their first win at Anfield since 1 May 2012. Having drawn at the Cottage back in December, this is the first time they have avoided defeat against the Merseyside outfit in a campaign since 2011/12 when they did the double over the Reds.

The Cottagers are the first newly-promoted side to win away at Liverpool in the Premier League since Blackpool beat Roy Hodgson’s Reds in October 2010.

The most consistent man in English football, Harry Kane put in a stellar performance against Crystal Palace on Sunday night. The England striker contributed directly to all four of Tottenham Hotspur‘s goals, providing brace of goals and assists each.

That brings Kane to 16 goals and 13 assists in the league this season. On top of that, Kane has been directly involved in 40 goals in 36 games in all competitions for Tottenham this season (24 goals, 16 assists), the most of any player for a Premier League club.

Son Heung-Min set up Kane for his second goal, which means the pair have now assisted one another for 14 Premier League goals this season, breaking Alan Shearer and Chris Sutton’s all-time competition record of 13 set in 1994-95 for Blackburn Rovers.

Tottenham’s fourth goal was their 100th in all competitions this season, becoming the second club in Europe’s big-five leagues to reach that tally in 2020-21, after Bayern Munich (106).

Despite playing in a cavernous bowl without fans, Spurs have won 24 points at the Tottenham Hotspur Stadium this season; only Man City have gained more points at home (35).

Read: The slow death of the selfish number 9: Why centre-forwards are going out of fashion

See Also: The most unfair Premier League results so far this season based on xG