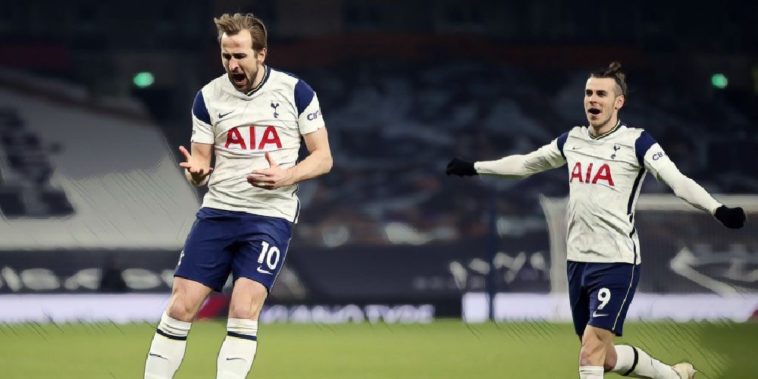 Harry Kane and Gareth Bale were the stars of the show as Tottenham beat Crystal Palace 4-1 at the Tottenham Hotspur stadium.

Spurs came into the game following a recent upturn in form following an indifferent spell at the end of January, while Crystal Palace were unbeaten in their last three as they look to keep their distance from the relegation zone.

It would be Jose Mourinho’s side who would take the lead midway through the first half, Luka Milivojevic getting caught on the ball by Lucas Moura as Crystal Palace tried to play out from the back. Moura fed striker Kane who registered his 13th assist for the season as he played the ball across the box for Bale who swept home at the back post.

Spurs looked in control for much of the first half, but one minute into added time Palace hauled themselves level. Milivojevic made up for his earlier error as the Serbian put in a delicious cross from the left which met by Christian Benteke, the Belgian rising high and despatching a solid header beyond Hugo Lloris, the striker unmarked seven yards out.

Parity didn’t last long though as Spurs regained the lead four minutes after the break. Bale was instrumental in the build-up, picking the ball up on the right, spraying the ball out to the left to Heung Min Son before bursting into the box. Son’s cross found Harry Kane at the back post, though the striker unselfishly put it back into the middle where Bale finished off the move that he had started.

Three minutes later and Spurs extended their lead, and having bagged two assists already, Kane got on the scoresheet with an absolute stunner. Some good one-touch football from the hosts ended with the ball at the feet of the 27-year-old who curled home a wonderful first-time finish following Matt Doherty’s cut back from 20 yards out.

Kane rounded off the scoring with 14 minutes left to play, finishing off a well-worked move. Erik Lamela lifted the ball over the Palace backline to Heung Min Son who played a first-time pass across the six-yard line to his strike partner, who nodded home unopposed to set a new Premier League record.

14 – Harry Kane and Son Heung-Min have now assisted one another for 14 Premier League goals this season, breaking Alan Shearer and Chris Sutton's all-time record of 13 set in 1994-95 for Blackburn. Telepathy. pic.twitter.com/rewuUwCxPG

Speaking afterwards, Jose Mourinho was pleased with his side’s reaction to conceding on the stroke of half-time.

“When you concede in the last minute of the first half, the tendency is to go into the dressing room with bad feelings and start the second half moaning about the goal,” he told Sky Sports.

“The way the team started the second half shows a little bit, the team is happier, is playing better, doesn’t feel that negative pressure. It was a good week for us. Next week we have a crucial match in the Europa League and a derby against Arsenal, nothing could be better for us than winning all nine points this week.

Asked about his half-time team talk, he said: “I told them at half-time I was very happy with the goal we conceded. They think I was crazy. I was not bluffing. It was proof to the players if you lose control and start dropping, they have one, two three crosses and it’s difficult to keep a clean sheet.

“That 1-1 put us in a position where we had to go forward. Because of the feeling of the first half, it was about 2-1, 3-1, and not 2-1 and drop back. I had a positive feeling about the goal we conceded and I think I passed the feeling to the players. They were relaxed and optimistic.”

The result lifts Spurs up to sixth, just a point behind Everton and two behind Chelsea, the pair set to meet at Stamford Bridge in what is shaping up to be an exciting race for the top four.