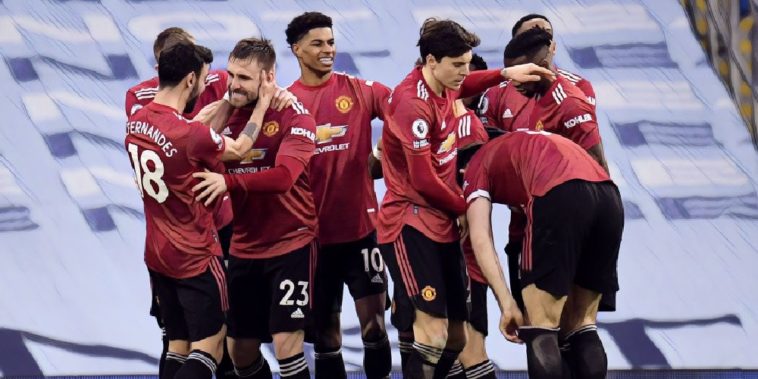 Manchester United moved back up to second with an impressive 2-0 win over league leaders Manchester City at the Etihad.

Both sides came into the game on the back of impressive runs of form, Manchester City having won a record-breaking 21 successive matches in all competitions, while Manchester United were unbeaten in their last 21 away matches before their short trip across the City.

The game got off to a frantic start, with Manchester United going straight onto the front-foot, and a clumsy challenge from Gabriel Jesus on Anthony Martial saw referee Anthony Taylor pointing to the spot after just 34 seconds. Bruno Fernandes strode up and did what he has so often done best, stepping up and despatching from the resulting spot-kick to give the Red Devils an early lead – the first time City had fallen behind in a game since November.

City looked surprised by Manchester United’s early positivity, though the league leaders finally settled into the game and began to exert the kind of dominance that we have become so accustomed to in recent months.

Dean Henderson – given a chance amid the continued absence of David de Gea – was relatively untroubled in the first half, though he did see a low Riyad Mahrez effort go narrowly wide, while Man City midfielder Rodri saw an effort clip the bar in the opening stages of the second period.

In the 50th minute, Henderson would spring an attack as he bowled the ball out to Luke Shaw who drove up-field before laying it into Marcus Rashford. The England international advanced into the box, cut onto his right, but instead of having a go himself, he laid it back off to Shaw who had continued his run, the left-back in space and able to take a touch before firing into the bottom corner to leave Ederson flat-footed.

City did start to turn the screw as the game drew towards its conclusion, substitute Phil Foden seeing an effort go wide, while the Red Devils were forced into some resolute defending to keep the league leaders at bay and maintain their clean sheet.

Ole Gunnar Solskjær is the first manager in Man Utd's history to win his first three Manchester derbies away from home.

Speaking after the game, manager Ole Gunnar Solskjaer was delighted with the performances of Luke Shaw and Anthony Martial especially considering both players were a doubt going into the game.

“Delighted. I’d say you get the first goal, we were on the front foot for 10-15 minutes but then the last half hour of the first half I felt we played too much on the result,” he told BBC Sport. “Sometimes when you defend against strong teams inevitably they create chances. We had to get to half time to get hold of everyone again.

“The second goal was magnificent. Luke [Shaw] just showed what he is about. He was a massive doubt this morning and had to go through a fitness test to play. What a performance.

“I thought we defended really well, we were more like ourselves with the ball attacking wise.

“Anthony Martial was man of the match and he was an even bigger doubt than Luke. That was the Anthony we know, strong positive and taking players on. Delighted for him.”

The result moves United back up to second and cuts the lead to City at the top to 11 points with 10 games to play.

“They [Manchester City] are so far ahead you can’t really think about anything but making sure we win our games and be better than last year. We were third so we want to move up the table of course.”

Solskjaer’s side face AC Milan in the Europa League in midweek.