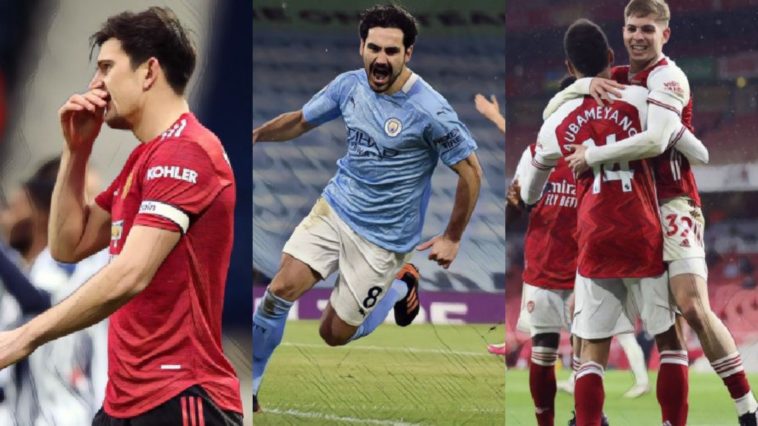 This week we look at Manchester City’s ridiculous run of form, Manchester United dropping more points, a major milestone for Arsenal’s star striker, Fulham complete a first in their history, and the badness of a Zaha-less Crystal Palace.

City’s Gun-man shoots them ahead

Ever since Tottenham Hotspur beat Manchester City 2-0 back in November, both teams have gone on completely opposite trajectories. Spurs appeared to be on the rise, but have majorly regressed instead, while City have surged ahead to take a decisive lead at the top of the table.

While Spurs have won just four of their 14 league matches since then, Man City have won 12 of 14, drawing the other two. Indeed, they are now unbeaten in 23 games in all competitions and have 16 in a row in domestic competitions, an English record.

Even more impressively, Man City have not trailed for a single minute since that defeat at the Tottenham Hotspur Stadium. Only Arsenal can claim to have embarked on a longer run of successive games without going behind, a streak that lasted 19 games between December 1998 and May 1999.

They are also the first side to keep 14 clean sheets from their opening 23 Premier League games in a season since Manchester United (17) and Chelsea (14) in 2008-09.

The leading light behind City’s excellent form has been Ilkay Gundogan, whose nine goals scored in 2021 is the most of any player in Europe’s top five leagues in this calendar year. The German midfielder is now on 11 league goals for the season, the first time he has reached double digits in a single campaign – and all since 15 December.

Jose Mourinho’s side are now skating on thin ice with regards the top four race. Spurs have lost four of their last five Premier League games, as many defeats as in their previous 28 league matches. That leaves them in ninth place and four points off Liverpool in fourth.

Following their 1-1 draw with West Brom on Sunday, Manchester United have now gone 19 away games unbeaten in the league, a club record. They are also only the fourth team to avoid defeat in their first 12 away Premier League games of a season: Arsenal in 2001/02 and 2003/04 and Liverpool in 2019/20, all of whom went on to win the title.

However, they have won just one of their last five Premier League games (D3, L1) with their only win the 9-0 victory over Southampton, dropping nine points in the process. Bruno Fernandes‘ equaliser, though, does mean that United have recovered 22 points from losing positions this season, ten more than any other team.

The Portuguese playmaker has been directly involved in 38 Premier League goals in 38 appearances for Manchester United (22 goals, 16 assists). The only player in Premier League history with more goal involvements in his first 38 games is Andrew Cole (46 in 1993/94 for Newcastle).

Left-back Luke Shaw set it up for Fernandes, his fifth Premier League assist of the season, the most he’s ever managed in a single season. In fact, Shaw only had seven assists in 156 Premier League appearances before this campaign.

Meanwhile, West Brom have won only one of their 11 Premier League matches under Sam Allardyce (W1 D3 L7), shipping nine more goals than any other team since his first match in charge (29). The Baggies have also lost 12 points from winning positions this season. Sinking.

In scoring his first hat-trick for Arsenal during a 4-2 win over Leeds United, Pierre-Emerick Aubameyang broke the 200 goal barrier in his career. His 201 goals in 369 appearances makes him one of just nine players to score 200+ goals across Europe’s big five leagues.

With love in the air, Aubameyang became the third player in Premier League history to score a hat-trick on Valentine’s Day, after Matt le Tissier vs Liverpool in 1994 and Michael Owen vs Sheffield Wednesday in 1998.

Aubameyang's hat-trick today was #Arsenal's 40th in the Premier League – no side has scored more.

He was also the 21st different player to score a PL hat-trick for Arsenal, two more than any other side.

As for Leeds, their woeful form in London continued. The Whites have won just one of their last 24 away league games in London (D6 L17), losing all four such matches this season by an aggregate 14-4 score.

Every team has a bogey ground, but Goodison Park might be the ultimate one for Fulham. Before Sunday’s visit to Merseyside, the Cottagers had never won there in league competition in 27 attempts. Their last win there came in the FA Cup all the way back in 1975, the same year they reached the final.

On the 28th attempt the SW6 outfit finally got that victory, winning 2-0 thanks to a Josh Maja brace. Coming into this fixture Fulham had lost each of their last 22 away league games against the Toffees.

The curse is over 🙌 pic.twitter.com/OshMwvtBQ4

This was their first Premier League victory since November 2020, when they beat Leicester City 2-1 at the King Power, ending a run of 12 games without a win in the competition (D8 L4).

The man of the hour, Maja (22 years and 49 days) became the second-youngest player to score on his first Premier League start for Fulham, after Collins John against Blackburn in April 2004 (18 years and 178 days). The striker is also just the second Nigerian player to score a brace on his first Premier League start, following Efan Ekoku for Norwich City back in May 1993.

Up next for Fulham is a midweek trip to Turf Moor, where they haven’t beaten Burnley since April 1951. Is another hoodoo about to come to an end?

Burning down the Palace

After being thoroughly outplayed by Burnley during a 3-0 loss on Saturday, Crystal Palace fell to their third consecutive defeat. The Eagles were completely toothless in attack without their main man, Wilfried Zaha. The South London outfit have lost 18 of their last 20 league games without Zaha, failing to score in 16 of those 18 defeats.

Winning so convincingly away from home was an unusual occurrence for Burnley. The Clarets’ three goals here was as many as they had managed in their previous ten away league games combined. This was the first time they had managed three goals in a road game since November 2019, when they beat Watford by the same scoreline.

See Also: Why Leicester’s Izzet-and-Heskey-inspired cup specialists are so beloved