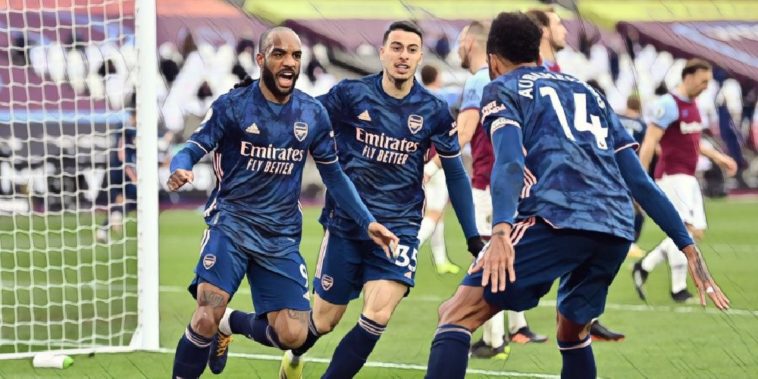 It turns out that three really is the magic number, this season at least. Arsenal’s comeback from 3-0 down to draw against West Ham United was the third time this season a team has been trailing by three and managed not to lose. The other two games were West Brom 3-3 Chelsea and Spurs 3-3 West Ham.

The last time the Gunners avoided defeat when behind by three goals was January 2017 when they drew 3-3 with Bournemouth. This was the first time the Hammers failed to win after going three goals ahead since losing 4-3 to Wimbledon in September 1998.

Worryingly for Mikel Arteta, his men have failed to keep a clean sheet in any of their last 12 matches in all competitions, conceding 17 goals. Their last shutout was a goalless draw with Manchester United on 30 January.

West Ham, who hit the woodwork a league-high 19th time on Sunday, have beaten Arsenal just once in their last 11 meetings, and have failed to beat their London rivals in each of the past two seasons (three draws, one defeat).

It was a pretty bad week for Tottenham Hotspur, having both lost the north London derby and getting knocked out of the Uefa Europa League by Dinamo Zagreb. It felt like a breaking point for Spurs fans, who were calling for Jose Mourinho’s head.

However, the Lilywhites’ form, in the Premier League at least, has improved markedly of late, having won four of their last five matches after beating Aston Villa 2-0. That’s as many as they had achieved in their previous 15 league matches beforehand (four wins, four draws, seven defeats). It should be noted that three of those wins came against Burnley, Fulham and Crystal Palace, though.

Villa are on the opposite end of the scale, though, as they are winless in four league games (two draws, two defeats). This is their longest such run of the season, and they have only managed to score once during this stretch.

Tottenham, who moved above Liverpool into sixth in the table, have now won six consecutive away games against Villa. They are just the third side to do this, after Manchester United (2003-07) and Liverpool (2011-19).

Leeds United’s 2-1 win against Fulham at Craven Cottage marked a number of mileposts for the Yorkshire outfit, beyond effectively sealing their safety now that they have secured 39 points.

For one, it ended Leeds’ hoodoo in the capital, winning their first game in London since December 2017. On that occasion they also defeated south west London residents, beating QPR 3-1 in the EFL Championship. In that time they had failed to win in 17 attempts, with Marcelo Bielsa overseeing 15 games during that winless run (two draws, 13 defeats).

It was also the club’s seventh away win of the season, the most by a newly promoted side since 2005/06, when Wigan won eight and West Ham won seven.

The victory also upheld the team’s remarkable record whenever they have gone ahead under Marcelo Bielsa. Leeds have taken the lead 74 times since he arrived and he has failed to win on just seven occasions (five draws, two defeats).

Meanwhile, Patrick Bamford continued his great season by providing a goal and an assist on Saturday, bringing his tally to 14 goals and six assists. That makes him the first Leeds striker to have 20 goal involvements at this stage of a Premier League season since Jimmy Floyd Hasselbaink in 1998-99.

Patrick Bamford is the first Leeds player to score in four consecutive league games against the same team since Luciano Becchio vs Middlesbrough between 2010 and 2012. #lufc

Despite their performance improving considerably since the early months of the campaign, Fulham have still only won three matches since November.

More worryingly still, the Cottagers have lost ten home matches this season, second only to Sheffield United (11) in the league. The last season in which they lost more was 2013/14, when they were relegated with 11 home defeats.