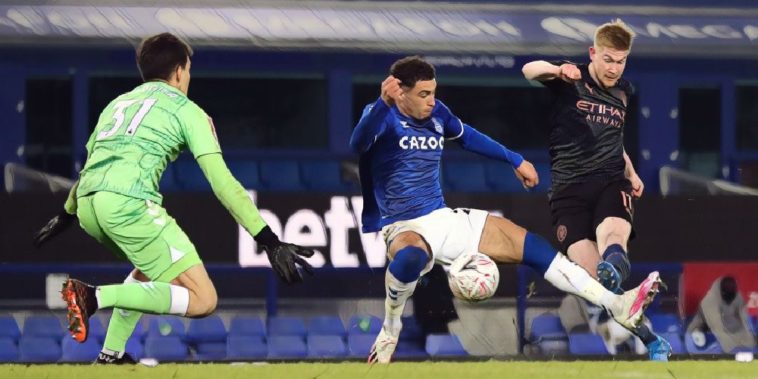 You may moan and groan about the FA Cup interrupting your regularly scheduled Premier League action, but the quarter-final weekend offered up some quite good football.

There were some sublime goals and magic moments as the final four teams of the tournament were decided. We’ve picked out some of the highlights from the four encounters over Saturday and Sunday.

Fred effs it up as Man Utd exit the cup

For the first time since the beginning of last season, Manchester United will not contest the semi-final of a knockout competition. Instead it will be Leicester City taking the Red Devils’ usual place in the last four following a 3-1 victory for Brendan Rodgers’ side at the King Power Stadium.

The tie got off to the worst possible start for the visitors when Fred attempted an inexplicable back pass to goalkeeper Dean Henderson, which Kelechi Iheanacho intercepted to open the scoring.

Man United equalised before half-time through Mason Greenwood, but Leicester were the better side overall. Iheanacho set up Youri Tielemans for the second before killing the tie with another goal with twelve minutes to go.

The Foxes, who have never won the competition, will now face Southampton in the semi-finals.

Quadruple still on the cards for Man City

Everton put in a spirited defensive performance on Saturday evening, but, like Thanos in the MCU, Ilkay Gundogan and Kevin De Bruyne are inevitable.

The German headed home from a rebound to break the deadlock, before De Bruyne supplied a sublime strike late on to seal Manchester City’s passage to the next round. What a player the Belgian playmaker is.

The result means Everton are still waiting for major silverware, 26 years on from their shock win over Man United in the FA Cup final.

Southampton summoning the spirit of ’76?

Their form in the Premier League has been wojous of late, but Southampton are marching on in the FA Cup after beating rivals Bournemouth 3-0 at the Vitality Stadium.

The man of the match was Nathan Redmond, whose brilliant brace equalled the amount of goals he had scored in all competitions this season (two in previous 34 appearances). The winger, who also assisted Moussa Djenepo’s opener, scored this absolute peach of a solo effort.

It continues the Premier League side’s impressive run in the cup, having knocked out Shrewsbury, holders Arsenal, Wolves and now the Cherries by an aggregate scoreline of 9-0.

The last time the Saints went four straight FA Cup games without conceding was in the 1975/76 season. And you know what happened that year? They only went and bloody won the whole thing.

Underdog winners are few and far between these days – 23 of the last 25 FA Cups have been won by the ‘Big Six’ – but Southampton are just two wins away from being one.

Five of the best FA Cup quarter-final clashes ever

Super Ziyech seals it for Chelsea

Ben Chilwell’s deflected shot gave the west London outfit a first-half lead, but Hakim Ziyech’s injury-time goal to seal the victory was the highlight of the game.

A swift counter-attack wrapped up with a quick-witted finish by the Moroccan playmaker. Now Chelsea just have to beat Man City in the semi-final to reach a second successive FA Cup decider at Wembley.