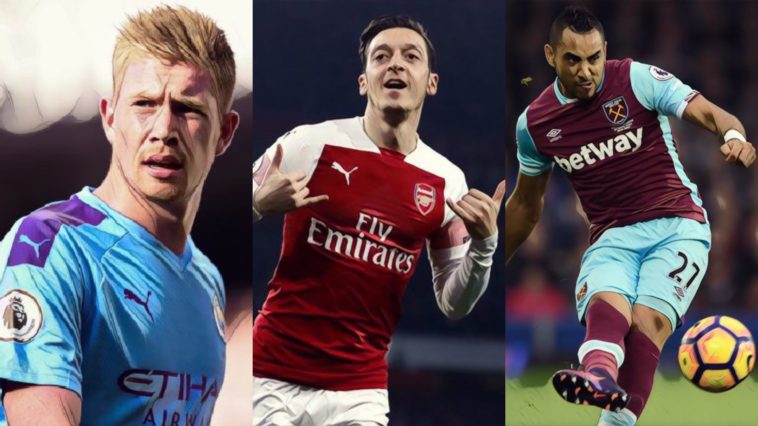 After months of speculation and a situation which became farcical for all of those involved, Mesut Ozil’s career with Arsenal has finally reached its conclusion following a mutual agreement to terminate the contract of the highest-paid player in the Gunners’ history.

Ozil was the signing that was supposed to reinvigorate Arsenal’s hopes of challenging for major honours following a club-record arrival from Real Madrid seven-and-a-half years ago, though his latter years have seen him become an increasingly peripheral figure.

Recency bias can often lead to tainted perceptions but Ozil was once one of the Premier League’s best creative talents, a player who often produced moments of brilliance and who possessed a vision and technique few could rival.

Following Ozil’s exit we’ve decided to look at the most productive players in the division’s history, so here are the creative forces that have set up the most chances in a top-flight campaign since Opta began tracking such data.

The most chances created by a player in a Premier League season:

Chelsea enjoyed a superb first season under the guidance of Carlo Ancelotti in 2009/10 to secure a domestic double and score over a century of Premier League goals, but despite an initial bright start the west London side struggled to reproduce that form the following season.

Whilst several notable names saw their performance levels dip, Florent Malouda remained a figure of consistency in Ancelotti’s Chelsea side and one of the division’s most creative talents.

The France international finished ahead of the likes of Didier Drogba and Frank Lampard as the Blues’ leading scorer in the Premier League with 13 goals, in addition to creating a huge 118 chances for his teammates.

Despite the wealth of opportunities created, however, Malouda incredibly finished the season with just four assists, a figure level with the likes of Blackpool’s Gary Taylor-Fletcher and Chelsea teammate Branislav Ivanovic.

Florent Malouda discusses his experience of discrimination in football and the need for unity. #NoToRacism pic.twitter.com/zvTtqFNMry

Every so often a player arrives in the Premier League who simply provides box-office viewing, and Dimitri Payet’s brief but brilliant spell most certainly left plenty of memorable moments for the Hammers’ support.

Few could have anticipated the Le Havre product’s impact upon his arrival from Marseille ahead of the 2015/16 season, but the summer signing quickly established himself as one of the most exciting and talented players in the division.

There were exquisite pieces of skill, fabulous free-kicks and high-quality end product throughout the course of a campaign that saw the midfielder nominated for the PFA Player of the Year, with just two players providing more than his 12 assists following an incredible 119 chances created.

Sadly it all turned sour for a player who became an instant Hammers’ hero, the silky skills of the flamboyant Frenchman ensuring he retains a huge affection in the eyes of many Premier League fans.

Frank Lampard’s legend is often centred around his brilliant ability to score goals from midfield, his knack of ghosting forward into dangerous areas seeing him become the greatest goalscorer in Chelsea history and the fifth-highest amongst all Premier League players.

Whilst that prolific record may be the defining feature of Lampard’s game, the midfielder was also an underrated creative presence and finished as the Premier League’s leading assist provider on three occasions, including during Chelsea’s title successes in 2005 and 2010.

4. 24 of Frank Lampard’s assists for @ChelseaFC were delivered to @didierdrogba – a record for one player to another pic.twitter.com/ZxLsN6Eylc

The most productive season of his career in terms of creating chances came in 2008/09, however, with the former England international providing 134 opportunities for his teammates as the west Londoners finished as runners-up.

He again finished that season with the most assists in the Premier League after registering 10 for the campaign – a figure level with Arsenal forward Robin van Persie.

Widely regarded as the Premier League’s best creative talent at present, Kevin De Bruyne ranks second for the most chances created in a Premier League season following a brilliant individual campaign in 2019/20.

De Bruyne has set extraordinary creative standards since returning to the Premier League with Manchester City in 2015, becoming the fastest player in history to reach 50 assists and moving into the division’s all-time top 10 following a wonderful outside-of-the-foot cross to John Stones in midweek.

De Bruyne equalled the Premier League’s single season assist record last season to be named as the PFA Player of the Year, providing 20 assists after creating an astonishing 136 chances throughout the campaign.

The 29-year-old is the only player in history to have provided 15+ assists in three separate seasons and looks on course to reach that landmark once more, his ability to prolifically create chances seeing him register 10 in just 15 league starts so far this season.

Mesut Ozil departs the Premier League holding the record for most chances created in a single season, the midfielder’s brilliant 2015/16 season the zenith of his Arsenal career.

The German was sensational throughout the campaign to be named as Arsenal’s Player of the Season and be shortlisted for the division’s Player of the Year accolades, his 19 assists seeing him fall just short of equalling the all-time record set by Thierry Henry and later matched by Kevin De Bruyne.

This was the campaign that most expected from Ozil when he became the most expensive player in the north London side’s history, the artistry of the World Cup winner evident as he dissected defences with pieces of invention and ingenuity.

🔙 Throwback to this Mesut Ozil goal against Ludogorets back in 2016.

Ozil created 146 chances throughout the season with 93 of those coming from open play, leading Europe’s top five leagues for chances created and setting a new Premier League record.

His performances would decline in the seasons since, but the 2015/16 version of Ozil was unquestionably one of the continent’s finest playmakers.

See Also: Wayne Rooney: The tenacious street footballer with the mind of a manager