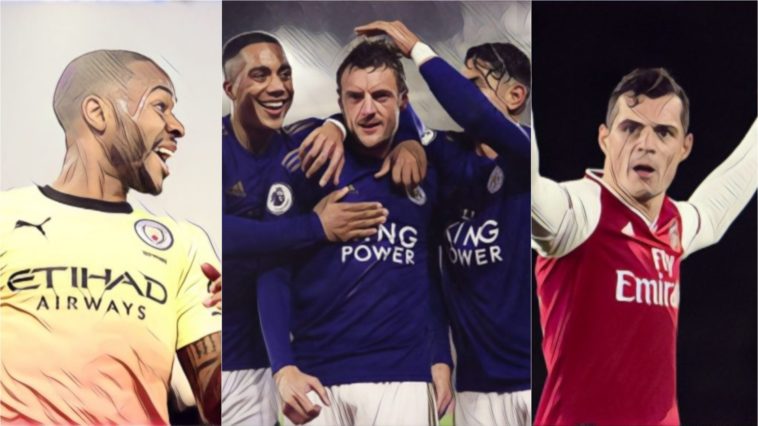 We’ve had a whole week to deliberate on who were the winners and losers in the Premier League from October, a month in which Liverpool extended their long unbeaten run, Chelsea furthered their credentials under Frank Lampard, Spurs continued to be bad, and Arsenal just completely imploded.

It would be hard to beat Leicester City equalling the record for biggest margin for victory in the Premier League, beating Southampton 9-0, almost exactly a year since the untimely passing of their chairman, Khun Vichai.

Player of the Month – Jamie Vardy

In the same vein, Jamie Vardy has been in great form for the Foxes this past month. The former English international got a hat-trick in that game against the Saints, following up the goal he scored in the 2-1 win over Burnley.

As he’s gotten older, Vardy’s involvement in general play has decreased, but manager Brendan Rodgers has deployed the striker in such a way that his only concern is to get good shots off.

Leicester have been relatively conservative so far this season, which may sound strange to say about a side that has scored 27 times in 11 league fixtures, but they’ve done very well out of their number 9’s supremely clinical finishing – he scored four times from four big chances in October.

Goal of the Month – Bernard vs West Ham

Vardy may have had the most goals last month, but Everton‘s Bernard arguably had the best.

The Brazilian was seemingly one-on-one with the West Ham goalkeeper, then mystifyingly cuts back in, before presumably realising the mistake he’d made and going back out again. By this stage he’s actually turned it into a more difficult chance, but he somehow squeezes past the goalie at an impossibly cute angle.

Pass of the Month – Raheem Sterling vs Crystal Palace

For those who think Raheem Sterling only offers speed and tap-ins, check out this perfectly weighted chip pass to set up David Silva for Manchester City’s second goal against Crystal Palace.

CITY AT THEIR BEST! 🤩

Miss of the Month – Tom Davies vs West Ham

Tom Davies had a great game against West Ham last month, but he somehow conspired to miss a gilt-edged chance against the Hammers; he received a low cross just three yards out from goal, but tapped it straight back to the goalkeeper. Luckily for him, it didn’t cost the Toffees any points.

Save of the Month – Tim Krul vs Man United

In a perverse way, Tim Krul had a great game against Manchester United last month. The Dutchman made eight saves on the day, two of which were penalties. It was his best performance since setting the record for most saves in a single Premier League game (14) back in 2013. And yet, his team still lost 3-1.

The showreel save came when Anthony Martial diverted Marcus Rashford’s cross with his head just four yards from goal, but the shot-stopper was equal to it, pushing it over the bar. Krul will earn plenty of plaudits over the course of the season, but it’s going to be a long one for him.

Stat of the Month – Sheffield United

This remarkable Sheffield United statistic has since grown to 59 matches since the Blades last lost a match by more than a single goal.

Now 58 matches in all competitions since Sheffield United last lost a match by more than a single goal.

Howler of the Month – Foster & Femenia vs Spurs

Just five minutes away from getting their first win of the season, Watford‘s Ben Foster and Kiko Femenia had a collective brainfart to gift Dele Alli the equaliser for Tottenham Hotspur. To be fair to the goalkeeper, it does look like he made the call to collect the ball, but it was a costly mistake for the Hornets nonetheless.

Donkey of the Month – An Arsenal Triumvirate

A trio of donkeys took the biscuit in October: Granit Xhaka, Unai Emery and the Arsenal supporters who booed the former.

Xhaka has since published an ‘apology’ (not that he necessarily should have given one) for goading the supporters as he was being subbed against Crystal Palace, while the Arsenal manager has also taken the captaincy off the Swiss midfielder, both of which have only managed to compound the issue.

A mountain has been made out of a molehill, and it could have far-reaching effects on the rest of the season. It appears the north London club are already making contingencies for the Spaniard’s departure.

See Also: The 16 players to have scored 25+ goals in a single Premier League season