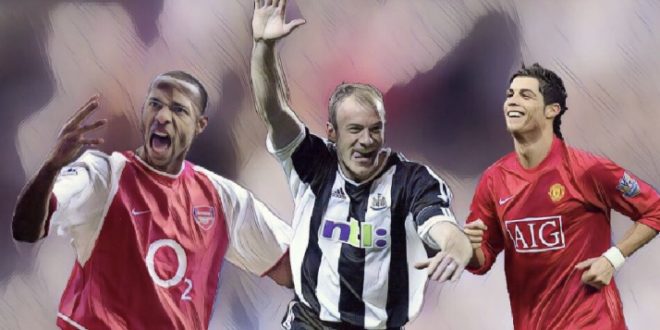 Since its formation in 1992, the Premier League has seen its fair share of great goal-getters.

Few players are as idolised as much as those capable of hitting the back of the net with regularity, and we’ve decided to celebrate some of the league’s finest finishers.

Throughout the division’s history, just 16 players have hit 25+ goals in a single Premier League season, which makes it quite the exclusive club…

The Norwich City forward plundered 25 goals in the 1993/94 season, winning the club’s Player of the Season award after a prolific campaign.

Despite netting 25 times, Sutton finished joint-third in the race for the Golden Boot, though he would later win the accolade with a tally of just 18 four seasons later.

Sutton’s feats soon attracted the attention of ambitious Blackburn Rovers, who paid £5m for the striker to make him the most expensive player in English football history at the end of that season.

Le Tissier’s goals helped keep the Saints in the top flight, Southampton narrowly avoiding relegation to the second tier by finishing just one point above the relegation places.

The seventh-highest goalscorer in Premier League history, Liverpool favourite Fowler truly announced himself in English football by hitting 25 goals in the 1994/95 season.

Still just a teenager, the precocious talent finished as runner-up for the Golden Boot and ended the season by being named the PFA Young Player of the Year.

Having joined boyhood club Newcastle in a then world-record £15m deal in 1996, Shearer celebrated his return to Tyneside by firing 25 goals in 1996/97.

Shearer’s total were enough to see him pip Arsenal’s Ian Wright to the Golden Boot, winning the honour for a third consecutive season after twice achieving the feat at former club Blackburn.

Van Nistelrooy had missed out on the Golden Boot by just one goal the previous season, but the Manchester United striker was not to be denied in 2002/03.

Van Nistelrooy hit 25 goals in a stunning campaign, firing United to the Premier League title. His prolific season also saw finish as the top scorer in both the FA Cup and Champions League, finishing with 44 goals in all competitions.

Often regarded as the Premier League’s greatest ever player, Arsenal star Henry reached the 25-mark in 2004/05 to win the second of three consecutive Golden Boots.

A four-time winner of the award, Henry is the highest-scoring foreign player in Premier League history.

Tottenham’s Kane hit 25 goals for the first time in his career in 2015/16, finishing just one goal ahead of Manchester City’s Sergio Aguero and Leicester’s Jamie Vardy to claim a maiden Golden Boot.

Having failed to establish himself at Chelsea, Romelu Lukaku showed English football he belonged at the top level with prolific loan spells at West Brom and Everton.

The latter secured his services permanently, and the big Belgian hit 25 goals in a superb season in 2016/17. Lukaku would finish as runner-up for the Golden Boot, though his prolific season at Goodison Park persuaded Manchester United to part with £75m to take him to Old Trafford that summer.

Cristiano Ronaldo’s world-record departure to Real Madrid in 2009 placed added responsibility on the shoulders of Rooney at Manchester United, who responded with the most prolific season of his career at that time.

Rooney would hit 26 Premier League goals, though his efforts were not enough to secure a fourth consecutive title for Sir Alex Ferguson’s side as Chelsea completed a domestic double.

His individual performances were rewarded, however, being named PFA Player’s Player and FWA Footballer of the Year.

Having won just one FA Cup in eight seasons at in North London, Arsenal captain Van Persie made the controversial move to rivals Manchester United in 2012 in search of silverware.

The Dutchman had just won a PFA Player’s Player and FWA Footballer of the Year double after a stunning season in which he won the Golden Boot, an honour he would win once more after hitting 26 goals in his debut season at Old Trafford.

Van Persie’s tally fired United to the title, the championship sealed with a memorable hat-trick against Aston Villa.

One of just two players to have scored over 20 goals in five consecutive Premier League seasons, Manchester City star Sergio Aguero has been a reliable and prolific goalscorer since arriving in English football in 2011.

His highest tally came in 2014/15, the Argentine hitting 26 goals to win the Golden Boot ahead of the likes of Harry Kane, Diego Costa and er, Charlie Austin…

A second appearance for Henry on our list, who’s 27 strikes in 2005/06 saw him win a third successive Golden Boot, whilst also earning him the honour for a record fourth time.

At his peak, Henry was unquestionably amongst the world’s best players, finishing as England’s top scorer four times in just five seasons.

The finest goalscoring season of Rooney’s Premier League career, the Manchester United forward hit 27 goals as United were narrowly pipped to the title by Manchester City.

Rooney’s 27th goal of the season looked to have the title heading to Old Trafford on the final day, but for Sergio Aguero’s late, late intervention to seal title success on goal difference for City.

The Chelsea icon fired 29 goals for Carlo Ancelotti’s free-scoring side in 2009/10, including a hat-trick in an 8-0 final day thrashing of Wigan as the West London side secured the title.

His tally earned him the Golden Boot for the second time in his illustrious career, and further team success would follow as Chelsea secured a domestic double with FA Cup success.

A second successive Golden Boot for Kane in 2016/17, who remarkably hit seven goals in Tottenham’s final two games of the season to overtake Romelu Lukaku and Alexis Sanchez for the award.

Spurs would finish the season with 6-1 and 7-1 thrashings of Leicester and Hull respectively, Kane helping himself to a bagful as Mauricio Pochettino’s side finished as Premier League runners-up.

Having fired Sunderland to promotion the previous season, Phillips made an immediate impact on the top flight, winning the Golden Boot in his first season with a tally of 30 goals.

Phillips’ goals helped Peter Reid’s newly-promoted side to a seventh-placed finish, whilst his tally earned him the prestigious European Golden Shoe as the continent’s top scorer.

He remains the only Englishman to have won the accolade.

The inspiration behind Arsenal’s famed ‘Invincibles’ season, Henry hit a personal-best 30 goals in 2003/04 as Arsene Wenger’s side completed a historic unbeaten campaign.

Henry’s goals helped Arsenal to secure the league title, his outstanding performances rewarded by being named the PFA Player’s Player of the Year and FWA Footballer of the Year for the second successive season.

Having developed from troubled but talented winger into one of the Premier League’s leading forwards, Van Persie enjoyed the best individual season of his career in his final campaign at Arsenal.

Promoted to club captain following Cesc Fabregas’ departure to Barcelona, Van Persie fired 30 goals in a stunning season which saw him claim a PFA Player’s Player of the Year and FWA Footballer of the Year double.

Remarkably, Kane’s tally was not enough to secure a third consecutive Golden Boot, only the second time a player has hit the landmark and failed to win the accolade.

Having scored an all-time record of 260 Premier League goals, it’s fairly safe to say that Alan Shearer knew where the net was.

The forward saw his first season at Blackburn interrupted through injury, but responded once fully fit the following campaign with his first ever haul of 30.

His goals were not quite enough to fire Blackburn, backed by Jack Walker’s millions, to the league title, the Lancashire side finishing runners-up to Manchester United.

Shearer’s 1993/1994 tally was also the first season a player scored 30 league goals and failed to win the Golden Boot.

That man again, Shearer hitting 30+ goals for the third consecutive season in his final season as a Blackburn player.

Shearer’s 31 goals came in just 34 league appearances, prompting boyhood club Newcastle to take him to St James’ Park for a then world-record fee that summer.

His stunning season saw him claim a PFA Player’s Player of the Year and FWA Footballer of the Year double, before winning the first of his joint-record five Ballon d’Or’s later that year.

Of that total, 31 came in the league, making him just one of four players to reach the 30-mark in a 38-game league season.

Striking up a prolific partnership with Daniel Sturridge, Luis Suarez enjoyed his finest season as a Liverpool player in 2013/14, the Uruguyan’s prolific campaign seeing Brendan Rodgers’ side narrowly miss out on the title.

Having missed the opening games of the season through suspension after biting Chelsea’s Branislav Ivanovic, Suarez returned in inspired form and scored 31 goals in just 33 games for the Merseyside club.

Suarez was rewarded for his displays with a PFA Player of the Year and FWA Footballer of the Year double, adding to his Golden Boot and European Golden Shoe.

Liverpool’s decision to spend £36m on bringing Mohamed Salah back to the Premier League was questioned by some, the Egyptian winger having struggled to make an impact during a previous spell at Chelsea.

Those doubts were soon removed, as Salah embarked on the most prolific 38-game season in the division’s history.

No player has ever scored more since the league’s change to a 20-team division, Salah’s remarkable 32-goal season culminating in a clean sweep of the Player of the Year awards at the season’s end.

The joint-record for a Premier League season, Newcastle forward Andy Cole hit 34 goals during the 1993/94 season. Then a 42-game competition, Cole’s goals fired newly-promoted Newcastle to a shock third-place finish, with the forward being named as the PFA Young Player of the Year.

Remarkably, Cole also finished as the season’s top assist provider, in a stunning individual campaign for the then 22-year-old.

Cole’s tally was part of a career that saw him hit 187 Premier League goals, the third-highest total in the division’s history.

It seems fitting that the Premier League’s greatest goalscorer should complete our list, after Shearer hit a joint-record 34 goals in 1994/95 to fire Blackburn to the title.

Having helped Blackburn to their title triumph, the forward was also rewarded with the PFA Player of the Year award, the first of two he would win during his memorable career.