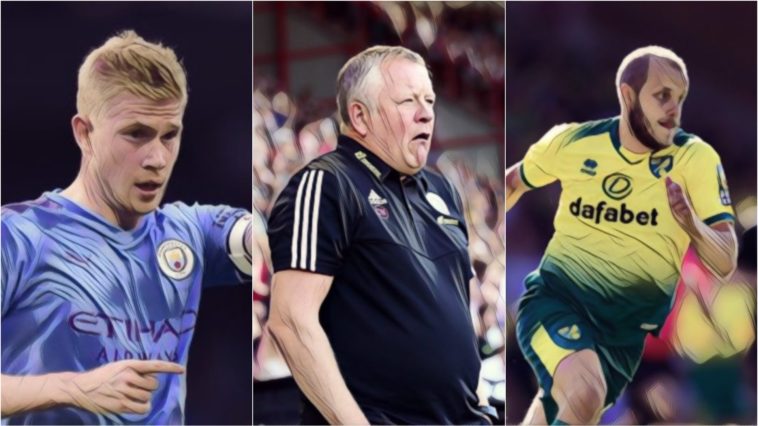 The fans may have chosen Teemu Pukki, but there was one player who shone above everyone else in the month of August and that’s Manchester City’s eight who wears number 17.

After four games Kevin De Bruyne leads the league in assists (5), key passes (16) and expected assists (2.37 xA). He has assisted at least one goal per game thus far, and scored against Brighton at the weekend.

The Belgian has been at the centre of everything the reigning Premier League champions do going forward in the first few weeks, and even reached a significant milestone by assisting 50 league goals faster than anyone else.

50 – Kevin De Bruyne has now made 50 assists in the Premier League, achieving this milestone in the fewest appearances of any player in the competition's history (123). Exquisite. pic.twitter.com/HMM5p2Q251

It’s mind boggling to think De Bruyne played such a minor role last season, contributing just two assists across a campaign wrecked by injury, while City went on to retain their title in almost unbeatable fashion. If he was on any other team, his absence would be devastating.

Goal of the Month – Teemu Pukki vs Newcastle

The Finnish forward found the net five times in his first three games for Norwich City, equalling a record set by Fulham’s Pavel Pogrebnyak in 2012 as the quickest player to reach five goals in Premier League history.

But it was his goal against Newcastle United that really caught the eye.

Teemu Pukki’s goal against Newcastle to make it 1-0.

Couldn’t have hit it better to be honest… ? #ncfc pic.twitter.com/y5odmQzQ6J

Manager of the Month – Chris Wilder

There were a lot of doubts coming into this season about Sheffield United, not least from ourselves who predicted they would finish bottom of the pile come May. But the Blades have had to put up with a lot of ignorance as well, as so many just assumed they were a simple team with an old school manager.

That couldn’t be further from the truth with regards to Chris Wilder, who might one of the most forward-thinking coaches in English football. He has been able to adapt his unique tactic of overlapping centre-backs to the top flight with greater ease than anyone expected. At times defenders are attacking while forwards are covering back defensively in what sounds like it should be an absolute mess, but it’s all carefully choreographed on the training pitch.

United are now sitting in tenth place with five points from four games, having rescued a point against Chelsea at Stamford Bridge from two goals down in the first half. Far from being bottom of the crowd, they might be the best placed of the promoted sides come May.

Wilder: We’re not in the Premier League to be daytrippers

Pass of the Month – Trent Alexander-Arnold vs Norwich

You could watch this assist from the Liverpool right-back all day. He hit a sublime ball down the throat of Norwich City’s defence where it met Divock Origi’s perfectly timed run to put Liverpool 3-0 up. An outrageously satisfying goal to watch on repeat.

Why are clubs choosing youth over experience for managerial roles?

Miss of the Month – Moussa Sissoko vs Aston Villa

Somehow, some way, Tottenham Hotspur always seem to give the ball to Moussa Sissoko in ideal positions to shoot. And he always, always misses. But they will keep giving it to him regardless. No wonder they’re struggling to put the ball in the net.

Theo Walcott’s dreadful miss for Everton vs Wolves was a very close second.

The Manchester United goalkeeper wasn’t set properly for Patrick van Aanholt’s shot against Crystal Palace at Old Trafford, which let the ball slip underneath his body and into the goal for a late winner.

It was an eminently saveable effort that the Spaniard let slip by him, not the first time in 2019 he has failed to make a seemingly routine save. It makes a huge change from the beginning of the year, when he equalled the record for most saves with the foot (four) in a single Premier League game against Spurs in January, a game the Red Devils won 2-1.

At the time United fans were calling on the club to give De Gea whatever he wanted in negotiations over a new contract. Some of them probably feel very different now.

Quote of the Month – Pep Guardiola

With every passing day Pep Guardiola sounds more and more like a Proper Football Man.

Stat of the Month – Jack Grealish

The Aston Villa man finally stopped that 19-game losing streak with a win over Everton.

Jack Grealish has won one Premier League game in a row

Donkey of the Month – Racists

I’ve used our weekly awards column on two occasions already this season to highlight this issue, so it feels apt to bring it up here again.

There should be no more hand-wringing over this issue, no more excuses, and no more meaningless gestures. The football authorities need to take strong action and they need to do it now.

Join our Fantasy Premier League by using this code: m7yqqi