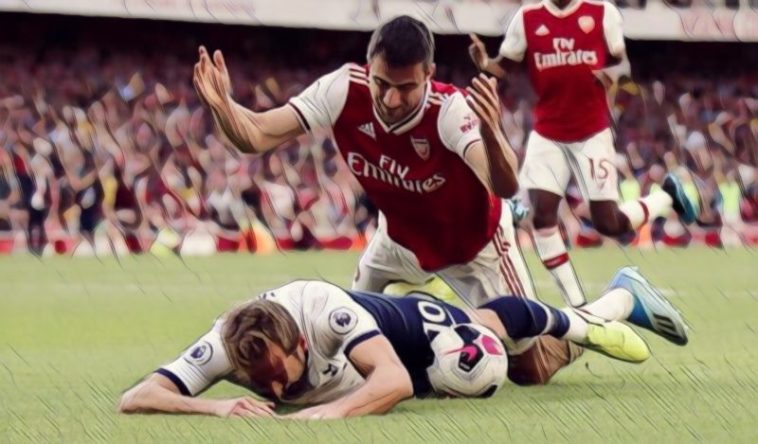 In a game of high drama, Arsenal and Tottenham each earned a point in their 2-2 draw in the North London derby.

Both sides showed their quality in waves, but generally displayed that both will be part of the chasing pack as Liverpool and Manchester City compete for the Premier League title.

Arsenal set up in a 4-3-3 with Sead Kolasinac back in the side at left-back and an exciting front three of Pierre Emerick Aubameyang, Alexandre Lacazette, and Nicolas Pepe. Unai Emery opted for an industrious midfield of Matteo Guendouzi, Lucas Torreira, and Granit Xhaka.

Tottenham lined up in their standard 4-2-3-1 with Davinson Sanchez a surprise option at right back, who was chosen ahead of the inexperienced Kyle Walker-Peters and the error prone Serge Aurier. Christian Eriksen, Erik Lamela, and Heung Min Son played as the attacking midfield trio behind Harry Kane and ahead of Moussa Sissoko and Harry Winks in midfield.

Tottenham were the better side in the first half, ruthlessly counter attacking the hosts at every opportunity. Much of this had to do with Arsenal’s midfield setup. Xhaka played as the central pivot with Guendouzi and Torreira on either side, yet the Swiss lacked the positional discipline to remain as a shield for the back four. This left a sizable gap in the middle of the Gunners midfield, making them vulnerable on the counter attack. Their midfield problems were further compounded by the aggressive nature of the front three, who pushed up to press and try and force Tottenham turnovers and left vast space for the midfield to cover as a result. When faced with the impeccable movement of the Spurs attacking line, particularly that of Son, Arsenal found it difficult to quell their bitter rivals threat on the counter.

Yet a two-goal lead for Spurs was a somewhat misleading representation of both team’s performances. Spurs constructed their goals from Arsenal mistakes, and as the game wore on the hosts grew in confidence. This again was aided by a combination of intelligent attacking play and sub par midfield support for the defense.

Harry Winks and Moussa Sissoko lack the defensive acumen to adequately shield a back four, despite their high work rate and ability to launch counter attacks. This allowed Arsenal to find space in between the lines and construct attacks with their fluid attacking three, but caused more problems in the second half when Dani Ceballos entered the game.

The Spaniard was able to push up as the most advanced player in the midfield three, playing penetrative passes towards the front three and allowing Arsenal to control possession more effectively. Spurs, wary of the pace of the Arsenal attack, kept dropping back into a narrow defensive shape, leaving space out wide and ahead of the Tottenham box for the Arsenal midfielders, mainly Guendouzi and Ceballos, to create chances from more central areas.

This was best seen for the second Arsenal goal, in which Guendouzi maneuvered past Spurs’ midfield with ease and lifted a lovely ball into the path of an onrushing Aubameyang. Yet despite the Arsenal onslaught, Tottenham were able to withstand most of Arsenal’s attacks and with the introduction of Giovani Lo Celso, began to slow the tempo of the game and control proceedings more. Such control and composure was critical for Tottenham, for it seemed that for much of the second half Arsenal was the only team that could have come away with the win.

For Arsenal, Emery made odd decisions in his selection and in game changes. His midfield three left such little defensive cover while also lacking a creative, dynamic presence in the final third. This was alleviated when Ceballos was brought on, but why he wasn’t chosen from the start is perplexing. Bringing on the want away Henrikh Mhikitaryan instead of the likes of Mesut Ozil, Reiss Nelson, and Edward Nketiah also raises questions about the managers in game tactical changes.

Arsenal’s defense has shown little signs of improvement, yet one cannot necessarily blame Emery when several of his defensive options are injured. Yet his decision making may come under scrutiny should he continue to make strange and potentially damaging choices.

Pochettino’s post match comments regarding his happiness about the end of the transfer window are telling, indicating that the continuity and harmony that existed within a largely unchanged Spurs squad has been broken this summer. With various new arrivals and the likes of Christian Eriksen, Toby Alderweireld, and Danny Rose not securing highly rumoured moves elsewhere, it’s easy to see why the team’s morale may be tenuous.

Consider that Pochettino is not a manager used to dealing with big egos and divided dressing rooms, and Tottenham’s problems could extend beyond this game. The Argentine boss will certainly hope that he can restore a positive dressing room vibe after the conclusion of the transfer window and begin to reshape his side.

It was an open game, exciting to watch and indicative of the respective quality of both teams. Their strengths were apparent and their weaknesses equally so, leaving fans assured that despite various new signings, neither North London club would be seriously contending for a Premier League title this season.