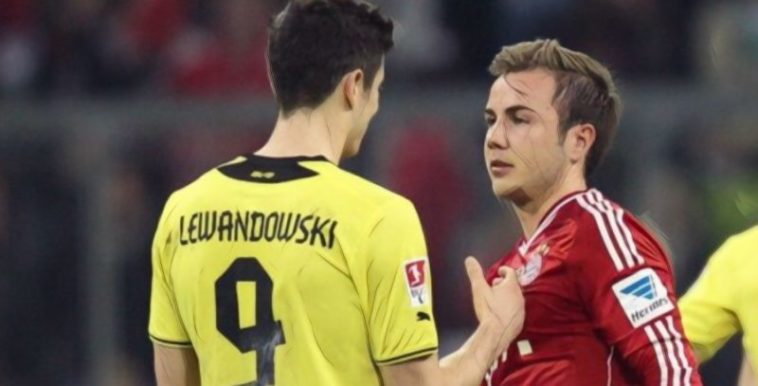 The name of Thiago Alcantara continues to be linked with a potential summer move to the Premier League, the midfielder reportedly keen on a new challenge after seven seasons in the Bundesliga at Bayern Munich, with Liverpool strongly mooted as his next destination.

Thiago has enjoyed a stellar career at the likes of Barcelona and Bayern and has won an abundance of major honours, playing alongside some of the world’s finest talents and under the tutelage of coaches such as Pep Guardiola, Carlo Ancelotti and Jupp Heynckes.

Should the 29-year-old head to Anfield this summer he will join an exclusive list of players to have been coached by both Pep Guardiola and Jurgen Klopp – the Manchester City and Liverpool managers regarded as arguably the two best coaches in world football at present.

Ahead of a potential move to Merseyside for Thiago, we’ve decided to look back and assess the players to have played under both Guardiola and Klopp:

Mario Gotze’s career has not quite hit the heights once expected following his rapid rise as a teenage sensation, the midfielder seemingly at a crossroads following the announcement he will be leaving Borussia Dortmund for a second time this summer.

Gotze was hailed as a generational talent following his initial emergence in the colours of Dortmund, a wonderfully gifted playmaker who thrived as a creative figure in an infectious side under the guidance of Klopp.

He starred as Dortmund won back-to-back Bundesliga titles and reached a Champions League final, before the familiar lure of Bayern Munich proved too strong and he headed to the Allianz Arena to link up with the Bavarians and Pep Guardiola.

Despite three successive league titles and an impressive tally of 36 goals over three seasons, the move failed to take the midfielder’s game to a new level, struggling to establish himself as an undisputed first choice and seeing his progress hindered by several injury problems.

He returned to Dortmund in 2016 and saw his career stagnate further following a metabolic disorder, a player once regarded as one of the most promising in world football having so far failed to reach his true potential despite much success.

Gotze will forever be remembered for scoring the goal that secured World Cup glory for Germany in 2014, but the 28-year-old will feel he has more chapters to write and will hope his next career move can propel him back into the consciousness of football fans.

Five of the best teenage talents in Premier League history

There are few forwards more feared in European football than Robert Lewandowski, arguably the best traditional number nine in the game and a player who has scored with outstanding regularity during a lengthy career in Germany’s top flight.

Lewandowski’s talents were spotted by Jurgen Klopp following a prolific return in his native Poland with Lech Poznan, signing the young forward for a fee of just €4.5m – an investment that soon proved one of the club’s greatest bargains.

The Polish poacher helped Dortmund to Bundesliga success during his debut season, before bursting into the life the following campaign with a 30-goal haul as Klopp’s side defended their title in style.

He hit 103 goals in just 187 appearances for the club – including a memorable four-goal destruction of Real Madrid in the Champions League semi-finals – before travelling a well-trodden path and signing for rivals Bayern Munich on a free transfer in the summer of 2014.

Lewandowski has taken his game to even greater levels during six seasons with the Bavarian giants, winning six successive Bundesliga titles – three of which came under Guardiola – and finishing as the division’s leading scorer four times to add to his one leading scorer accolade won at Dortmund.

Currently the third-highest goalscorer in the history of the Bundesliga, the 31-year-old is the current favourite to win the 2020 Ballon d’Or after a season that has delivered 51 goals in all competitions to date.

Jurgen Klopp spotted the potential in a young Ilkay Gundogan shortly after the first of his two title successes with Dortmund, signing the midfielder from FC Nürnberg to add a touch of class to a talented midfield.

Gundogan slotted in seamlessly as the deepest-lying of Klopp’s midfield options, his intelligent positional awareness and fine passing range making him the perfect creative presence from deep.

He helped the club secure a domestic double during his debut season at the Westfalenstadion before helping Dortmund to the Champions League final the following year – scoring from the penalty spot in the Wembley defeat to Bayern Munich.

Gundogan’s talents saw Manchester City and Pep Guardiola come calling during the summer of 2016, the Germany international amongst the Spaniard’s first signings after moving to the Etihad from Bavaria.

In four seasons the midfielder has won six major honours, including back-to-back Premier League titles and forming part of the side which completed English football’s first ever domestic treble.

A firm favourite of Guardiola for his ability to demand possession and keep the tempo of the game moving, Gundogan is a key member of a City side regarded as one of the finest of the Premier League era.

A player with an abundance of natural talent but perhaps one who has failed to make his mark at some of Europe’s leading clubs, Shaqiri’s status as a star turn at Swiss side Basel earned the winger a move to Germany and Bayern Munich.

He spent two-and-a-half seasons in Bavaria and won two Bundesliga titles and the Champions League amongst his honours, scoring six league goals during the second title-winning campaign in what was Guardiola’s first season in charge of Bayern.

Unable to secure regular first-team football amid the presence of Arjen Robben and Franck Ribery, Shaqiri moved on to Inter Milan and later – somewhat surprisingly – Stoke City, where he spent three seasons in the Premier League and established himself as the Potters’ chief creative threat.

Stoke’s relegation from the Premier League saw Jurgen Klopp move quickly to trigger the winger’s relegation release clause, Shaqiri signing for Liverpool in the summer of 2018.

He scored six league goals during his debut season – including a memorable double against Manchester United – but has often found himself on the periphery of the first-team, unable to secure regular minutes amid competition from the Reds fabled front three of Sadio Mane, Roberto Firmino and Mohamed Salah.

A dependable squad player under both Klopp and Guardiola, Shaqiri may have to move on once more if he is to command an automatic place.