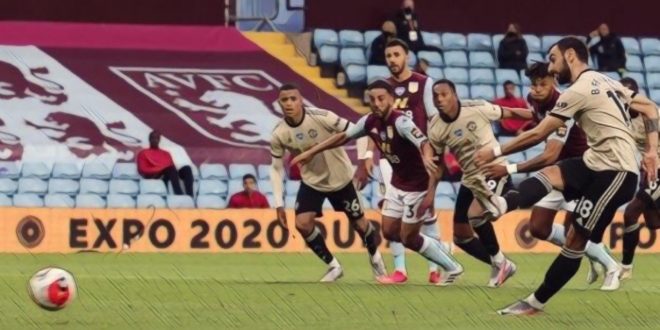 Man United on the spot again

Before the season began, this writer surmised that Manchester United would need to get over their reliance on scoring goals from penalties. Last season they scored nine from 12 spot kicks, and they couldn’t possibly depend on receiving the same amount this time around. Reader, how wrong I was.

United were awarded their 13th penalty of the season on Thursday night against Aston Villa, which Bruno Fernandes converted to give them the lead. Not only is that the most of any team this campaign, no team has ever won more in a single season in the Premier League.

The Red Devils are now equal at the top of the list alongside Crystal Palace’s 2004/05 side, who were relegated, and Leicester City’s title-winning team of 2015/16. Both of those teams had a better conversion rate though, scoring 11 and 10 penalties respectively.

With four games left in the season, don’t bet against United breaking that record.

Five teams with the most penalties in the Premier League in 2019/20:

16.5% – Manchester United have been awarded 13 of the 79 penalties taken in this season's Premier League (16.5%) – the highest proportion of any side in a season in the competition's history. Gain. pic.twitter.com/uvuGzKjgoD

While we’re on the subject of Man United, Mason Greenwood continues to score goals at a rate of knots. The teenager scored his ninth league goal of the season against Villa (his 16th in all competitions), meaning he has surpassed Marcus Rashford for the most goals in the Premier League by a United player before turning 19. He’s also the top scoring under-19 footballer in Europe’s top five leagues, three ahead of Barcelona’s Ansu Fati.

Four of Greenwood’s goals in the league have come from outside of the box, with no player scoring more from range than the youngster (not even Ruben Neves!). Earlier this week I wrote that such form would be unsustainable, but then again like the penalties I could be wrong on that note.

… are the only guarantees in life. Well, kind of. It had actually been a while since Manchester  City had last demolished Newcastle United, with the Magpies managing not to lose against Pep Guardiola’s charges in 2019. Their win last January was only the second time out of 19 meetings in the past decade that they managed to beat City.

Riyad Mahrez scored the second of the night, bringing his tally for the season to ten goals. That makes Man City the first team in Premier League history to have five players reach double digits in a single campaign.

Meanwhile, Kevin De Bruyne nabbed his 18th assist of the season, bringing him two closer to the record set by Arsenal’s Thierry Henry in 2002/03.

Christian Pulisic scored with a vicious strike on Tuesday evening to put Chelsea two goals up against Crystal Palace, helping the team to a 3-2 victory in the end.

Not only was it a superb finish that squeaked by Vicente Guaita at the near post, but it was his eighth goal of the season. That is double his previous highest single season tally of four, which he achieved twice while at Borussia Dortmund.

The most impressive thing about this is the fact that he has been able to do it despite missing two and a half months of the season through injury and there’s still four games of the season left.