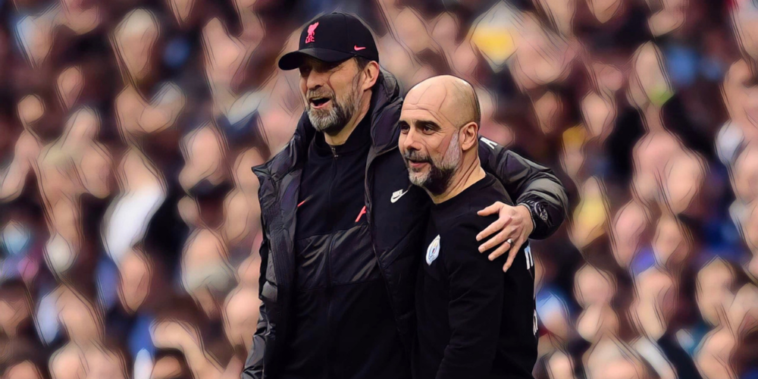 The Premier League season reaches its conclusion this weekend and there is still plenty left to settle at both ends of the division.

Ahead of the final fixtures of the 2021/22 season we look at the Premier League permutations.

For the ninth time the Premier League title race will head into the season’s final day, with Manchester City leading Liverpool by just a single point.

It will be the fourth time City have gone into a final day needing to win to secure the title and on each previous occasion the club have ended the season as champions.

On two of those occasions – 2013/14 and 2018/19 – it was Liverpool who were the challengers and the Reds will be hoping for a favour from former captain Steven Gerrard and Aston Villa at the Etihad.

City will be Champions with a win, while their superior goal difference (+72 compared to +66) means that if they drop points, Liverpool would still need to win their game against Wolves if they are to claim the title.

Any dropped points by Jurgen Klopp’s side on the final day will see the title remain in Manchester regardless.

Tottenham are in pole position to secure a top four finish and Champions League qualification, with a strong end to the season having seen Antonio Conte’s side leapfrog North London rivals Arsenal.

Arsenal’s 2-0 defeat at Newcastle on Monday leaves the Gunners two points behind Spurs ahead of the final fixtures. Mikel Arteta’s side host Everton – who secured their Premier League survival on Thursday – and know only a win will be enough to overhaul Spurs.

Spurs are in a strong position, however, and a superior goal difference (+24 compared to +9) means even a draw at relegated Norwich should be enough to secure their place in the Champions League next season.

West Ham missed the chance to move ahead of the Red Devils after squandering a two-goal lead to draw with Manchester City last weekend and are two points behind heading into the final day.

David Moyes’ team will finish in the top six if they win at Brighton and United fail to beat Crystal Palace, with the Red Devils needing to win to be sure of their place in the top six due to their inferior goal difference.

Whichever team finishes seventh will enter the Europa Conference League next season. Wolves, in eighth, can not catch either side.

Everton’s thrilling comeback win against Crystal Palace has secured their Premier League status, with the Toffees coming from two goals down to remove themselves from the relegation picture.

Either Burnley or Leeds will join Watford and Norwich in the Championship next season and both teams are level on 35 points ahead of the final fixtures.

Until the last one. We keep fighting. @LUFC pic.twitter.com/NU1NTZNoyz

The advantage is with Burnley who have a far superior goal difference (-18 compared to -38) and have a final fixture at home, taking on Newcastle at Turf Moor.

Leeds, who need to better Burnley’s result to survive, travel to Brentford.

Mohamed Salah leads the charts as he has done for much of the Premier League season, but the electric form of Son Heung-Min has blown the Golden Boot race wide-open ahead of the final day.

Son has scored 10 goals in his last nine appearances for Spurs, moving to 21 league goals for the campaign and just one behind Salah.

The latter missed Liverpool’s win at Southampton in midweek and could miss out against Wolves, with the Egyptian likely hoping to recover from injury in time to keep himself ahead of Son and win a third Golden Boot accolade.

Son could become the first Asian player to win the Premier League’s Golden Boot, whilst he would also join an exclusive list of players to have done so without scoring a single penalty.

Salah is also in contention to win the Premier League’s Playmaker Award, leading the league with 13 assists heading into the final day.

His main competition will come from Liverpool teammate Trent Alexander-Arnold, who sits on 12 goals created during the 2021/22 campaign.

Who will win this season's @Castrol Playmaker award? 🎨 pic.twitter.com/0XNEdZbsi1

The right-back is bidding to become the first defender to lead the Premier League for assists in a season, with the likes of Jarrod Bowen, Mason Mount and Andy Robertson (all 10) perhaps too far back to challenge for the accolade.

Manchester City and Liverpool will compete for the Premier League title, whilst there’s also individual recognition on the line for their goalkeepers.

Ederson and Alisson are level on 20 clean sheets in the race for the Golden Glove, with the former looking to win the accolade for a third consecutive campaign.

It's going down to the wire in the @Castrol Golden Glove race 🧤 pic.twitter.com/8IbjAkMPIh

Alisson won the award in 2018/19 and will hope to move level with Ederson on two career prizes, where he would join his compatriot, Petr Cech, Joe Hart and Pepe Reina as a multiple winner of the league’s Golden Glove.