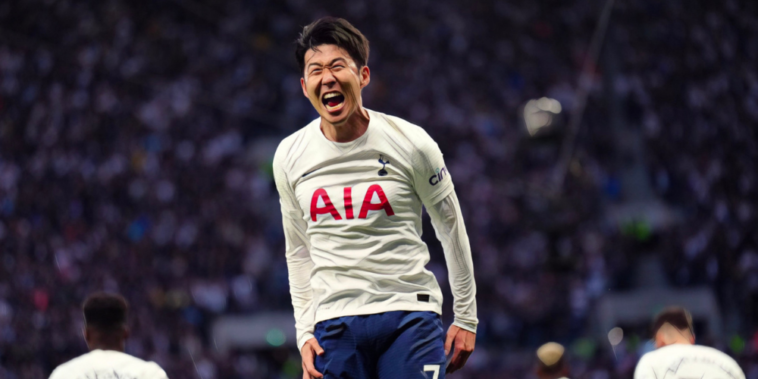 It’s been a productive season for many of the Premier League’s big names and as the season reaches its conclusion we look at the most prolific goal creators and takers in the division.

Here are the five players with most Premier League goals and assists per 90 minutes in 2021/22.

Son Heung-Min has enjoyed another excellent season at Tottenham and was named as the North London side’s Player of the Season last week.

The South Korean has scored a career-best 21 league goals this season and is just one goal behind Mohamed Salah in the race for the Premier League’s Golden Boot, ahead of the season’s final day.

Son’s goals are set to see him finish as Spurs’ leading scorer this season, the first player other than Harry Kane to do so since Emmanuel Adebayor in 2013/14.

Son’s haul is more remarkable given each of his goals have come from open-play, whilst 12 (57%) have come from his ‘weaker’ left foot with only Salah having scored more left-footed goals in the Premier League this season.

The 29-year-old also has seven league assists and has averaged 0.86 goals and assists per 90 minutes.

Leicester have endured a difficult season his term, with key absences having hindered their hopes of pushing for European football once again.

Jamie Vardy’s spells on the sidelines have been particularly damaging for Brendan Rodgers’ side, with the veteran forward remaining as lethal as ever when opportunities present themselves.

The 35-year-old has scored 14 goals from just 18 league starts this season and boasts the best goal-per-minute ratio in the Premier League this season.

A decade of sheer greatness from @vardy7 🔥 pic.twitter.com/G7dLU3UgY7

The Foxes forward has returned to the side with back-to-back braces against Norwich and Watford in recent weeks, whilst he will be targeting a 15th goal of the campaign when Leicester conclude their season at home to Southampton this weekend.

Should he find the net, he will have reached 15+ goals in five straight Premier League seasons.

Kevin De Bruyne has moved into contention for a third consecutive PFA Player of the Year award, following a sparkling end-of-season run of form to put Manchester City within touching distance of the title.

The Belgium international has enjoyed the best goalscoring campaign of his career in 2021/22, netting 15 league goals including a stunning four-goal performance at Wolves earlier this month.

De Bruyne became just the third midfielder in Premier League history to score four goals in a game, whilst his hat-trick inside 24 minutes was the division’s third-earliest treble.

The 30-year-old has also added seven assists this season and his record of 22 goal involvements from 24 league starts has seen the midfielder post an average of 0.94 goals and assists per 90 minutes.

Riyad Mahrez is another name who has enjoyed the most productive campaign of his career, scoring 24 goals in all competitions for Manchester City.

The club’s leading scorer has seen his Premier League action restricted, however, making just 14 league starts for Pep Guardiola’s side.

Those appearances have delivered 11 goals and five assists for the Algerian however, who has averaged a goal or assist per 90 minutes during the 2021/22 campaign.

City boast an enviable wealth of attacking options, but Mahrez leads the way in terms of productivity per 90 this season.

Mohamed Salah leads the Premier League rankings this season, with the Liverpool forward currently top of the charts for both goals and assists.

The Egyptian international has provided 35 goal involvements in 30 league starts this season, averaging 1.15 goals and assists per 90 minutes.

Salah’s output has slowed since an electric start to the campaign, but the 29-year-old remains one goal clear of Son Heung-Min in the race for the Premier League’s Golden Boot as we head into the season’s final weekend.

Mohamed Salah thinks he's the best in the world 👀 pic.twitter.com/7F8RC2gOrn

Salah also leads teammate Trent Alexander-Arnold in the Playmaker Award charts and could become the fourth player – after Andy Cole, Jimmy Floyd Hasselbaink and Harry Kane – to top both metrics in the same season.

Finishing as the league’s leading scorer would also secure a third Golden Boot, a feat previously achieved by only Alan Shearer, Thierry Henry and Kane.