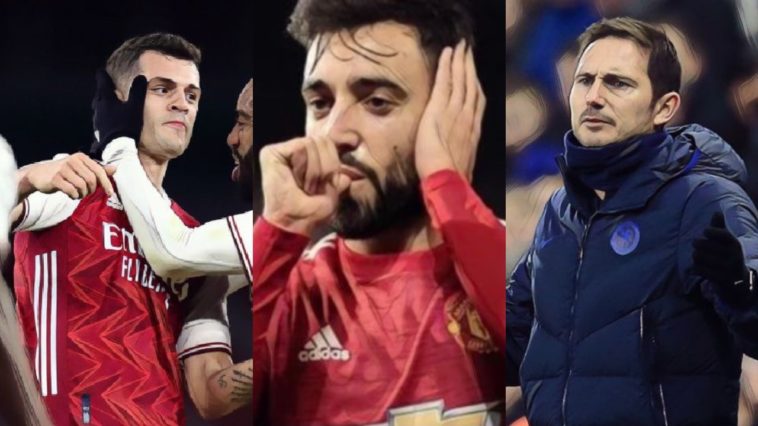 Our weekly Premier League awards, taking on a festive feel in gameweek 15, look at Bruno Fernandes putting in another fantastic shift, Granit Xhaka’s beautiful free-kick, Jack Grealish giving the eyes, and how Frank Lampard failed to take our advice.

Who else but Bruno Fernandes? The Portuguese virtuoso was yet again central to extending Manchester United‘s unbeaten away run, his goal and an assist making it six consecutive league matches on the road without defeat this season and 14 when including last season. Indeed, Man United have only lost two away games in 2020, to Arsenal and Liverpool back in January.

Fernandes has been central to that run since debuting in February, with performances such as these becoming an incredibly common occurrence. He became the first midfielder to reach ten goals in Europe’s big five leagues this season, bringing his total goal involvements for the calendar year to 31. That’s just over half of Man United’s total goals this year, 60!

That is what you call making an impact.

Arsenal‘s second goal of their 3-1 win over Chelsea was a peach, Granit Xhaka putting the ball top bins from a free-kick about 28 yards out. Must be nice to finally remember what scoring multiple goals feels like.

Jack Grealish didn’t play a hand in any of Aston Villa‘s three goals against Crystal Palace on Saturday evening, but he did provide the pass of the match that should have resulted in a goal.

With three defenders between the England international and Ollie Watkins, and another two in behind, he gives the eyes before executing a perfect slide rule pass to put the striker clean through on goal, but he could only hit the post. Skip to 1.40 in the below highlights video to watch it back.

The item at the top of each Premier League manager’s Xmas wish list: Arsenal to Leicester

Sometimes you’re a bounce of the ball away from winning a game. Che Adams is still wondering how he missed this chance in the 0-0 draw between Southampton and Fulham.

And a special mention to Sam Johnstone‘s superb late save to keep out Liverpool’s late attempt to win the game at Anfield, earning West Brom a point.

The item at the top of each Premier League manager’s Xmas wish list: Liverpool to Wolves

Robbie Savage: "We did the double over Scholesy's team once, I can't remember which year."

Paul Scholes: "We probably won the Double that year."

Three months ago this writer said that Frank Lampard needed to take more personal responsibility for his team’s fault after Chelsea conceded three goals in a game instead of passing the buck entirely to his players. Tell me, dear reader, does this sound like Lamps has taken that advice?

“It is not tactics or systems, it is do you want to run, back your teammate out and sprint? Or do you want to jog and say ‘maybe I don’t have to run’ and we took that decision instead of the right one.”

“If you go out and play at 60 to 70 per cent, or a few players who played at that level, you are not going to win any Premier League game.”

Conceding three goals to any team is bad, but conceding that many to this Arsenal team – who were scoring just 0.85 goals per game before Saturday’s meeting – is especially bad. Coupled with the fact that Chelsea have now lost three of their last four Premier League matches, killing dead talk of a title tilt, it makes for very worrying reading for the manager.

But then again, Frank can only be failed, not fail himself.

Tactical Analysis: Exactly what type of team are Lampard’s Chelsea?