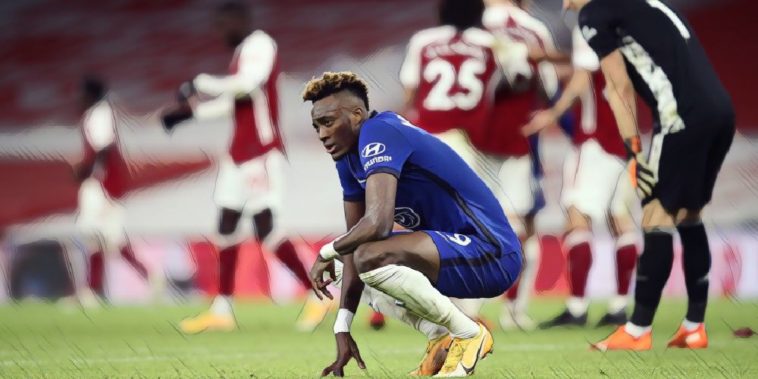 Chelsea missed the chance move up to second in the Premier League after their lacklustre performance saw them slip to 3-1 loss to struggling London rivals, Arsenal.

Both sides came into the game in somewhat disappointing form, Arsenal’s well-publicised recent record seeing them slide towards the relegation zone, while Chelsea had lost three of their last four Premier League games to fall away from the top of the table.

It was Arsenal that got off to the brighter start at the Emirates though, with Kieran Tierney looking a particular threat down the left, though the Gunners were unable to convert a number of early chances. However, they were handed the opportunity to take the lead after the returning Reece James was adjudged to have brought down Tierney. Alexandre Lacazette stepped up and duly sent Edouard Mendy the wrong way to give his side the lead on 35 minutes.

That lead was doubled nine minutes later, with much-maligned figure Granit Xhaka despatching an inch-perfect free-kick over the wall and beyond the Senegalese ‘keeper, after youngster Bukayo Saka was brought down just outside the box.

Chelsea made two changes at half-time in a bid to get back into the game, though their attacking output remained unchanged, and 10 minutes after the restart Arsenal extended their advantage. A move down the right saw the ball arrive at the feet of Saka, the England internationals effort – which looked suspiciously like a misplaced cross – looping over the head Mendy and into the back of the net.

Arsenal would spurn a number of quickfire chances to further extend their lead, the pick of which saw Mohamed Elneny crash an effort against the bar.

The Blues did however finally muster a late rally, Tammy Abraham bundling home from close range following a Callum Hudson-Odoi cross to cut the arrears, and they could have further reduced the deficit after being awarded a 90th minute penalty. However, Jorginho’s tame effort was well saved by Bernd Leno who really didn’t have too much to do throughout the game.

Despite spending £222m in the summer, Chelsea are four points worse off than they were after 15 Premier League games last season. pic.twitter.com/zcGQfPCHpr

Despite having more shots than Arsenal, Chelsea rarely looked like threatening, with only three of their 19 efforts being on target, and speaking afterwards, Frank Lampard admitted his side were distinctly below their best and said his players have to ‘take responsibility’.

“It wasn’t good enough,” Lampard told Sky Sports. “We fought in the second half but in the first half we gave ourselves too much to do. The players who came on added speed energy and intensity.

“I am angry because I want us to win games. It was an opportunity to go second. You get what you deserve.”

The result leaves Chelsea sixth in the Premier League, with Lampard’s side hosting fifth placed Aston Villa on Monday night.

Required Reading: Five of the best football books of 2020

See also – The item at the top of each Premier League managers Xmas wish list: Liverpool to Wolves