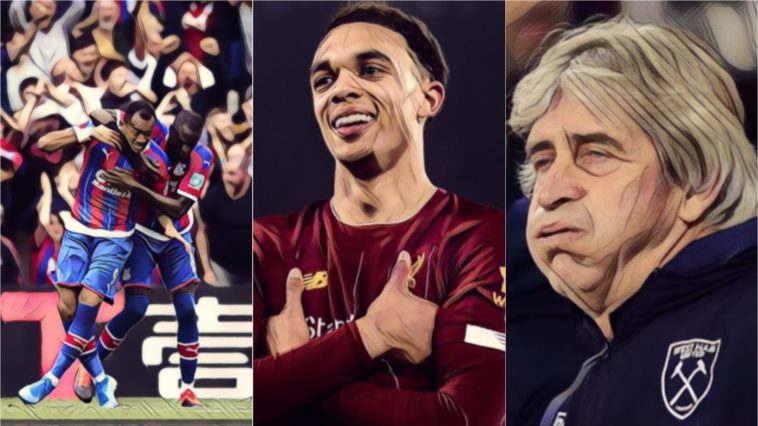 Ah, the festive period, when the football just does not stop coming. We’ve been treated to 20 matches in the space of four days during the final two gameweeks of the year and the decade. See you in 2020, everyone!

It’s always a special moment for any player to score their first Premier League goal, but Michael Obafemi‘s was something to behold. Still only a teenager, the speedster dribbled confidently at the Chelsea goal and sent his shot flying into the roof of the net, with Southampton going on to win 2-0. Scenes.

One clean sheet. One goal. Two assists. Three if you count the corner he took that lead to the penalty, but regardless, what a performance that was by Trent Alexander-Arnold in Liverpool‘s four goal battering of Leicester City.

The full-back’s delivery of the ball was as sumptuous and accurate as ever, while his finish for the final goal of the match, after sprinting half the pitch, was exceptional. He then put in another man of the match performance against Wolves, securing a second clean sheet in two days. Given how integral he is to the Reds’ gameplan, how long before he is included in the conversation for Player of the Year?

Two assists, a goal, a clean sheet and the Man of the Match award 💫

The best bits from a SUBLIME @trentaa98 performance at Leicester ✊🔴 pic.twitter.com/9OB8r0cJ7G

It’s also worth praising Adama Traore for his exceptional display against Manchester City, where he provided a goal and an assist in a stunning 3-2 come-from-behind victory for Wolves. He was rested for the Liverpool game, but when he came off the bench he was a huge threat on the ball. The Spanish winger is fast becoming one of the most unexpected stars of the season.

It was a pretty spectacular week for golazos this week, Dele Alli and Michael Obafemi’s goals against Brighton and Chelsea respectively worthy of a mention in particular. But the goal of the week has to go to Jordan Ayew.

Jordan 'Messi' Ayew with a late, late contender for goal of the decade. #CPFC pic.twitter.com/DihfIkgfdd

The Ghanaian striker danced his way through the West Ham United defence before deftly chipping the ball over goalkeeper Roberto to secure a 2-1 win for Crystal Palace.

When Tanguy Ndombele hasn’t been struggling with injury and been fit enough to get on the pitch, he’s shown a lot of promise that he could be an exceptional midfielder with Tottenham Hotspur for years to come. But his highlight of the week was a devilish rabona cross against Norwich City.

Was it successful? No, but when we are in the presence of a rabona then we must pay our respects.

Ben Foster made a brilliant save from a John Fleck shot to secure a vital 1-1 draw for Watford against Sheffield United. Fleck was only a few yards out and the finish seemed elementary, but he couldn’t beat the Englishman.

That was followed up with another magnificent save from a close range Wesley header in the 3-0 win over Aston Villa just two days later. The Brazilian striker was in a great position to score and his technique was ideal, heading the ball down into the ground to make it as hard as possible for the goalie, but Foster was somehow equal to it. At 36-years-old, he appears virtually ageless.

A hat-trick of goalkeeping errors all vie for this week’s award, beginning with Martin Dubravka‘s howler against Man United. Newcastle United have won far more points than anyone expected at this point, primarily because they try to make as few defensive mishaps as possible. Then their goalkeeper lets a very saveable Anthony Martial shot slip through his fingers and they end up losing 4-1.

That was almost as costly as Ederson‘s red card against Wolves on Friday. It may not have resulted directly in a goal, but the Man City goalkeeper, who took out an onrushing Diogo Jota in the 11th minute, put his side at a severe disadvantage against an in-form team. Wolves won the match 3-2.

Ederson is SENT OFF 🔴

Drama at Molineux as Man City are reduced to 🔟 men!

Meanwhile, Arsenal looked immeasurably better against Chelsea on Sunday than they have throughout the season; tactically they seemed to actually know what they were doing, their passing was crisp and accurate, and their midfield looked solid for the first time in the campaign.

Sadly, all that good work was undone by Bernd Leno‘s second-half mistake. The German goalie leaped into the air to catch Mason Mount’s cross, but all he got was air and Jorginho took advantage to equalise. The Blues ended up winning 2-1.

Adam Lallana has waited a LONG time for another assist.

This week we bestow this honour on West Ham United. The East London outfit sacked their manager Manuel Pellegrini this week, which, given their rotten run of form, is probably fair enough. But when you look back at the club’s overall decision-making process these past few years, then you see why they’re in their current predicament.

David Moyes was hired just over two years ago in a bid to survive relegation, which they did. The former Everton manager apparently wanted the club to improve their recruitment division, but they disagreed and he left in the summer of 2018. They subsequently hired Pellegrini and gave him all the spending power, putting him in charge of all transfers.

Mario Husillos, who previously worked with the Chilean at Malaga, was hired as Director of Football. Under the pair, the club spent £155m on transfers, breaking their record fee on two occasions. They bought some very talented players, but the squad was awfully imbalanced, especially once Lukasz Fabianski suffered a serious injury, and it was painfully obvious for a large tranche of this campaign.

Now that they have realised the error of their ways, the Hammers have rehired Moyes. The Scot did well during his previous spell, but really? With all that lovely Premier League money you’ve got, you make the least inspiring appointment possible? That might be harsh actually: Tony Pulis was the other candidate for the job.

It’s worth remembering that joint-chairmen David Sullivan and David Gold oversaw the financial deterioration of Birmingham City, leaving the former Premier League club in a heap when they sold it a decade ago. West Ham were meant to be entering a brave new world, which their new stadium and major investment in the squad would lead to, but instead, they are a complete mess.