Liverpool keep on keeping on

On top of their 35 game unbeaten run, Liverpool also set a new club record of 17 away games without defeat following their thumping 4-0 win over Leicester City at the King Power Stadium.

The Reds have now scored 501 goals in all competitions under Jurgen Klopp, which means they have been scoring at a rate of 2.09 goals per game with the German at the helm.

The last of those goals was scored by Trent Alexander-Arnold, who also provided two assists on Thursday night. The right-back is now on 21 assists in the Premier League in his career, which rises to 26 when you include all competitions. He is the top assist maker in the league since August 2018, with 20. That puts him ahead of the likes of Kevin De Bruyne, David Silva, Christian Eriksen and other top playmakers in the top flight.

The result, obviously, was a crushing blow to Leicester City, who had conceded just five goals at home before Thursday; they let in four in the space of 90 minutes. It was also the Foxes first home defeat in 11 games, but it’s the one that likely knocks them right out of the title picture.

Manchester United scored four goals in one game for the second time this season, beating Newcastle United 4-1 at Old Trafford on Boxing Day. It’s the third biggest win the club have enjoyed under Ole Gunnar Solskjaer, behind last year’s 5-1 trampling of Cardiff City and the 4-0 win over Chelsea on the opening day this season.

Manchester United have only scored more than 4 goals in one Premier League game since Sir Alex Ferguson retired. This is the seventh season since. (Cardiff 1-5 United, December 2018)

It’s been well documented that United have fielded the youngest team in the league this season, and that’s reflected in their goal scorers – Victor Lindelof is the oldest player in their squad to find the net in the top-flight, at the age of 25.

Mason Greenwood is one of the young upstarts to have impressed in front of goal this season: the 18-year-old striker has found the net eight times in nine starts this campaign. Jadon Sancho is the only teenager to have scored more in the top five leagues, scoring 12 goals for Borussia Dortmund.

A less positive trend is developing for United at the opposite end of the pitch, however. The Red Devils have now gone 14 league games without a clean sheet, the longest run in the club’s history. That is despite the fact they have improved their backline by investing heavily in the likes of Harry Maguire and Aaron Wan-Bissaka.

The year in football is almost over, with just one round of Premier League games still to go. Although we don’t measure the table in calendar years, it’s still interesting to see how it shakes up heading into the New Year. For instance, Sheffield United currently have the sixth best points per game rate in the division, despite only gaining promotion from the Championship last season.

It won’t surprise you to find out that Liverpool are top of the calendar table as well, with a whopping 95 points from 36 games played. No matter what happens this weekend, they will be the top team in 2019.

They are six points ahead of Manchester City, who have actually gained more points across this year than they did in 2018, despite having played a game less. The reigning champions have increased their points per game and have better attacking and defensive records than Liverpool, and yet find themselves lagging behind in both tables. 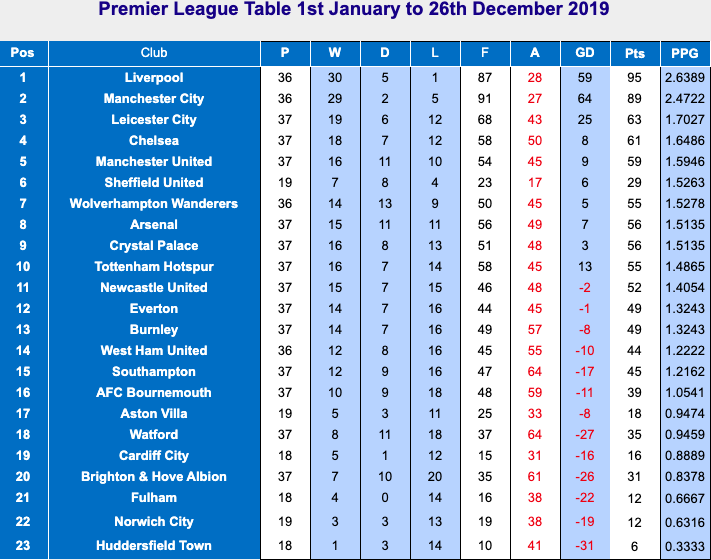 According to WhoScored, Everton have lost possession due to a bad first touch the most times per game in the Premier League this season, with 17.67. Now you know.