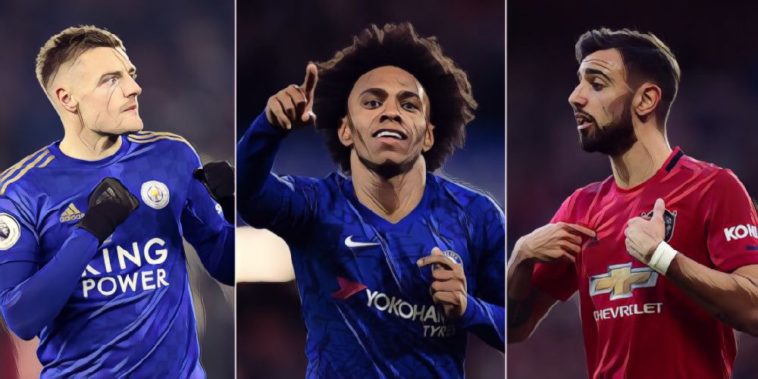 The Premier League makes its hugely anticipated return this week and whilst the spectacle of the division is set to look markedly different, the tension of the league’s run-in remains as exciting as ever.

Amongst the most intriguing aspects of the Premier League’s restart is the race to secure continental qualification, with as many as seven sides holding realistic ambitions of securing a top-four finish and entry into next season’s Champions League.

Runaway leaders Liverpool are certainties to secure Champions League football and second-placed Manchester City look a given to finish in the top four, though the pack of chasing sides will be closely following the verdict of the champion’s appeal against a two-season ban from Europe.

Should City’s sanctions for breaching Financial Fair Play regulations stand, the side finishing fifth is likely to be granted a place amongst Europe’s elite next season.

We’ve decided to look at each of the contender’s remaining fixtures and assess what is likely to be an enthralling race for Champions League football:

Arsenal’s indifferent season thus far leaves the north London side facing a difficult task to secure European football, though the Gunners have shown signs of improvement since the arrival of Mikel Arteta as manager in December.

The Spaniard’s appointment has helped galvanise a side which had looked apathetic and uninterested during the latter period of Unai Emery’s reign, with Arsenal having registered a nine-game unbeaten run in the Premier League since the turn of the New Year.

Whilst the enforced break in the season came at a time the club was picking up momentum, the time has allowed several players to return from injury with summer signing Kieran Tierney back to full fitness and Lucas Torreira stepping up his recovery from a fractured ankle which was set to rule the Uruguayan out for the remainder of the campaign.

Arteta seems to have the majority of the squad on board with his methods and will demand unity for what looks like a testing run-in, Arsenal facing four of the current top six alongside a North London derby at Tottenham.

They do play six of their remaining ten fixtures away from home, though will hope the behind-closed-doors resumption of the campaign can benefit a side which has won just twice away from the Emirates this season.

Arsenal can rise as high as sixth with a positive result in their first fixture back on Wednesday, but face a formidable task to beat a Manchester City side which has won the past six meetings between the teams.

Chelsea return to action this weekend with a hugely positive atmosphere surrounding the club at present, Frank Lampard’s side already looking to next season with the capture of Ajax playmaker Hakim Ziyech and the impending arrival of Timo Werner from RB Leipzig.

Those players will be heading to west London anticipating Champions League football next season, and Lampard’s youthful side are in a strong position following a promising season at Stamford Bridge.

Currently sitting fourth – three points ahead of fifth-placed Manchester United – they do however face a tricky looking set of fixtures. The second game after the restart sees them host Man City, while they also have a trip to Anfield to face champions-elect, Liverpool. They are also set to play fellow Champions League hopefuls Sheffield United and Wolves, as well as three of the sides who are scrapping for their lives down at the bottom.

The west London side’s squad will be boosted by the returns to fitness of N’Golo Kante, Christian Pulisic and leading scorer Tammy Abraham, whilst Ruben Loftus-Cheek could also play a role having missed the entirety of the campaign so far through injury.

Did the enforced suspension of the season come at the right time for Brendan Rodgers’ high-flying Foxes?

Leicester have enjoyed a superb season under the Northern Irishman’s management and continue to punch above their weight, currently sitting third in the Premier League and firmly on course to bring Champions League football to the King Power Stadium.

Rodgers’ side, however, had wobbled prior to the outbreak of the coronavirus pandemic, winning just two of their previous eight league fixtures to begin to look over their shoulders. The squad’s lack of depth had looked like it could prove costly, though hopes will now be high a re-energised side can finish the season strongly.

Jamie Vardy’s brace against Aston Villa in the club’s final pre-suspension fixture ended a run of seven league games without a goal for the 19-goal Golden Boot leader, and Leicester will hope the 33-year-old can rediscover his best form as they bid to make a shock return to Europe’s elite.

Leicester currently have an eight-point gap to fifth-placed Manchester United and winnable-looking fixtures against strugglers Watford and Brighton in their next two. Rodgers will hope to have continental qualification secured before a tricky run-in that sees the Foxes play four of their European-chasing rivals in their last five fixtures.

Another side who had seemingly found their best form prior to the suspension of the campaign, Ole Gunnar Solskjaer’s side registering an 11-game unbeaten run in all competitions including a derby victory over Manchester City.

That run had also seen United keep an impressive nine clean sheets and the signs are encouraging for Solskjaer and his youthful side – the Red Devils having played the youngest side, on average, in the Premier League so far this season.

Whilst the club’s momentum may have been checked by the outbreak of a global pandemic, the break has allowed several key figures – notably Marcus Rashford and Paul Pogba – to recover from injury ahead of a season-defining run-in.

Pogba has made just eight appearances in all competitions so far this season and much has been discussed about how the World Cup winner will fit alongside impressive mid-season signing Bruno Fernandes, whilst leading scorer Rashford was enjoying the best goalscoring form of his career before suffering a serious back injury in January.

Manchester United face just one of the current top six – Leicester away on the final day of the season – during their run-in, though much may depend on their opening results, Solskjaer’s side hosting seventh-placed Sheffield United after a difficult trip to face former manager Jose Mourinho and Tottenham on Friday night.

Sheffield United‘s dream return to the Premier League continues to go from strength to strength with the Blades firmly in the hunt for an unlikely and stunning European qualification.

The pre-season relegation favourites have made a mockery of that billing with Chris Wilder’s inventive system thriving at the highest level, the South Yorkshire side the best example of how collective strength and perfect planning can thrive in the Premier League.

The season’s suspension means that Wilder has a full strength squad to choose from ahead of their first fixture against Aston Villa on Wednesday, whilst the rest will undoubtedly have helped a squad that lacks depth and has enjoyed limited rotation this season.

Sheffield United do, however, face a series of difficult tests ahead of the run-in, including trips to face fellow European contenders Manchester United, Chelsea and Leicester, alongside home fixtures with both Tottenham and Wolves.

Wilder’s side also remain in the FA Cup and will be confident of progress ahead of a last eight meeting with Arsenal at Bramall Lane, the Blades refusing to be daunted by any occasion so far this season.

The club’s opposition in the run-in possess the highest average position of all the contenders featured, but only a fool would write off United continuing to upset the status quo.

Has any manager benefitted from the break in play more than Jose Mourinho?

The Tottenham manager was enduring a nightmare period prior to the suspension of football, his injury-hit side winless in six fixtures and crashing out of both the FA Cup and Champions League.

Much of the club’s struggles were due to a lack of a recognised forward, with both Harry Kane and Heung-Min Son expected to miss the remainder of the season before the outbreak of the coronavirus pandemic.

Spurs will return to action against Manchester United on Friday night with both players back to full fitness and available, whilst mid-season signing Steven Bergwijn is also set to return. That trio will add a level of potency that has been sorely missing from the club’s attack, as Mourinho seeks to bridge a seven-point gap to the top four.

That may seem a difficult proposition on paper, but with clashes against United and Sheffield United – two of the teams above the north London side in the table – they have an opportunity to make up early ground in the opening fixtures of the restart.

Wolves have a favourable run-in on paper with only Manchester United’s remaining opponents having a lower average position, Nuno Espirito Santo’s side strongly placed to secure European football for a second successive season.

The indefatigable Midlands outfit continue to produce consistent results despite a draining fixture list and limited squad depth, Wolves having begun their season in late-July after entering the early rounds of the Europa League.

The enforced break may benefit a side which is rarely altered by their Portuguese tactician, the club lacking a list of credible alternatives to several key players including leading scorer Raul Jimenez.

Last season’s success was hugely admired from those outside of Molineux, though a top four finish and Champions League qualification – in just the club’s second season since returning to the Premier League – would comfortably outshine the previous year’s achievements.