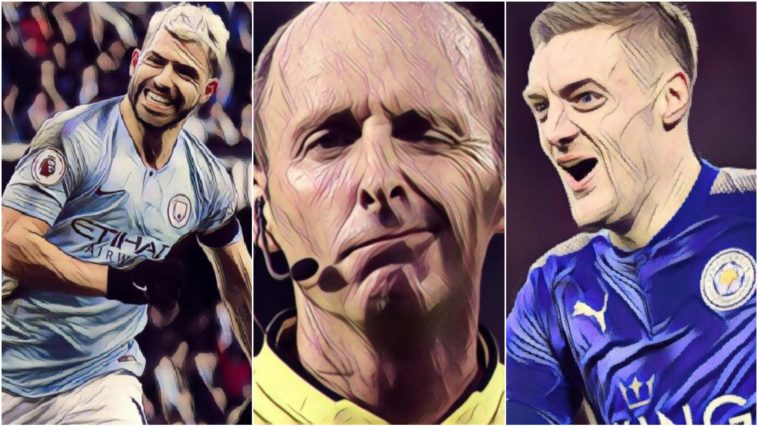 If you thought last week’s awards had copious amounts of Sergio Aguero, then you’re in for a surprise. But first…

Rather than taking joy in one’s success or being moved by something heartfelt as we like to do with this particular award, we chose to dabble in some Schadenfreude instead. After all, who couldn’t help but chuckle when Jamie Vardy missed a penalty against Spurs with his first touch of the game.

Jamie Vardy misses a penalty with his first touch of the game! ❌❌ pic.twitter.com/XFre3RfK3e

And a shoutout to this poor couple, who really did not countenance a resemblance to Klan members when they bought their ponchos in the club shop.

For the second week in a row Paul Pogba has put in a top performance only to be gazumped by the little Argentinian from across the Manchester divide.

Sergio Aguero‘s performance on Sunday, in which he scored half of the goals in a 6-0 demolition of Chelsea, wasn’t just praiseworthy in and of itself: it was an exemplification of his Man City career. His second hat-trick in the space of a week was also his fifteenth in all competitions for City and his eleventh in the Premier League, equalling Alan Shearer’s record. Greatness personified.

And while he was at it, Aguero also equalled the Man City record for most league goals, broke that record, and then beat his own record. All in a day’s work, and nothing short of what we’ve come to expect of the striker in the last eight years.

Just moments after missing an open goal from two yards out, Sergio Aguero went and did this.

The Argentine was not the only forward to score a cracking finish against a terrible team from South West London, so it would be remiss of me not to mention Anthony Martial‘s spectacular goal against Fulham. The Frenchman’s typically powerful dribble was one of the delights of the weekend.

Roberto Firmino laid on this nice little back heel assist for Mo Salah, bamboozling the Bournemouth defence for their third and final goal of the game.

Honourable mention for Moussa Sissoko’s assist for Heung-Min Son’s injury-time clincher during Spurs 3-1 win over Leicester City, taking out the entire field as the Foxes pushed for an equaliser.

The only blemish on Sergio Aguero‘s perfect day was this abominable miss from a couple of yards from the goal. Maybe he just likes working for his goals rather than being given tap ins.

Ross Barkley dismantled that theory though with this doozy of an assist.

As the statistics show, it was a really bad week for Chelsea.

This is Chelsea’s 1,070th game since they last conceded 6 goals in the league, which was in a 7-0 Division 1 defeat at Brian Clough’s Nottingham Forest in April 1991 pic.twitter.com/0pFYFtGLEV

By all rights Maurizio Sarri deserves the demerits this week for overseeing Chelsea’s implosion against Man City while playing the world’s best defensive midfielder out of position, but there is one manager misusing the talent at their disposal more than the Italian, and that’s his compatriot Claudio Ranieri.

The Fulham manager has the rather thankless task of keeping Fulham in the top division, but he seems intent on making it harder for himself. Not only has he continually excluded the team’s most talented players – Tom Cairney and Ryan Sessegnon – from the starting line-up, but he has also tried to completely flip the side’s style of play to no effect.

Under Slavisa Jokanovic the Cottagers were trying (and failing) to play a possession-based game, but since Ranieri took over he has gone with a very direct approach, something totally unsuited to one of the shortest and least physically imposing squads in the entire league.

During his reign only Huddersfield have won less than Fulham’s three victories in the same period. The Championship beckons.

We were all waiting for Mike Dean’s 100th red card, and although he didn’t come through, he still provided the entertainment.

Of course Dean did not stop acting the ham there, continuing the pound shop comedy routine after the full-time whistle.

Watch as Mike Dean hides the match ball from Manchester City's Sergio Aguero after his hat-trick against Chelsea: https://t.co/CSKe1UDN6v pic.twitter.com/8GoWfGcXB2