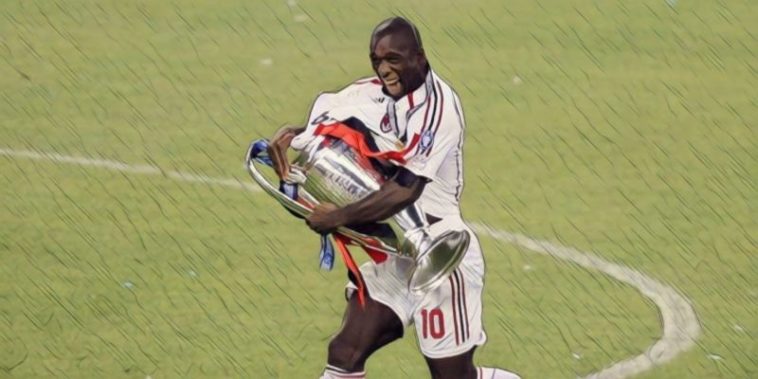 The Champions League remains the pinnacle of club football and the holy grail for Europe’s elite, with only football’s finest privileged enough to lift the game’s biggest honour.

The continental competition has further evolved into sporting behemoth since its rebranding in the early nineties, an annual battle between the world’s biggest and best.

Whilst several players have been fortunate to lift the trophy on more than one occasion, there is only a select few who have scaled Europe’s Everest with two different clubs in the modern era.

The first man to lift the trophy with two different clubs during the Champions League era, Desailly achieved the feat in back-to-back campaigns during the first two seasons of the rebranded competition.

Desailly formed part of the Marseille side that became France’s first – and so far only – European champions in 1993, the Frenchman playing the entire contest as AC Milan were beaten 1-0 in Munich courtesy of a goal from Basile Boli.

The Italian giants were clearly impressed by his talents, securing his signing that summer to strengthen a side that would reach three consecutive Champions League finals.

The second of those in 1994 delivered one of the most memorable final results of all-time, Milan thrashing pre-match favourites Barcelona 4-0 in Athens, Desailly scoring his side’s fourth to lift a second European crown.

One of the great defensive players of his generation and a World Cup winner in 1998, Desailly later spent six years in the Premier League with Chelsea.

Another member of Marseille’s historic Champions League winning side of 1993, Deschamps would later patrol the midfield of several clubs including a trophy-laden spell at Italian side Juventus.

During his time in Turin, Deschamps would help the club to three Serie A titles and three consecutive Champions League finals, the first of which saw the Old Lady emerge triumphant courtesy of a penalty shoot-out victory over holders Ajax in Rome.

After a short stint at Chelsea, he would reach another Champions League final at Valencia, though was an unused substitute during their defeat to Bayern Munich in 2001 – missing out on becoming the first player to win the trophy with three different clubs.

His leadership skills saw him move into management where he lost again in the Champions League final with Monaco in 2004, later becoming just the third man in history to win the World Cup as both a player and manager with France in 2018.

No player in history has ever had a longer gap between two Champions League successes than Edwin van der Sar, the former Netherlands international winning the trophy or the first time with Ajax in 1995 before again lifting the trophy as a Manchester United player 13 years later.

The goalkeeper reached successive finals with the Amsterdam side during the mid-nineties, winning the first of those two showpieces courtesy of a late goal from teenager Patrick Kluivert – the forward becoming the youngest ever Champions League final goalscorer in the process.

Van der Sar would later play three finals in four seasons during a memorable spell at Manchester United, emerging victorious from the first ever all-English final against Chelsea in Moscow, saving the decisive penalty from Nicolas Anelka during the club’s 2008 shoot-out success.

A four-time winner of the trophy and the only player in history to have won the Champions League with three different clubs, Clarence Seedorf is footballing royalty when it comes to club football’s biggest stage.

Part of an exciting young Ajax side that conquered Europe in 1995 alongside the aforementioned Van der Sar, Seedorf would lift the trophy once more in the colours of Real Madrid three years later.

The former Netherlands international would enjoy the most successful period of his career having crossed the Milan divide from Inter to AC, however, forming part of Carlo Ancelotti’s all-conquering Rossoneri outfit that reached three finals in five seasons.

Seedorf would win two of those finals, beating Juventus on penalties at Old Trafford in 2003, before defeating English opposition in Liverpool courtesy of two Filippo Inzaghi goals in Athens in 2007.

One of just four players to win back-to-back Champions Leagues with different clubs, Sousa was an understated presence in a Juventus side which was crowned champions of Europe in 1996.

The former Portugal international formed part of a tenacious midfield alongside the likes of Didier Deschamps and Antonio Conte, forming part of the side which defeated reigning champions Ajax on penalties in Rome, though he was substituted shortly before the hour.

He headed to Bundesliga champions Borussia Dortmund that summer and helped the German side to a maiden Champions League title, playing the entirety of the contest as former side Juventus were memorably beaten 3-1 at the Olympiastadion in Munich.

The inspiration behind Porto’s shock triumph in 2004, Deco was the midfield maestro behind Jose Mourinho’s exciting side, scoring in the club’s final success over Monaco in Gelsenkirchen.

The Brazilian-born Portuguese international joined an exodus of the club’s finest talent that summer, joining Spanish giants Barcelona before later being named as the runner-up to Andriy Shevchenko in the Ballon d’Or.

Joining forces alongside Ronaldinho in a mouthwatering creative line up, Deco helped inspire the Catalan side to just the second European triumph in their history in 2006, a come-from-behind victory over 10-man Arsenal in Paris.

One of the classiest midfield operators the game has witnessed, Alonso would twice reach European football’s pinnacle during spells at some of the continent’s leading clubs.

His first Champions League success came during Liverpool‘s incredible fightback against AC Milan in Istanbul in 2005, Rafael Benitez’s side coming from three goals down at half-time to win on penalties, Alonso scoring the equaliser on a dramatic evening in the Turkish capital.

Having been tempted to return to his homeland with Real Madrid, Alonso lifted the trophy once more in the famous all-white colours, playing a crucial role in the club’s run to La Decima despite being suspended for the extra-time final victory over cross-city rivals Atletico Madrid.

The Cameroonian forward scored goals prolifically in the Champions League throughout an illustrious career at the very highest level, including twice netting in separate finals to help secure victories for Barcelona in 2006 and 2009.

The second of those Champions League successes would come as part of a continental treble, a feat Eto’o would repeat the following season after signing for Inter Milan – Jose Mourinho’s side the first Italian outfit to secure the treble.

Eto’o’s back-to-back successes also made him the first – and so far only – player to achieve successive continental trebles with two different clubs, the record four-time African Player of the Year one of the finest players the continent has produced.

He scored 30 Champions League goals in just 78 appearances, level with the likes of Wayne Rooney and Kaka.

It would be a return to Catalonia that saw Pique develop into one of the world’s best central defenders, however, thriving under Pep Guardiola to twice beat his former side in Champions League finals, Barcelona defeating United in both 2009 and 2011.

One of the most decorated players of modern times, Pique would add a fourth Champions League title to his collection four years later, Barca beating Juventus in Berlin to seal a treble under the guidance of Luis Enrique.

The undisputed king of continental club competition, no player relishes the biggest European occasions quite like Cristiano Ronaldo.

No player in the Champions League era has won more than Ronaldo’s five titles, his first coming with Manchester United in 2008 before four victories in just five seasons during a period of European dominance for record winners Real Madrid.

The only player in history to have also scored in three finals, his 128 Champions League goals is an all-time record, as is his tally of 17 in a single campaign during Madrid’s victorious La Decima triumph of 2014.

He continues to thrive at the very highest level, and will be seeking to become just the second player in history to win the tournament with three different clubs with Juventus this season.

The first player in history to win the Champions League with two different English clubs, Sturridge joined this exclusive list after playing his part in Liverpool’s success under Jurgen Klopp last season.

Sturridge’s first success on Europe’s biggest stage came after helping Chelsea to a maiden title in 2012, though despite enjoying the best season of his career at Stamford Bridge – finishing as the club’s joint-leading scorer in the Premier League – he was an unused substitute for the final victory over Bayern Munich.

The forward made seven appearances during Liverpool’s run to glory in 2019, scoring a crucial goal against Paris Saint-Germain in the group stage, but again failed to come off the bench for the Reds’ final success over Premier League rivals Tottenham in Madrid.

Kroos would join Ronaldo during an all-conquering era in the Champions League for Real Madrid, the German at the heart of the side that became the first to defend their crown, winning three consecutive titles between 2016 and 2018.

The midfield metronome had earlier tasted European success at German giants Bayern Munich, defeating Borussia Dortmund in the first ever all-Bundesliga final to complete a historic treble under Jupp Heynckes.

One of the great midfielders of recent years, Kroos also lists the World Cup and four domestic league titles amongst his extensive list of major honours.