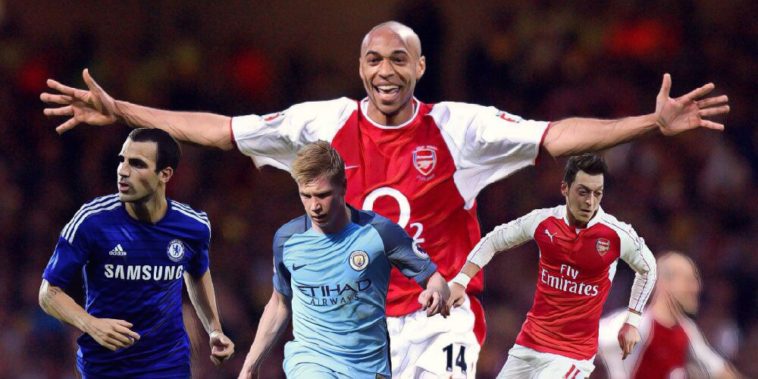 The men who score the goals tend to take most of the headlines, but behind every goal is a creative presence who made it possible.

Whilst the Premier League has long awarded a Golden Boot to the division’s highest goalscorer, the Playmaker Award for the leading assist provider has only been awarded for the past two seasons.

We’ve decided to take a look back at some of the Premier League’s most prolific providers, with the players to have registered 15+ assists in a single season…

The Manchester United legend is widely recognised as the catalyst which sparked an era of dominance under Sir Alex Ferguson.

Signed from rivals Leeds in 1992, Cantona inspired United to a first league title in 26-years in 1993, providing 15 assists along the way.

One of the most technically gifted footballers English football has produced, Southampton icon Le Tissier lit up the Premier League with a series of wonder goals during a memorable career on the South Coast.

A regular goalscorer and nerveless from the penalty spot, Le Tissier’s creative talents also saw him register a career-high 15 Premier League assists in 1994/1995.

The Liverpool local established himself as one of the league’s most exciting wingers during the nineties, capable of gliding past opponents with ease.

McManaman had end product to match his undoubted skill, providing 15 assists as Liverpool finished third in 1996. His creative talents later attracted the attention of Real Madrid, where he would win the Champions League following his arrival in 1999.

We recently discussed McManaman on one of our podcasts, take a listen…

Famed for his set-piece delivery and crossing ability, former England captain Beckham was a regular provider for some of the Premier League’s leading forwards.

A pair of perfectly taken corners had helped United to Champions League success in 1999, and he followed that up with his most prolific league campaign for assists the following year as the club won a second successive league title.

Beckham finished the season as the league’s highest assist provider, the third time in a four-season spell in which he achieved the feat.

After a slow start to life in English football, Frenchman Pires demonstrated just why Arsene Wenger had placed his faith in the winger in 2001/02.

A tally of 15 assists helped fire Arsenal to the Premier League title, before the club completed a domestic double with FA Cup victory over Chelsea.

Pires had played a pivotal role in the club’s success, being crowned as the FWA Footballer of the Year and Arsenal’s Player of the Year.

The diminutive Spaniard is regarded by some as the greatest player in Manchester City‘s history, such has been his impact since arriving at the club in 2010.

The creative fulcrum in which the recent successes in the blue half of Manchester have been built around, Silva registered a tally of 15 assists as City broke a 44-year title drought by winning a dramatic Premier League title race in 2012.

Eriksen has provided 49 league assists in his six seasons in North London, with a tally of 15 his highest in 2016/17 the highest since his move to England.

The flying Manchester City winger was crowned as the PFA Young Player of the Year in 2017/18 following a fine season for Pep Guardiola’s record-breaking champions.

The most recent entry on our list is former Chelsea star Eden Hazard, who enjoyed the most productive campaign of his Stamford Bridge career last season before departing for Real Madrid.

The Belgian international scored 16 goals and registered a league-high 15 assists, winning the Premier League’s playmaker award for the 2018/19 season.

One of two players to feature twice on our list, Manchester City star Kevin De Bruyne has been one of the Premier League’s leading assist providers since moving to the Etihad in 2015.

Few in the division can boast the vision or passing range of the Belgian international, who provided 16 assists during City’s memorable 100-point title campaign in 2018.

Only Manchester United legend Ryan Giggs sits above Spanish midfielder Fabregas in the list of all-time Premier League assist providers, the former Arsenal and Chelsea star having registered 111 assists during his spells at the London rivals.

Having established himself as a key figure at the Emirates as the Gunners moved on from the ‘Invincibles’ era, Fabregas racked up an impressive 17 Premier League assists during a prolific campaign in 2007/08.

Chelsea favourite Lampard is widely remembered for his prolific goalscoring from midfield, with his 211 strikes making him the clubs all-time leading goalscorer.

However, the former England international was also a regular provider of goals too. Lampard played a key role as Chelsea ended a 50-year wait for a league title under Jose Mourinho in 2005, scoring 13 goals and providing a further 18 assists.

His performances saw him being named FWA Footballer of the Year and PFA Fans’ Player of the Year, whilst he also finished runner-up to Ronaldinho for the Ballon d’Or.

The second appearance for Fabregas on our list, who provided 18 assists in his debut season at Chelsea following a €33m move from Barcelona.

2016/17 was perhaps the season that De Bruyne announced his arrival as a star of English football, flourishing under new manager Pep Guardiola and providing 18 assists for Manchester City.

City would only finish third before their period of dominance in the past two seasons, though De Bruyne had become their creative heartbeat.

The Belgian’s 18 assists meant he was the highest assist provider in the division, a feat he would achieve for two consecutive seasons.

Signed as Arsenal’s marquee addition in 2013, the German playmaker has endured an up-and-down career in North London.

Whilst some still claim the midfielder is the club’s finest player, others criticise Ozil’s tendency to drift through games and inability to influence the biggest occasions.

Ozil’s finest season in an Arsenal shirt came in 2015/16, where his vision and passing range saw him come within one assist of breaking the Premier League’s assist record.

19 assists demonstrated Ozil at his creative best, Arsenal fans will hope he can rediscover that form next season.

Having helped Arsenal to a domestic double the season prior, Henry scored 24 goals and provided 20 assists the following season in a stunning individual campaign.

His 20 assists is a landmark that no player has since reached, earning the Frenchman the PFA Player of the Year and FWA Footballer of the Year awards, one of two successive seasons he won the prestigious double of individual honours.

A prolific scorer and provider of goals, the former Arsenal star remains arguably the greatest player in Premier League history.

Read Also: Five of the best Individual Goals ever