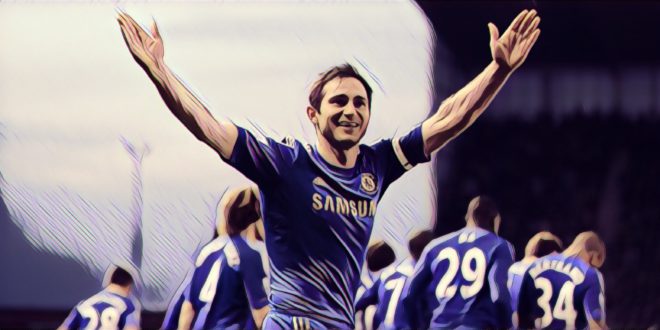 Frank Lampard – 10 of the best quotes by the Chelsea legend

Frank Lampard will go down as one of Chelsea and the Premier League’s greatest ever players.

The former England international was a superb all-round midfielder who scored and assisted more goals than the vast majority of strikers. Here are 10 of the Chelsea legend’s best quotes…

“At school I remember completing a paper about what I wanted to do for a job. I put ‘footballer’ and the teacher told me that being a footballer is not a job. She told me only one in 300 kids make it as a footballer and she would say ‘Do you think you will be the one?’ I said, ‘Yes I do.’ And my classmates would sit there and laugh at me.”

“I can’t stress the importance of working hard enough, work on all aspects of your game. If you does that and you have the ability, you’ll come through.” On what it takes to succeed as a footballer.

“I was having a chat with Luke Shaw and I mentioned Tony Adams and he didn’t seem to know who I was talking about. I said, ‘Are you winding me up?’ and he said ‘Who did he play for?’ I knew then that it was time to retire.” On his decision to retire from international football.

“I’ve enjoyed every minute of travelling and playing for my country. What an honour that is.”

“I’d be unprofessional if I didn’t come on and do my job. I’m a bit lost for words, I didn’t expect to come on and score.” After coming on as a sub for Man City and scoring against his beloved Chelsea.

“Everyone’s got unfinished business with Barcelona. They’re the greatest team in the world.”

“It is always bad to lose to Tottenham because they make DVDs of it for the next ten years.”

“Training’s completely different now. It used to be a lot of running and work without the ball. Now it’s all with the ball, which any player loves.”

“When you take a lot of stick you want to ram it down people’s throats.” On his relationship with his boyhood club West Ham’s fans.

“Nobody expects a footballer to have any kind of an IQ, which is a bit of an unfair stereotype.”