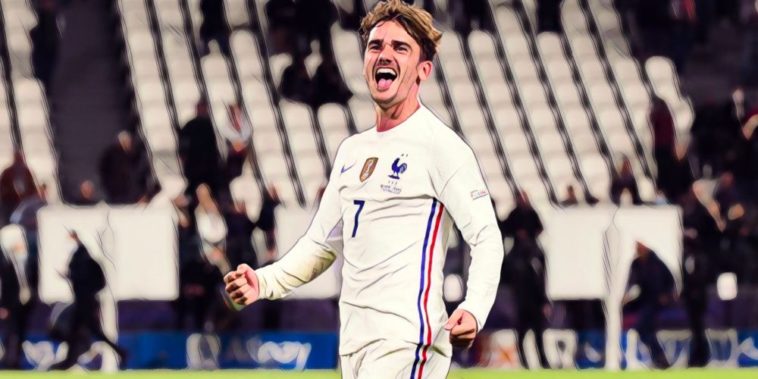 France’s recent Nations League triumph also marked a special milestone for forward Antoine Griezmann, with the Atletico Madrid man having reached his 100th cap for his country in Sunday’s 2-1 win over Spain.

That century of international appearances moves the 30-year-old into an elite club of Les Bleus icons, with only eight players having played more games for the great European nation than the former Barcelona man.

Let’s take a look at who those nine players are to have reached 100+ caps for France.

While it’s been a tough last few seasons at club level for the forward, he has continued to perform for his country, with Sunday’s victory remarkably his 57th consecutive international appearance – a French record.

In fact, the last time he did not feature for France was way back in June 2017 in a 3-2 win over England, with Griezmann having been a mainstay of the national team ever since, notably playing a pivotal role in the 2018 World Cup triumph.

He had also finished as the top scorer at Euro 2016 as the hosts reached the final, netting six goals at the tournament to really catapult himself into the spotlight. Seven years on from his international bow, he sits third on the all-time top scorers list for France with 41 goals, leaving him level with the great Michel Platini and just ten behind Thierry Henry.

The Atletico man is also likely to move even further up the all-time appearance list, as he is only three caps behind his current international coach, Didier Deschamps, who enjoyed a hugely successful 11-year stint in the side.

After making his debut in 1989, the former Marseille and Juventus man went on to captain his country to success at the 1998 World Cup, before lifting another trophy two years later as France became European champions.

Following his retirement, he eventually took charge as manager in 2012, before going on to guide the nation to another World Cup triumph – 20 years on from doing so as a player – to become one of just three men to win the competition as both player and manager, alongside Brazil’s Mario Zagalla and Germany’s Franz Beckenbauer.

A former teammate of Deschamps, Patrick Vieira was another part of the side that won back-to-back major honours between 1998 and 2000, with the former Arsenal captain playing a particularly significant role at Euro 2000.

He would go on to be named captain in August 2006 following the retirement of Zinedine Zidane afer the defeat to Italy in that summer’s World Cup final, earning his 100th cap later that year in a 1-0 win over Greece.

The then Inter Milan star would, however, feature just seven more times for his country over the next few years, making his last appearance against Nigeria in June 2009, before calling it quits after missing out on the squad for the 2010 World Cup.

Just ahead of Vieira is arguably the most iconic French footballer of all-time and one of the greatest talents to have ever played the game, with Zidane the real driving force behind the nation’s success in the late 90’s and early 2000’s.

At the World Cup in ’98, the former Juventus man netted twice in the final as France overcame Brazil to clinch their first triumph in the competition, with the victory made all the more sweet as it came on home soil.

Two years on, Zidane was named player of the tournament at Euro 2000, before calling time on his international career in 2004 after two disappointing performances at the World Cup in 2002 and Euro 2004.

That decision was reversed to help France qualify for the World Cup two years later, with the Real Madrid icon going on to again win player of the tournament as his side surged to the final, albeit with his last involvement in professional football seeing him infamously sent off for headbutting Marco Materazzi, having earlier scored from the penalty spot.

He may have lost his place in the squad since Euro 2020, yet Olivier Giroud remains a certified France legend, having been a consistent goalscoring presence for his country over the last decade.

The striker didn’t make his senior international debut until the age of 25, yet has gone on to be a mainstay since then and currently sits behind Thierry Henry on the all-time scorer’s list with 46 goals in 110 games, with a World Cup winners medal also to his name.

With only five goals needed to overtake Henry on goalscoring list, it had seemingly looked certain that the 35-year-old would achieve that feat, only to be left out of the squad by Deschamps back in September his international future looks uncertain, particularly with Karim Benzema back in the fold.

One of the finest players of his generation, the former Chelsea defender enjoyed an 11-year stint with the national side, playing a key role in the triumphs of ’98 and 2000, while also going on to take on the captaincy following the retirement of his friend Deschamps in 2001.

At club level, Desailly won back-to-back Champions League trophies with two different teams – the first player to achieve that feat – winning with Marseille against AC Milan in 1993, before then triumphing with the Italian side a year later, scoring in the 4-0 win over Barcelona in the final.

After five years in Milan, the versatile centre-back made the switch to Stamford Bridge in 1998, winning the FA Cup during his six-year stay in west London, before departing for Qatar in 2004 – the same year in which he retired from international football following that summer’s European Championship.

As previously mentioned, Henry is the current top scorer in French history with 51 goals in 123 caps, having originally made his debut in 1997, before going on to eventually retire from international football following the 2010 World Cup in South Africa.

His 13-year national team career saw him net three times at the World Cup in ’98, before matching that tally three years later at Euro 2000, notably scoring the equaliser in the semi-final victory against Portugal.

He would go on to feature at five more major tournaments, scoring three times as France reached the World Cup final in 2006, although with a golden generation coming to an end, the Arsenal legend was at times left to shoulder too much responsibility.

One of three active players on this list – alongside Giroud and Griezmann – the Tottenham Hotspur stopper has been the undisputed number one for his country for over a decade, having made his debut back in 2008, before truly cementing his starting berth with a strong showing at the 2010 World Cup.

The 34-year-old has also been the first-choice captain of the national team since 2012, going on to lift the trophy as France won the World Cup in 2018, while he recently added to that with victory over Luis Enrique’s side in the Nations League at the weekend, making a handful of vital saves in the closing stages to secure the victory.

With no signs that he is slowing down just yet, the likelihood is that the former Lyon man will go on to surpass the man below as the nation’s record appearance maker at next year’s World Cup in Qatar.

The man he will have to catch is former Barcelona and Juventus defender, Lillian Thuram, who made 142 appearances in an international career that spanned 14 years between 1994 and 2008 and saw him win both the World Cup and European Championship.

In 1998, in particular, the then right-back was superb as France built their success on the strength of the back four, which shipped just two goals throughout the whole tournament, with Thuram also overcoming an error in the semi-final win over Croatia to score two rare goals – the only goals of his entire international career.

Like Zidane, Thuram returned from a brief retirement to help qualify for and feature at the 2006 World Cup, before eventually calling it quits after another major tournament involvement at Euro 2008.