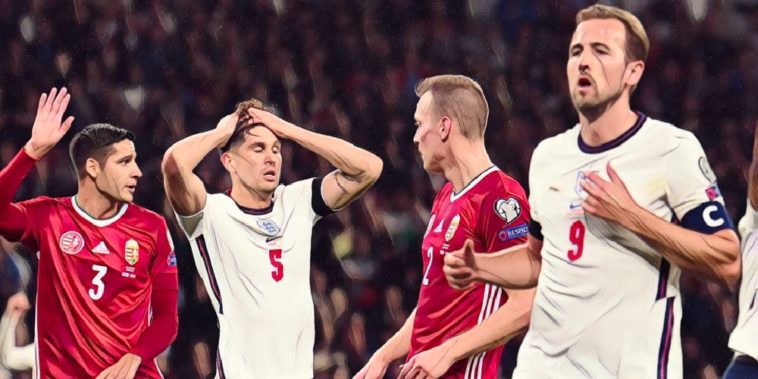 England dropped points for just the second time in their current World Cup qualifying campaign, as they were held to a 1-1 draw by a spirited Hungary side at Wembley on Tuesday.

Having dispatched minnows Andorra at the weekend, a win for Gareth Southgate’s men would have effectively sealed their passage to the Qatar finals with two games still to play, although they produced a laboured display against a side who had impressed in the ‘Group of Death’ at Euro 2020.

The Three Lions boss had opted for an attacking lineup featuring Mason Mount and Phil Foden in midfield roles, yet the two starlets were unable to have influence proceedings as the hosts struggled against the intense Hungarian press.

That positive start for the visitors was rewarded midway through the first-half as they were awarded a penalty, after Luke Shaw was penalised for a high foot on Loic Nego, with striker Roland Sallai duly converting to give his side a shock lead.

England would hit back just before the breakthrough John Stones, following an excellent whipped free-kick from Manchester City teammate Foden, yet the hosts struggled to fashion any real clear-cut chances to take the lead, with the draw ensuring there is still some work left to do in next month’s international break.

Following that stalemate – which still leaves Southgate’s side three points ahead of Poland at the top of Group I – the 51-year-old admitted that his players were far from their usual high standards.

“It was a disappointing performance,” Southgate said. Full credit to Hungary, I thought they caused us a tactical problem. We weren’t fluid and I didn’t think we played at the level we needed to play.

“It’s difficult to pinpoint. We’ll go away and think of the balance of the team a little bit, but individually, we can do better as well and we made lots of simple mistakes with the ball.

“I think we have to accept that we dipped below our usual levels. That was a surprise, but it was a night where individually and collectively, we didn’t hit the heights we have been… We didn’t quite do enough to win the game.

“We didn’t create as much as we would have hoped, but we have to give Hungary credit to that. We lost a little bit of positional discipline at times so there’s a lot for us to reflect on and work on.

“We wanted to try to get a spark. We’d struggled to create many clear chances and hoped freshness at that stage may have been able to produce that.

“We changed the system because we were a little open in counter-attacks and we had to solidify from that to start with. We hadn’t been opening them up with 4-3-3, and so with two 10s and wing-backs we wanted to try to pose them a different problem. But we didn’t create any more chances than we had been.

“I thought we were a bit anxious with some of our passing and I thought we were trying to force things a little bit. We needed to simplify our game a little bit and move the ball more quickly at times. Lots that we can go away and feel like we should have been better at.”

Much of the talk before and after the game was about the inclusion of both Mount and Foden in attacking midfield roles, and Southgate admitted his side produced a ‘disjointed’ performance.

“We’ve been 4-3-3 a lot, but with different profile of number eights. Today we wanted to look at something a bit different and didn’t have Phillips anyway, who has been an essential part of that midfield, and we knew we had to break a packed defence tonight. I’m not certain it was about the profile of players… we didn’t have the same fluidity we’ve come to expect.

“We shouldn’t judge things on one game in terms of that sort of experiment because right across the board from the start, we weren’t sharp with our play. We gave the ball away, we were overrunning things and I think we were underneath it. It’s the first time in a long time and we have to hold our hands up to that.

“It was one of those nights where we started poorly, we didn’t get pressure on them, we gave needless passes away that led to counter-attacks which gives you the feeling you’re stretched… It was unusually disjointed. We need to make sure we put it right for next month.”

England round off their qualifying campaign with a clash against Albania at home on 12 November, before facing a trip to San Marino a few days later.