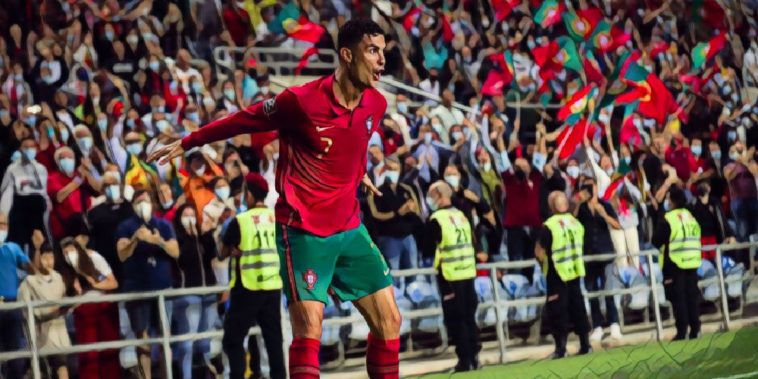 The records continue to tumble for Cristiano Ronaldo after the 36-year-old netted his 10th international hat-trick in the 5-0 win over Luxembourg on Tuesday evening, to help edge Portugal ever close to qualification for next year’s World Cup in Qatar.

The Manchester United man’s latest treble ensured he is now the only man to have scored ten hat-trick’s for his country, while it also marked the 58th time he has scored three or more times in a game during his career, for both club and country.

Having also recently become the highest-scoring player in international history (115), as well as the record appearance maker by a European player (182), the veteran forward continues to reach remarkable new heights.

We’ve decided to take a look back at all 10 hat-trick’s from the great man’s stellar international career so far.

Surprisingly, It took the Portuguese icon 10 years from his debut in 2003 to net a first hat-trick for his national side, with the then Real Madrid man bagging three second-half goals in a thrilling World Cup qualifier with Northern Ireland at Windsor Park back in 2013.

With the hosts 2-1 up and with a man advantage after Helder Postiga’s dismissal just before the break, they looked on course for a famous victory, before a red card for former West Brom man Chris Brunt on the hour mark and the brilliance of Ronaldo flipped the match on its head.

In the space of just 15 second-half minutes, the forward had brutally dismantled Michael O’Neill’s side, first heading in from a corner before adding a second with another superb header after an excellent ball in from Fabio Coentrao to make it 3-2.

The hat-trick – and the victory – was wrapped up seven minutes from time as his drilled free-kick squirmed through the Irish wall and into the back of the net, with a pivotal deflection off Steven Davis leaving ‘keeper Roy Carroll with no chance of keeping it out.

Having waited 10 years for his first international hat-trick, his second would follow just two-and-a-half months later, and it would arguably be one of his most memorable and most vital trebles for his country.

Ronaldo produced a sensational second-half showing to drag his side to the 2014 World Cup, having overcome Sweden in a relentless play-off second-leg.

Billed as a battle between the Madrid star and the opposition’s leading light Zlatan Ibrahimovic, the two men didn’t disappoint as they netted five goals between them in a barnstorming second-half.

Already leading 1-0 from the first-leg, Ronaldo raced clear to fire home just five minutes after half-time, only for two goals in the space of four minutes from counterpart Ibrahimovic to completely alter the complexion of the tie.

Not to be outdone by the enigmatic Swedish striker, Ronaldo again broke clear to calmly slot home for his second of the night, before all-but sealing the victory – and passage to the finals in Brazil – just moments later after latching onto a stunning Joao Moutinho pass and firing high into the roof of the net from the angle.

He would have to wait two years for his next hat-trick, this time coming against Armenia in a dramatic Euro 2016 qualifier, with the Portuguese talisman once again bailing his side out of a difficult situation.

The unfancied hosts had taken a shock lead after just 14 minutes, before up stepped Ronaldo to pull his side level from the penalty spot midway through the first half.

The skipper then put his side ahead just after the break after showing great determination to get ahead of his man and expertly dinking his effort over the advancing goalkeeper, before completing his treble just three minutes later with a stunning dipping strike from just outside the box.

With the away side 3-1 up, they were made to endure a nervy end to the match following Tiago’s red card midway through the second-half, albeit with Hrayr Mkoyan’s late strike proving nothing more than a consolation, as Ronaldo’s third successive hat-trick for club and country ultimately made the difference.

Just a matter of months after helping his side to European glory at Euro 2016, Ronaldo achieved a new feat by scoring four times in a match for the first time in his international career, as Portugal dismantled Andorra in a World Cup qualifier.

The Madrid star showed no mercy against the minnows, scoring twice inside the first four minutes to set the tone for a tough evening’s work for the visitors, first firing in on the volley with his left foot, before heading home at the back post to effectively rubber-stamp the victory.

A Joao Cancelo header made it 3-0 at half-time, before Ronaldo completed his hat-trick almost instantly after the restart as he expertly volleyed in from Andre Gomes’ cross, with his fourth and final goal of the night seeing him turn home after getting on the end of Jose Fonte’s flick-on.

Andorra’s night had got even worse by two dismissals either side of that goal, both for fouls on the hat-trick hero, before current RB Leipzig striker Andre Silva added a late sixth to rub even further salt in the wounds.

He may have developed a reputation as something of a flat-track bully against the continent’s smaller nations, although it’s hard to argue with the sheer ruthlessness he shows time and again, even with everything he has already won in the game.

Against the Faroe Islands in 2017, Ronaldo once again made the most of an encounter with one of Europe’s so-called lesser sides, netting three times as Portugal ran out 5-1 winners in a comfortable World Cup qualifier.

His first of the night came inside just two minutes, as he latched onto Bernardo Silva’s dinked cross and produced a stunning scissor-kick at the back post, before adding his – and Portugal’s – second  from the penalty spot with a cool finish into the top right-hand corner.

The visitors did, however, respond well to pull a goal back to make it 2-1, only for goals from William Carvalho and Nelson Oliveira – either side of a classy Ronaldo third – to put the game firmly out of sight.

The standout pick from this list, Ronaldo chose the biggest stage to net his sixth international hat-trick, as his treble secured a point against neighbours Spain in a hugely entertaining group stage clash at the 2018 World Cup.

Arguably his finest hour in a Portugal shirt, the prolific marksman fired his side ahead from the penalty spot after just four minutes, having been brought down in the box by Madrid teammate Nacho.

Diego Costa grabbed an equaliser midway through the first-half, before Ronaldo scored his second in somewhat fortuitous fashion with his speculative strike squirming through the hands of David De Gea to make it 2-1 just before the interval.

#OnThisDay in 2018, Cristiano Ronaldo netted a hat-trick for Portugal in their 3-3 draw with Spain at the World Cup.

The goal that confirmed his hat-trick is worth waiting for 🎯 pic.twitter.com/KbL3HEi6cN

A second from Costa and a redeeming stunner from Nacho look destined to hand the points to La Roja, but, as ever, Ronaldo ensured it would be he who had the last word, capping an iconic World Cup display with a sensational dipping free-kick just two minutes from time, to rescue a point for the European champions.

Ever the man for the big occasion, the then Juventus star would grab the headlines again a year later, popping up with another triple against Switzerland in the UEFA Nations League semi-final, with Portugal going on to beat the Netherlands in the showpiece.

In that last-four clash in Porto, Ronaldo again scored from a free-kick, as he had done in Russia, with his dipping, swirling effort firing into the bottom corner and completely wrong-footing ‘keeper Yann Sommer.

A hugely contentious VAR decision saw the Swiss awarded a penalty – which Ricardo Rodriguez dispatched – after the hosts thought they’d been awarded one of their own.

Furious with that decision, Ronaldo vented his frustration by firing his side to the final with two late goals, first sweeping the ball into the bottom corner after Bernardo Silva’s pull back, before making space for himself with his trademark stepover and again finding the same corner with a curling finish.

As he had done against Andorra four years earlier, the evergreen striker netted four times in a match for his country, as Portugal comfortably overcame Lithuania in a Euro 2020 qualifier with a 5-1 away victory.

An early handball allowed the skipper to convert from the penalty spot, before the hosts remarkably pulled a goal back midway through the first-half after Vytautas Andriuskevicius’ header snuck in off the post.

Facing a potential upset, the dominant visitors turned the screw in the final half-an-hour to romp to victory, with Ronaldo putting his side ahead with perhaps the most fortunate goal of his career, as he saw his 20-yard strike bounce up onto the head of ‘keeper Ernestas Setkus and spin into the back of the net, with the goal awarded to the forward despite looking like an own goal.

He added a third soon after, getting on the end of Bernardo Silva’s dinked cross, before the two combined again for Ronaldo to add his fourth with a composed finish into the bottom corner, with William Carvalho completing the rout in stoppage time.

Just a few months later Lithuania were again on the receiving end of a Ronaldo haul, as the main man bagged three in a brutal 6-0 win for the European Championship holders.

Like the reverse fixture, the Juve forward scored an early penalty to hand his side the lead, before doubling his tally on 22 minutes with a delightful curling finish, not even breaking stride as he dispatched the ball into the back of the net.

Goals from Pizzi, Goncalo Paciencia and Bernardo Silva within 18 minutes of the restart ensured yet another heavy defeat for the visitors, with Ronaldo adding the gloss soon after with a composed strike into the bottom corner.

The 36-year-old bagged his tenth and latest hat-trick against Luxembourg on Tuesday night, with eight of those trebles having come since his 30th birthday.

Fresh from scoring in a friendly with World Cup hosts Qatar, the Manchester United star swiftly found the target in the tournament qualifier, netting twice from the penalty spot inside 13 minutes – the second spot-kick having to be taken twice due to encroachment from his teammates.

Further strikes from Bruno Fernandes and Joao Palhinha – who adopted his captain’s trademark celebration – ensured there would be only one winner in Algarve, before Ronaldo bagged his 115th international goal three minutes from time with a fine header to complete his treble.

He had almost wrapped up his hat-trick earlier on in the second-half, yet both he – and the world – were denied a stunning overhead kick by the reflexes of ‘keeper Anthony Moris.

What a goal it would have been👏 pic.twitter.com/dp04D0WzmO

It was perhaps unsurprising that Ronaldo enjoyed such a profitable evening against the heavy underdogs, as he has now scored more goals against them (9) than against any other international opponent.