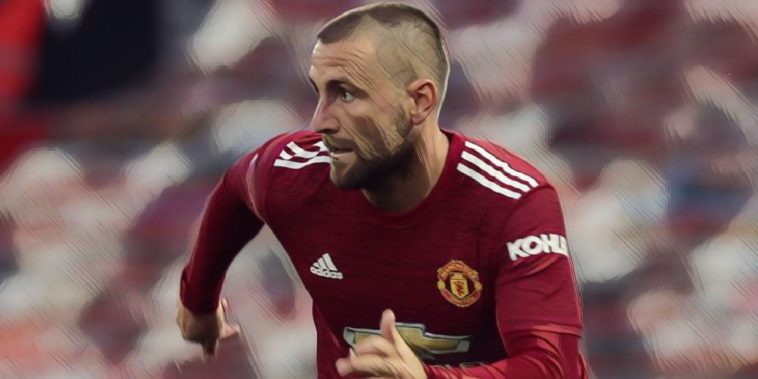 There are few better things in football than a redemption story. Spectacular goals and academy debuts have their place, but there is something genuinely inspiring and emotional about seeing a player emerge from a moment of struggle to become the best versions of themselves on the pitch.

As is commonplace for young English talents — particularly those at Manchester United — he was saddled with unrealistic expectations from the moment he arrived at Old Trafford back in 2014 as the most expensive teenager in world football.

Despite his talent, he was never truly given the conditions to succeed. United’s defence continued to shift among a revolving cast of characters, denying Shaw the opportunity to forge the necessary relationships to truly impress. And, of course, his consistent injuries problems created a mental as much as a physical barrier towards fulfilling his potential.

Perhaps that was why, when Shaw did play, his performances were entirely forgettable. He seemed to drift through a game without ever making a true impression on it as if he was a passive object within it as opposed to an agent who could act upon it. That made discerning his strengths and weaknesses difficult.

He wasn’t a defensive stalwart, someone you could trust to lock down the left-hand side. He didn’t commit players in the final third and dazzle with his explosive pace or deft skill. He wouldn’t whip a cross in from deep that made you take notice of his superb vision and technique. And in a tactical cycle where fullbacks are more crucial to teams than ever, that lack of defined traits left many feeling that he would never become anything more than a decent left-back who probably wasn’t good enough to start for Manchester United in the long term.

Certainly, that was the impression when Jose Mourinho was in charge. His abrasive, confrontational style of man-management seemed to get the best out of Ashley Young, Marouane Fellaini, Jesse Lingard, and others. But the Portuguese’s public chastising of Shaw in press conferences and interviews did little to boost the Englishman’s form. If anything, it seemed to drain any remaining resolve and confidence from him. Towards the tail end of Mourinho’s tenure, Shaw did begin to cement his starting position, although that was more a product of a lack of alternatives as opposed to a significant progression in his form.

Ole Gunnar Solskjaer’s appointment seemed to rekindle the spark in Shaw’s career. The Norwegian is an entirely different personality to his predecessor in almost every sense, with a softer, less intense approach to dealing with players.

For all the criticism Solskjaer has received, few have challenged his capacity to maintain a positive and healthy squad dynamic in Carrington. That side to management is often ignored because it’s so intangible, and therefore difficult to analyse in any concrete way. But it’s important, and the impact Solskjaer has had on Shaw is undeniable, as the 25-year-old himself has made clear.

Manchester United's Player of the Month for March.

What a season he's having 👏pic.twitter.com/1dwE2edPhz

It has been a gradual process, with Shaw making steady strides ever since Solskjaer’s appointment, though it wasn’t until this campaign where the fruits of that journey began to become clear. Once a decidedly average fullback, he’s become an integral component of Manchester United’s offensive weaponry.

What is perhaps most striking about Shaw is the roundness of his development, the way in which he’s become a genuinely excellent operator in a number of aspects of his play.

Firstly, he’s become a superb ball-carrier, frequently pushing United up the pitch with powerful, driving runs from deep. Shaw makes 3.07 carries into the final third per 90, placing him in the 98th percentile among other defenders in Europe’s top five leagues. In a team that can sometimes struggle with ball progression from deep without the presence of Paul Pogba, that ability has become all the more important.

His passing has been similarly impressive. Shaw’s deliveries from deep have dramatically improved, and while still not his foremost strength, it gives him another way to influence the game.

Where he’s really thrived is as a progressive passer from deep in the left inside channel; playing angled, penetrative passes into the likes of Bruno Fernandes or a striker dropping in between the lines. He also is more comfortable providing cutbacks from deep, giving end product to his aforementioned ball-carrying.

One of the other elements of Shaw’s game that extends his influence in possession is his press resistance. Modern football has given rise to a host of press-resistant central midfielders such as Matteo Kovacic, Frenkie de Jong, Tanguy Ndombele. These are players who, by virtue of their ability to attract and then evade opposition pressure in congested areas, can allow their teams to maintain possession amid intense pressure from an opposing team.

Fullbacks are rarely discussed as being capable of performing a similar role, yet Shaw has assumed that responsibility for Manchester United. He analyses situations quickly and intelligently uses his body to retain possession whilst under pressure. He makes 8.7 passes per 90 while under pressure from an opponent, placing him in a category of his own when compared to other fullbacks. Given United’s lack of a highly structured build-up play that can often make resisting a high press easier, Shaw’s press resistance is an increasingly vital aspect to the team’s overall play.

No defender has created more chances than Luke Shaw in the Premier League this season 🎯🔴 pic.twitter.com/8CcSfMkuEE

That level of improvement is, of course, a testament to Solskjaer’s man-management and Shaw’s own hard work.

Yet another factor has been the arrival of Alex Telles in the summer. The Brazilian arrived in Manchester as one of the best players in Portuguese football for the past few years, having captained FC Porto to multiple title victories. From Shaw’s new-found proficiency in delivering set-pieces to adjustments in his crossing technique, it’s easy to see Telles’ influence on the Englishman and how he’s contributed to his improvement.

We often think new signings can extract higher levels of performance from a player already at the club by providing new competition. In this case, Telles seems to also have provided a technical boost in Shaw’s play. Intentional or not, his acquisition appears to have been a masterstroke in getting the best out of Shaw.

Shaw’s improvement is also a reflection of his budding relationship with Marcus Rashford. Along with Harry Maguire cementing his role as United’s left-sided centre-half, Rashford and Shaw have obvious chemistry down the left-hand side. He knows when to make overlapping or underlapping runs based on Rashford’s position on the pitch.

They’re excellent at combining with quick one-twos. They both make decoy runs to create space for each other. The growing continuity between Rashford and Shaw gives United a reliable, young, and exciting nexus that both players — and the team as a whole — will benefit from.

As the Euros approach, Luke Shaw’s redemption is taking place at precisely the right time. He seems poised to become England and Manchester United’s left-back for years to come, and that’s good for all parties involved.

In a football season that has often been bizarre and, at times, frustrating, Shaw’s comeback is a good-feel story we can all get behind.