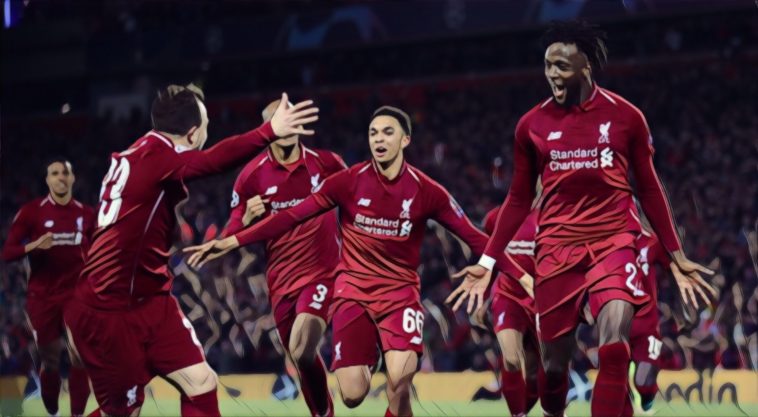 Liverpool need another huge European performance as they prepare to face Real Madrid this evening, with Jurgen Klopp’s side trailing 3-1 following a first leg defeat in the Spanish capital.

If the Reds are to reach a Champions League semi-final showdown with Chelsea, they are going to have to pull out another one of the incredible Anfield performances they have become known for on this stage over the years.

Real Madrid were dominant during the first leg as the record 13-time winners controlled the game in almost effortless fashion, with Liverpool needing to raise their levels significantly this evening if they are to avoid a last eight elimination.

Securing progress will be no easy feat, but a two-goal deficit at Anfield is small fry for a club with their history. They’ve overcome bigger odds before, after all.

The week of Liverpool’s home leg with Barcelona, Jurgen Klopp insisted that his team would go out to win and if they failed, then they would fail in “the most beautiful way”. Instead they won in the most spectacular way possible, demolishing the Spanish champions 4-0 in what is possibly the greatest victory Anfield has ever witnessed.

And to make it even more implausible, the Reds were shorn of Mohamed Salah and Roberto Firmino, two of their most important players, for the semi-final, while having to rely on Divock Origi to be their hero.

Liverpool had lost the first leg at the Nou Camp 3-0, crushing hopes of a return to the Champions League final, where they had lost to Real Madrid a year previously. But they clung on to hope nonetheless, especially when Origi opened the scoring in the seventh minute.

Barça appeared to recover well going into half-time, but everything flipped on its head following the interval. A quick-fire brace from substitute Georginio Wijnaldum put the aggregate score at 3-3.

As images of the Catalan outfit’s collapse to Roma a year previously flashed before the visitors’ eyes, it was now all to play for.

At this point Barcelona would have settled for extra-time and penalties, but their lack of awareness and concentration at set pieces – something Klopp later said they had noted in analysis sessions – bit them on the backside, as Trent Alexander-Arnold took full advantage by setting up Origi with a quick corner routine for one of the club’s most iconic moments.

As the contents of this article will attest, Liverpool are no strangers to a stirring comeback in front of their home supporters. But this one might just top the lot.

Five of the best Liverpool matches against Spanish opposition

About as dramatic as it gets when it comes to European football and one of, if not the, most memorable Europa League ties of all-time. Jurgen Klopp returned to face his former club – having joined Liverpool earlier on in the season as Brendan Rodgers’ successor – after he had brought great success to Borussia Dortmund.

Neither side could be separated in the first leg, as it ended 1-1 at the Westfalenstadion. The return fixture at Anfield was a different matter, however, as the Germans raced into a two-goal lead within the first nine minutes. The Reds would need to score three times to progress to the last four.

Divock Origi pulled one back just after half time, but a Marco Reus goal just before the hour mark seemingly killed off the tie as a contest; the hosts would need to score three times in the space of 30 minutes to go through.

In scenes reminiscent of that night in Istanbul, Liverpool, buoyed by a raucous atmosphere, clawed their way back into the game with goals from Philippe Coutinho and Mamadou Sakho. The away goals rule meant that Dortmund would still progress — that is, until Dejan Lovren of all people popped up to score an injury-time winner.

That finish also gave us this incredible piece of commentary/white noise from John Aldridge:

The home side needed to win by two clear goals in order to progress to the knockout rounds, something that was not a foregone conclusion given the Greek outfit had won their previous encounter in September. It was made all the harder for them when Rivaldo scored a delicious free-kick in the 26th minute, meaning they needed to win by three goals.

Florent Sinama-Pongolle (you remember him, right?) pegged one back almost immediately after the second-half got underway, but Liverpool toiled for long stretches without making hay. That was until Steven Gerrard’s mini me Neil Mellor slid in from close range with ten minutes left on the clock to put them within reach.

And then, five minutes later, Gerrard scored that goal:

The hometown hero stood alone 30 yards out from goal, arms outstretched as if to say “just give me a fucking go”, before the ball finally fell to him. It was hardly the ideal position to have a crack with so much riding on the result, but for Gerrard it was exactly where he wanted it. When he winds it up from long range, there’s no stopping it from hitting the back of the net.

Liverpool won 3-1 and the rest, as they say, is history.

Liverpool were lucky to come away from the first leg of this tie down one goal having put in a poor display by their standards, but the low scoreline did at least give them a chance of progressing to the next round.

Within just 42 seconds of the game Kevin Keegan scored with an outrageous attempt from an acute angle to put the Reds level on aggregate, but Saint-Etienne hit back soon after, gaining that all-important away goal through a spectacular 30-yard strike from Dominique Bathenay.

The Merseysiders were up against it now; they needed two goals to progress, but Les Verts had only conceded once in their previous nine games in Europe. They had two things on their side, however: time and the Anfield crowd.

Liverpool managed it in the second-half, thanks to a 59th-minute strike from Ray Kennedy, followed up by an 84th-minute goal from David Fairclough. The atmosphere in the ground was truly electric that night and the performance set the template for “one of those European nights” for the club.

The home side conceded two goals to Club Brugge in the opening 15 minutes of the first leg at Anfield, a disastrous start to the game. Jimmy Case came on at the interval, but missed a sitter moments later.

It did not appear to be Liverpool’s night, but Ray Kennedy, Case and Kevin Keegan all scored in a six-minute span (this sounds awfully familiar) to flip the game on its head. A 1-1 draw in the return fixture ensured the trophy made its way back to Merseyside.

The two sides would meet again in the European Cup final four years later, with Liverpool winning once more, this time a more straightforward 1-0 scoreline at Wembley.

Read: Every English club to have won the Europa League or Uefa Cup