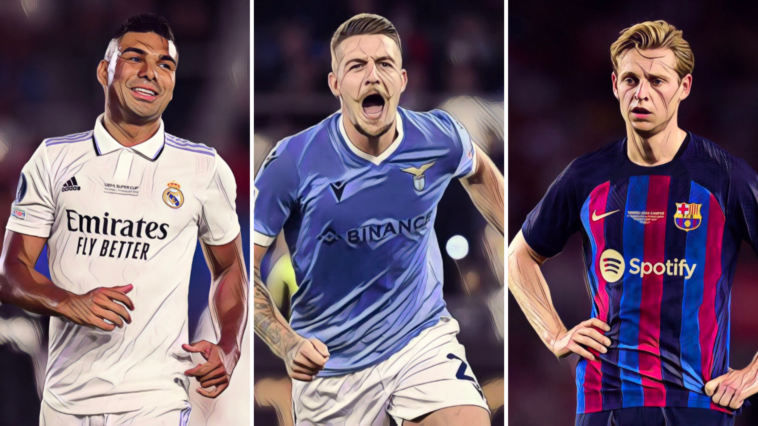 Manchester United are set to dominate the gossip columns over the final weeks of the summer window, with a nightmare start to the season having prompted a desperate dash for reinforcements.

Multiple new reports emerge each day with the rumour mill in overdrive right now and countless players across Europe have been linked with Old Trafford this summer.

We’ve attempted to whittle down the hundreds of transfer rumours from the summer so far and pick a best XI of those linked with Manchester United.

Yann Sommer is one of the freshest rumours of the summer window, with recent reports suggesting United are interested in a deal to sign the Borussia Monchengladbach goalkeeper.

David de Gea’s disastrous performance at Brentford has led to speculation over the signing of a new shot-stopper and Sommer is viewed as an experienced option who could provide competition and cover for the under-fire Spaniard.

Manchester United are interested in Yan Sommer as backup goalkeeper, one of 3 options in the list – as called by @AndreasBoeni. 🔴 #MUFC

Sommer has new contract bid [deal until 2025] from Borussia ‘Gladbach with chances to stay.

Sommer has been an excellent servant across eight seasons in the Bundesliga, while has impressed at international level with 74 caps for Switzerland. However, the Metro are reporting that Sommer has reservations around a move to Manchester with a World Cup looming, given his first-choice status in Germany.

Right-back remains on the agenda for United in the final weeks of the window, with neither Diogo Dalot or Aaron Wan-Bissaka having convinced. The latter is believed to free to leave with former side Crystal Palace keen on a deal to bring the defender back to Selhurst Park.

Denzel Dumfries has been mentioned as a potential replacement. The Netherlands international signed for Inter Milan in a €15m deal last summer after impressing at Euro 2020.

The marauding wing-back scored five goals and provided four assists in 33 league appearances last season and Dumfries would provide an attacking impetus from full-back. Chelsea have also been linked.

Manchester United were linked with joining the race for Matthijs de Ligt this summer, with complimentary comments from the Juventus defender regarding Ten Hag adding fuel to the fire.

Chelsea were also keen on a deal, but De Ligt decided to turn down interest from the Premier League and signed for Bayern Munich.

The Dutch international – who captained the Ajax team that won a domestic double under Ten Hag in 2018/19 – cost the Bundesliga champions £68m and has signed a long-term deal at the Allianz Arena.

A long-term name on the club’s radar, Pau Torres was understood to be a transfer target for United last summer before the Red Devils decided on a deal for Raphael Varane.

The Villarreal centre-back enhanced his reputation last season after forming part of the team that reached the Champions League semi-finals, with United again linked following the erratic form of their defensive options.

Villarreal will compete in the Europa Conference League this season, but Torres has so far remained with his boyhood side. United instead signed Lisandro Martinez, who will provide the left-footed balance among the club’s centre-back group.

Sergino Dest is another name Ten Hag knows well, having overseen the full-back’s emergence into the Ajax side.

Dest spent just one season as a regular at Ajax before completing a move to Barcelona, but has struggled to convince in Catalonia and has been linked with an exit this summer.

🚨 Manchester United and Barcelona are in advanced talks over Sergiño Dest for €20M.

Comfortable on either flank, he has been named as a potential addition for the Red Devils at right-back and is valued at around £17m. United have already signed Tyrell Malacia from Feyenoord this summer to provide competition for Luke Shaw at left-back.

Midfield was the focus at the start of the transfer window and with less than two weeks until the deadline it remains so.

Casemiro is the latest name linked with a move to the Premier League with United making an ambitious attempt to sign the Real Madrid midfielder. The 30-year-old is a five-time winner of the Champions League and was an integral part of the Spanish side’s success in the competition last season.

Manchester United are progressing in talks with Real Madrid for Casemiro as the player is interested in a move, reports @David_Ornstein pic.twitter.com/CMpJsw7lfB

United are reportedly willing to offer the Brazil international a huge contract to move to the Premier League, while Real Madrid have already signed Aurelien Tchouameni and Eduardo Camavinga with an eye on the future of their midfield make-up.

You would have had to have been living under a rock, on another planet, in a galaxy far far away, to have not been subject to Manchester United and Frenkie de Jong rumours this summer.

Erik ten Hag made the signing of De Jong his number one (and for some time, only) midfield target with the Dutchman keen to build his side around the former Ajax star.

🚨 Manchester United's offer for Frenkie De Jong has expired. He has refused to sign for them.

The problem? De Jong’s apparent reluctance to leave Barcelona and/or join United, despite the Catalans doing their utmost to usher the 25-year-old out the exit door. The small figure of £17m owed to De Jong in unpaid wages has been a further complication amid the chaos at the Camp Nou.

A favourite of the gossip columns for some time, it just wouldn’t be a transfer window without Sergej Milinkovic-Savic being linked with leaving Lazio.

Seven seasons of stellar service in Rome have seen the coveted Serbian linked with almost all of Europe’s elite clubs, with United reported to have renewed interest this summer.

🚨 Manchester United have finally been in talks with the agents of Lazio midfielder Sergej Milinković-Savić.

Lazio will drive a hard bargain should the Red Devils follow up their interest with a bid, but the 27-year-old – scorer of 11 goals and provider of 11 assists in Serie A last season – is the sort of instant upgrade required in midfield at Old Trafford.

Another of the Ajax-alumini placed on Ten Hag’s transfer wish-list, Antony’s fine form in the Eredivisie has turned heads across the continent.

The 22-year-old has become a full international with Brazil since swapping Sao Paulo for Amsterdam, where he scored 12 goals and provided 10 assists for the Dutch champions last season.

Under no pressure to sell after a series of exits already this summer, Ajax’s sky-high asking price was initially said to have rebuffed United’s interest. As the transfer window enters its final fortnight however, the Red Devils have been backed to return…

Operating off the left in our transfer rumour team is Joao Felix, reportedly subject of a British transfer record £110m bid from Old Trafford this week.

United have described the speculation as ‘nonsense’, as the club target a forward before the deadline. Felix signed for Atletico Madrid in a £113m deal in 2019, but has struggled to live up to expectations despite his evident talent.

John Murtough had direct contact with Atletico and the answer was negative. pic.twitter.com/BW2VfUWFs3

The 22-year-old has scored 30 goals in 111 games for Atleti, alongside three in 22 caps for Portugal. United have also been linked with Atletico teammates Matheus Cunha and Alvaro Morata.

Robert Lewandowski’s desire for a new challenge alerted Europe’s top clubs this summer, with Manchester United reported to be preparing a ‘stunning offer’ for the Bayern Munich forward in June.

Lewandowski scored a staggering 447 goals during spells at Borussia Dortmund and Bayern, a period which saw the forward win ten Bundesliga titles and finish as the league’s leading scorer on a joint-record seven occasions.

La Liga will be the next destination for his goalscoring genus however, after the 33-year-old turned down alleged interest from England to sign for Barcelona.