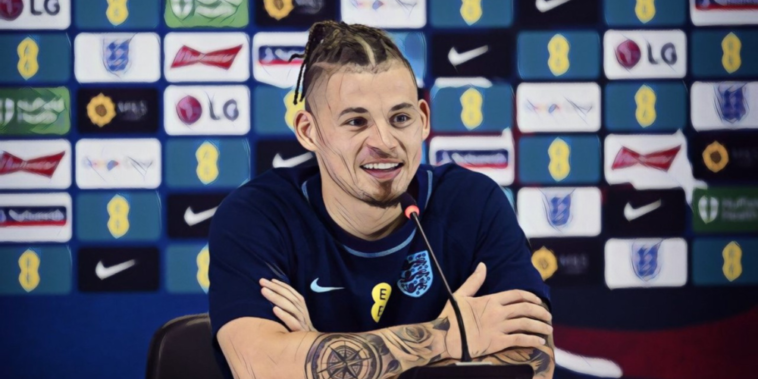 Kalvin Phillips has revealed how England studied how to ‘punish opponents’ following defeat in the Euro 2020 final.

England missed out on a first major tournament success since 1966 after losing to Italy on penalties at the delayed European Championship, having reached a first final since winning the World Cup on home soil more than five decades earlier.

It was the second successive tournament that the Three Lions had reached the latter stages, after making the last four of the 2018 World Cup in Russia.

Phillips has revealed how the squad held discussions following that defeat to Italy, as England look to take the next step and win a major competition. Ahead of this weekend’s World Cup quarter-final with France, the midfielder opened up on how the squad have studied how to improve at both ends of the pitch.

“The next camp, we didn’t go through that game, but we went through how we could become a better team, how we could punish opponents a lot more,” Phillips said.

“You look at the results at this World Cup and how well we’ve done, and it feels like we have taken it on board and that we are learning to become a better team, a more attacking team, and very solid defensively.

“We just spoke about every team that has won a major tournament in the last ten or so years, how good their defensive record has been and how clinical they have been at the other end of the pitch.

“We went through so many different teams, even club teams; the average number of goals they have conceded in a season or a tournament, and we want to better that. If we can get those numbers there’s no reason why we can’t go all the way and win the World Cup.”

England have faced criticism for the calibre of opposition during their runs to the latter stages of the past two tournament’s but Phillips has rejected the notion that Gareth Southgate’s side struggle to beat big-name nations.

“Obviously we lost out against Italy but it was penalties so it could have gone either way,” Phillips, 27, said. “I believe that we are stronger as a group, we are a lot better now going forward and defensively.

“The confidence is running through us and we are very confident to go out in the next few days and hopefully try to beat France.”