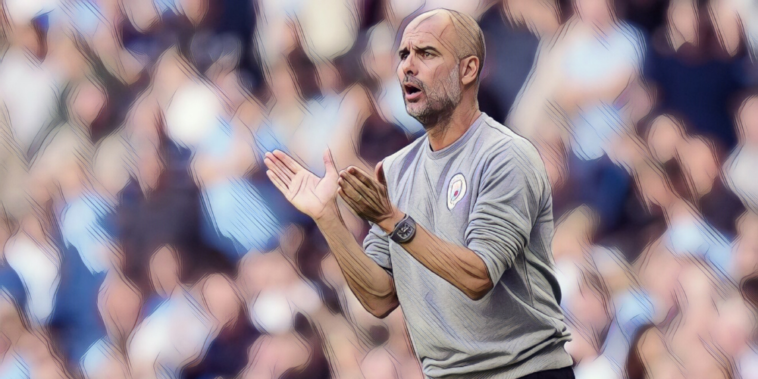 Manchester City’s next three fixtures could quite reasonably alter the narrative of their entire campaign.

The last of the late summer sun has just left Manchester as September prepares to roll into October, but if there can be a defining week this early into the season then this is surely it for Pep Guardiola and his side.

There can hardly be a more daunting run of fixtures anywhere across European football right now. Chelsea. Paris Saint-Germain. Liverpool. Each away from the comforts of the Premier League champion’s Etihad home.

City’s season has yet to click truly into gear after cruising to the Premier League title last season, with last weekend’s goalless draw with Southampton having left the holders adrift of the campaign’s early front runners.

There is already little room for error ahead of three crucial contests.

Chelsea continue to go from strength to strength under the guidance of Thomas Tuchel, their impenetrable defence having now mustered more clean sheets than goals conceded in total since the German’s arrival as head coach in January.

Romelu Lukaku’s arrival from Inter Milan has only enhanced the reigning European champions, whilst Liverpool – depleted defensive options replenished over the course of the summer – are back and look strong, having maintained identical pace with the league leaders from West London.

Even Manchester United continue to ride the wave of optimism that has surrounded Old Trafford, the arrival of Cristiano Ronaldo having increased hopes of a return to former glories across the city and momentarily allowed fans to forget the sins of their much-maligned ownership.

Saturday evening brings the first instalment of what will be a fascinating trilogy and a trip to face Chelsea at Stamford Bridge for City and Guardiola, with Thomas Tuchel having outwitted and outsmarted his opposite number in the three previous battles between the bosses.

Defeats in the FA Cup semi-final and league were disappointing, but the club’s loss in a maiden Champions League final will rankle most and Guardiola must find a way to navigate the German’s well-oiled West London machine.

City’s pursuit of a centre-forward during the summer was perhaps designed with games of this ilk in mind, but a protracted pursuit of Harry Kane failed to materialise in a deal and internal solutions will need to be found.

Ferran Torres and Raheem Sterling have led the line in recent weeks, but can either produce the defining moment in clashes where chances are at a premium?

City could also conceivably be without Ilkay Gündogan, Rodri, Aymeric Laporte, John Stones and Oleksandr Zinchenko for a crucial period in their season, each facing races to prove their fitness ahead of a potentially defining eight-day spell.

The losses of Stones and Laporte could provide Nathan Ake with an opportunity to partner Ruben Dias, but the once much-coveted Dutchman has so far, albeit with minimal opportunity, failed to find his feet in City colours.

The visit to Chelsea is followed by a flight to France to face Paris Saint-Germain, the bookmakers’ favourites alongside Guardiola’s side to win the Champions League this season.

PSG have problems of their own with marquee arrival Lionel Messi a doubt for the clash at the Parc des Princes, but a team boasting Neymar and Kylian Mbappe has the firepower to dismantle any side.

The Parisians drew their opening fixture in disappointing fashion to Club Brugge and a win for City – repeating last season’s semi-final success – would provide clear daylight in the race to top the group, whilst defeat would hand the initiative to Mauricio Pochettino’s side.

Anfield awaits in the third fixture of City’s challenging run, with the setting set to be significantly different to when Guardiola’s side ended their hoo-doo on Merseyside with an emphatic 4-1 win last term.

The two teams have shared an increasing rivalry as direct competitors in recent campaigns and the return of supporters to stadiums promises to make the trip to Liverpool a vastly more daunting prospect than the lifeless scene of last season’s success.

Tuesday night’s win over Wycombe proved a pleasing performance as Guardiola handed debuts to six teenage academy graduates, with a seventh in Cole Palmer netting his first goal for the club in fine fashion.

Navigating third tier promotion hopefuls with a rotated side is one thing, but can Guardiola now secure the results his side need given his depleted options?

The Spaniard has been accused of overthinking and complicating the biggest games during his time at the Etihad, the sentiment particularly true of European eliminations against sides City have been expected to beat.

The champion’s mounting injuries will raise concerns amongst supporters over potential risk and tactical tweaks, in a week in which Guardiola can ill-afford to gamble.

Insipid showings against Tottenham and Southampton have exposed chinks in City’s armour so far this season, whilst even the madcap win against RB Leipzig showcased the best and worst of this side.

City remain favourites to defend the Premier League this season and are arguably the leading contenders in Europe too, but this upcoming period will test their credentials more than ever before.