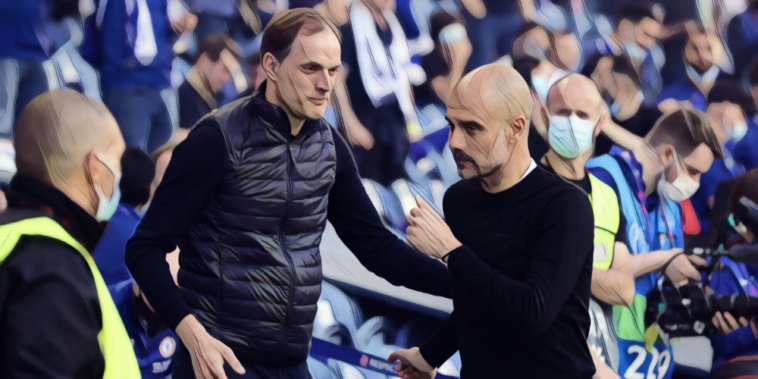 Manchester United and Liverpool will hope to continue their strong starts against Aston Villa and Brentford respectively, whilst Arsenal meet Spurs as North London rivalries are resumed at the Emirates on Sunday.

Does Tuchel have Guardiola’s number?

Chelsea’s clash with Manchester City could have major repercussions on the title race, with the former hoping to underline their credentials with a positive result against the champions.

Thomas Tuchel has had an extraordinary impact since arriving at Stamford Bridge in January, including getting the better of this weekend’s opponents on three occasions.

Three times the two managers have locked horns in 2021 so far, with Chelsea emerging victorious on each occasion, including in the Champions League final meeting between the sides as Pep Guardiola’s dream of winning club football’s biggest prize with City was extended.

Thomas Tuchel said this when he joined Chelsea in January.

Chelsea have been brilliant defensively under Tuchel, registering more clean sheets (15) than goals conceded in the Premier League (14) under the German’s management.

Guardiola’s gamble to field a side without a recognised holding midfielder in the Champions League final backfired as N’Golo Kante dominated in the Chelsea engine room, and the Spaniard’s task is to now find a way through Tuchel’s resolute and confident side.

No room for error for Solskjaer as Man United face Villa

Manchester United are level on points with both Chelsea and Liverpool following an impressive start to their league season, but the positivity of their Premier League performances has been dampened by disappointments in cup competition.

Defeats to Young Boys in the Champions League and a midweek Carabao Cup exit to West Ham have exposed the flaws in Solskjaer’s squad, the second string having failed to grasp the opportunities granted to them so far this season.

United’s lack of a trusted defensive midfielder has been well-documented, but Solskjaer has little room for trial and error in his search for balance in the Premier League, with the Red Devils’ title rivals in ominous form so far.

Whilst both Demarai Gray and Andros Townsend have looked like shrewd signings so far this season, deadline day arrival Salomon Rondon has underwhelmed as he seeks to get up to speed.

The Venezuelan was widely criticised following the Toffees’ Carabao Cup exit in midweek, with the forward looking off the pace before being substituted after 73 minutes.

Rondon is expected to be given another chance to lead the line in the continued absence of Dominic Calvert-Lewin this weekend and a clash against Norwich provides the perfect opportunity to win over his new supporters.

Norwich have been dire defensively this season with their 14 goals conceded the most in the division, the clash against Canaries giving Rondon a chance to silence his doubters.

Having finished the season in fine fashion with four successive wins, Leeds have began the new campaign dreadfully with just two points from their opening five fixtures.

Whilst Marcelo Bielsa’s side often provide elite entertainment, their defensive statistics are once again amongst the poorest in the division with Leeds having conceded the most shots, shots inside the box, shots on target and ranking fourth for big chances conceded.

This week’s opponents West Ham rank fourth for goals scored this season (11 – the same as Man City) and will be boosted by the return of Michail Antonio following suspension.

With both sides better offensively than defensively so far this season, this could prove a cracker.

Salah chasing another record at Brentford

Mohamed Salah’s four seasons at Liverpool have seen him score 99 league goals in 150 appearances, win two Golden Boots, finish as runner-up on another occasion and fail to reach 20+ goals just once – a 2018/19 season in which he managed only 19.

The numbers truly are astonishing for the Egyptian, who if he scores against Brentford this weekend will become the fastest Liverpool player in history to reach a century of league goals for the club, eclipsing the 152-game landmark of Roger Hunt.

He joined the Premier League’s ‘100 club’ after scoring his fourth of the season last time out and the league’s leading scorer is now just four short of moving past Didier Drogba as the highest-scoring African player in the division’s history – despite playing 91 games less than the Ivorian to date.

Since his @LFC debut, Mohamed Salah has had 134 goal involvements in the #PL, at least 24 more than any other player

Make no mistake, Salah is a modern day Liverpool legend and the sooner the uncertainty surrounding a new contract is sorted the better for all those involved at Anfield.

Have Leicester missed their chance to gatecrash England’s elite?

Brendan Rodgers’ side have agonisingly missed out on Champions League football in each of the past two seasons, falling out of the top four on the final day in successive campaigns.

Defeat to Tottenham last season saw the Foxes fall out of the top four despite spending 68 of the previous 71 weeks in the Champions League places, and their poor start to the new campaign has seen the established elite build a lead that will be difficult to claw back.

Leicester have lost three of their opening five and are currently six points adrift of the top four, a win against struggling Burnley this weekend vital as the Foxes look to breathe new life into an underwhelming season so far.

Sarr vs Saint-Maximin in battle of the Premier League flyers

Watford face Newcastle at Vicarage Road this weekend, a fixture both sides will feel is winnable in their respective battles to secure safety.

What could shape as a potential relegation ‘six-pointer’ could be illuminated by two of the Premier League’s most entertaining players at present, as speedsters Ismaila Sarr and Allan Saint-Maximin come face-to-face.

Sarr has been the shining light of the Watford side since promotion with three goals in five appearances, his performances having done little to quieten rumours of interest from the likes of Liverpool and Manchester United.

Saint-Maximin is another player who could attract transfer interest having starred for Newcastle so far this season, scoring twice and providing two assists for Steve Bruce’s side.

The Gucci Garrincha. The Headband Hagi. The Bandana Beckham. The Sweatband Stoichkov.

Both players will be looked to to be the difference during this weekend’s clash and their individual performances could go a long way to determining the result.

North London derby could be a low scoring affair

Spurs supporters were quick to laugh at the misfortune of their north London rivals at the same stage, as Arsenal sat rooted to the bottom of the Premier League without a point or goal scored.

Since then, Spurs have lost successive matches without scoring, whilst Arsenal have had a mini-revival with back-to-back wins and successive shut-outs.

Mikel Arteta’s side could even move above Spurs with a victory of two or more goals at the Emirates this weekend, with the task of counterpart Nuno Espirito Santo to stop the rot.

Both sides have struggled for goals during the opening weeks of the new campaign, their combined haul of just five goals a key reason behind their faltering fortunes.