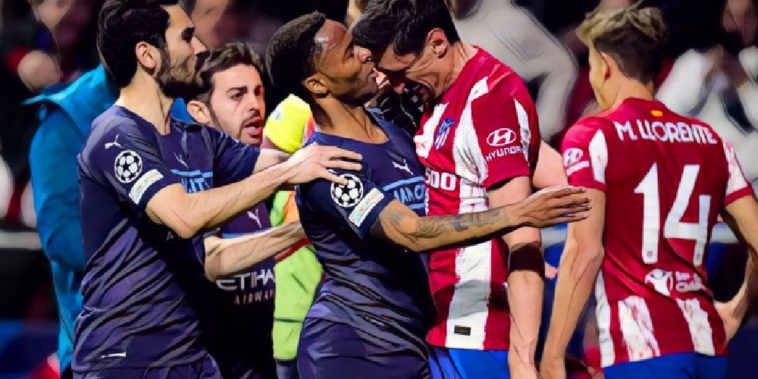 Manchester City progressed to the Champions League semi-final after securing a hard fought 0-0 against Atletico Madrid in the Spanish capital.

Pep Guardiola’s side came into the game 1-0 up from the reverse fixture at the Etihad last week and the second leg encounter was a carbon copy of the previous match during the opening half with Man City dominating territory and possession. İlkay Gundogan had the best of the chances during the opening 45 minutes, but the Germany international could only hit the post from eight yards out.

Diego Simeone’s side emerged for the second-half a different beast, pressing high and putting the City defence under pressure with direct balls into their front men. Despite being roared on by a passionate home support and putting in a huge effort physically, Atletico lacked composure in the final third and struggled to create much in the way of clear cut chances.

The game descended into a farce as it approached the 90th minute when Brazilian defender Felipe was shown a second yellow for a unnecessary challenge on Phil Foden. Former City centre-back Stefan Savic was also shown a yellow for trying to drag Foden off the pitch after the young Englishman had cheekily rolled back inside the touch line and the Montenegro international then appeared to headbutt Raheem Sterling in the resulting melee.

As the game ticked past the 100th-minute mark, Atletico finally got the golden opportunity they had craved, but substitute Angel Correa could only fire a tame effort straight at Ederson after finding himself clean through on goal.

City will now face Chelsea’s conquerers Real Madrid in the semi-final and speaking afterwards Guardiola reckoned his side deserved to qualify over the two legs.

“It is the champion of Spain and they played with energy and in second half were better than us and we were lucky we didn’t concede,” Guardiola told Sky Sports.

”In the first half we had chances, overall we are in the semi-finals – it is well deserved.

“The opponent is so tough, all the teams in Champions League come here and suffer so it is important we go through.”

There is no respite for City with the defending Premier League champions playing Liverpool in a mouthwatering FA Cup semi-final on Saturday. City lost both Kevin De Bruyne and Kyle Walker to injury during the game and Guardiola admitted his squad his struggling with injuries ahead of the seasons run in.

“We are in big trouble, so we can’t forget we played three days ago, travelled, come here, have a lot of injuries now and I don’t know what will happen in the next weeks but today we celebrate because it is the third time in Manchester City’s history we are in the Champions League semi-finals,” Pep continued.

“We cannot play all the time and score four or five goals, we are human beings – we come from a difficult game against Liverpool.”