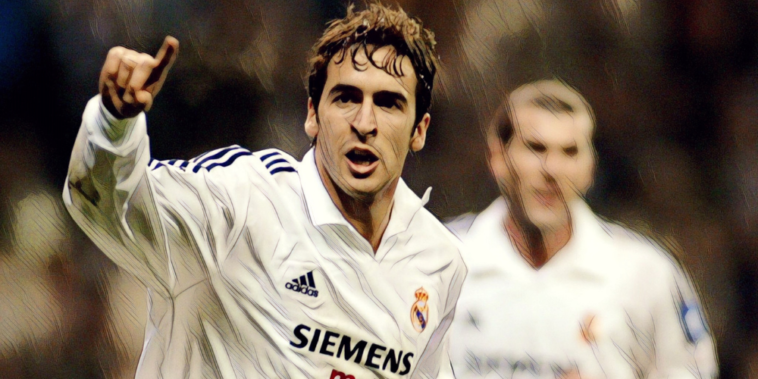 Expectations and pressure weigh heavier at Real Madrid than almost any other football club. The famous all-white colours, rich heritage and relentless demand for success, the Bernabeu is an environment where only the greats make a truly lasting impression.

For almost two decades, Raúl González Blanco was the visual representation of a footballing superpower, the Madridista with magic in his feet who embodied his people and became the symbol of the Spanish side.

Raúl’s contribution to the cause will last the test of time, but it was fate and ill-judgement that first guided the precocious forward towards Spain’s most celebrated club.

Raúl had been a part of Atletico Madrid’s youth system when the club’s former president, Jesus Gil, made a decision that would change the course of history in the capital, closing the youth system in a bid to cut costs and allowing the budding talent to cross the Madrid divide.

It took little time before Raúl proved Atletico wrong, scoring prolifically for Real’s youth sides to progress to the first-team within a matter of months.

He became Los Blancos’ youngest ever debutant for a short time following a bright performance against Real Zaragoza, before marking his second appearance with a goal and assist in a 4-2 derby success against Atletico Madrid.

From the moment he took to the pitch in a Real Madrid shirt the forward belonged, possessing an innate self-confidence in his quality and the finesse of a player several seasons his senior.

He was named as La Liga’s Breakthrough Player in 1994/95 after helping Real end Barcelona’s four-season stranglehold on the title, before exploding the following campaign to score 26 goals in all competitions.

It was that season where Raul first made his mark on the Champions League, scoring six goals in eight appearances in a competition that would come to define him.

That haul included a hat-trick against Ferencváros, the teenager marking only his third appearance in the competition by becoming the youngest treble scorer in Champions League history, his record – aged just 18 years and 114 days – still standing almost three decades later.

Real’s run was ended in the quarter-finals by eventual champions Juventus, despite Raúl handing the Spaniards a first-leg advantage with the only goal of the game on home soil.

Raùl had risen from the ranks rapidly to become the hometown hero of the club’s fanatical fanbase, each revelling in watching one of their own bring both endeavour and elegance to the Bernabeu stage.

For those fans, success in Europe matters above all else.

Since a dominant run in winning the first five editions of the European Cup, Real had added just one further title to their collection. Without success in Europe since 1966, the barren run was the narrative as the side progressed with cautious optimism through the 1997/98 campaign.

Real’s form in continental competition juxtaposed their disappointing domestic campaign, eliminating Bayer Leverkusen and Borussia Dortmund in the knockout stages to set up a final meeting with Juventus, the Italians experienced on this stage and into a third successive showpiece.

Underdogs for the clash in Amsterdam, Raúl started in a deeper role behind a front pairing of Fernando Morientes and Predrag Mijatović, the latter scoring the decisive goal as Real’s long wait was ended.

Two seasons later and Real were back in the final, with Raúl – injury having disrupted his campaign two seasons earlier – outstanding in Europe, scoring twice in devastating fashion as holders Manchester United were eliminated in the last eight.

He scored again in the final as Valencia were beaten in Paris, racing away on the counter-attack to score the clincher in a 3-0 success for Real, finishing as the Champions League’s leading scorer with 10 goals in just 15 appearances.

Real’s successes in Europe came despite a turbulent period off the pitch for the club, amid managerial upheaval and a toxicity within the dressing room, Raúl having famously warned incoming arrival Steve McManaman of the problems at the Bernabeu just a year before that win over Valencia.

“The dressing room is a cesspit of lies, treachery and whispers. I feel sorry for new players like Steve McManaman coming into the club. If McManaman thinks he is coming to one of the world’s top clubs, then he has made a big mistake.”

Raúl, so often the voice of the fans and the footballing figurehead for the Madridistas, was soon faced with another challenge, as the presidential arrival of Florentino Perez brought sweeping changes.

In came the Galacticos, four Ballon d’Or winners and David Beckham signed within the space of four summers, a transfer strategy that threatened the balance both on and off the pitch.

Raúl added a third Champions League winners’ medal at the end of the 2001/02 campaign, scoring a stunning effort in the semi-finals against Barcelona, becoming the first player to score in two finals as Bayer Leverkusen were beaten at Hampden Park.

It was a quintessential goal from the Spanish striker, his sharpness in movement catching the Leverkusen defence off-guard as he latched onto Roberto Carlos’ quick throw-in to roll beyond Hans-Jörg Butt.

His movement and timing was often immaculate. Whether ghosting from the defender’s gaze at the exact right moment, or reacting quickest to a loose ball, around goal Raúl was often in a league of his own.

Not blessed with elite natural gifts, his intelligence and application ensured he became one of the greatest goalscorers of a generation and one of the most remarkable Real Madrid players of all time.

Fernando Hierro once said of his former teammate that Raùl was “not a 10 out of 10 in anything” but instead “an eight-and-a-half in everything.”

Raúl is amongst the greatest footballers Spain has produced, even if his time with the national team coincided with a team tagged as perennial underachievers, a generation’s reputation for La Roja tainted further following the wealth of success that followed in the immediate aftermath of Raúl’s retirement from national duty.

He retired as Spain’s all-time record goalscorer with 44 goals, a figure since eclipsed by David Villa, though success in major tournaments proved elusive with his last-minute missed penalty against France leading to elimination at Euro 2000.

He was a great player in a team of unfulfilled potential, but back at club level Raúl continued to write his legend.

Even as the marquee arrivals came and went at the Bernabeu, he remained the spirited leader of the Spanish giants, a player who gave the proverbial blood, sweat and tears in the quest for success in the capital.

The trophies continued to come and the goals flowed at a rapid rate, his 323 goals in 741 appearances a Real Madrid record until the arrival of Cristiano Ronaldo, the man who inherited his fabled number seven shirt.

Twice he finished as the leading scorer in La Liga and was named as runner-up for the Ballon d’Or in 2001, his career passing without the recognition of Europe’s greatest individual honour deemed a travesty by the Real Madrid support.

Six league titles and three Champions League winners’ medal were among the many team honours accumulated, but as his legs aged and his role diminished towards the end of the 2000s, a fierce competitor wanted more than to be amongst the supporting cast.

Schalke came calling for a modern great and across two seasons Raúl left his own indelible mark in Gelsenkirchen, rolling back the years to score 40 goals in 98 games for the Bundesliga side.

That haul included raising his Champions League tally to 71 goals, a competition record which stood until the all-time greats of Ronaldo and Lionel Messi condemned even extraordinary feats to afterthoughts.

Ventures to Al Sadd and New York Cosmos wound down the career of a nineties icon, but it is for the relenting service to Real Madrid that most will remember Raúl.

Insatiable in his pursuit of goals and success, Raúl was captivatingly clinical and often came alive on the grandest stages of all.