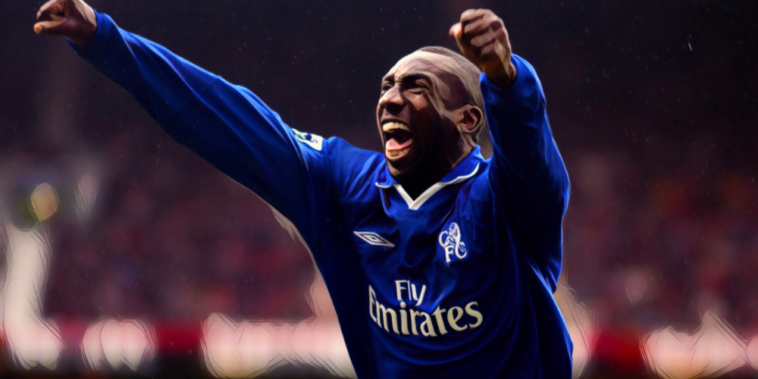 During a career which saw his best seasons spent in the Premier League, Jimmy Floyd Hasselbaink hammered balls towards wincing goalkeepers with intimidating intent.

Hasselbaink was a wonderful watch at his best, scoring goals of thudding power as one of the most menacing Premier League centre-forwards of his era.

His rise to Premier League prominence had been difficult, with the Suriname-born striker having admitted that football had ‘saved’ him from taking darker paths amid an upbringing on the challenging streets of Zaandam.

Wrong turns awaited on almost every corner of the city just north of Amsterdam and Hasselbaink – who spent three months at a youth detention facility after his gang had stolen tickets outside a concert – became involved in crime-led culture, before a talent with the ball at his feet placed him on a path towards sporting success.

His career began with spells at Telstar and AZ Alkmaar, before his big break came following a move to Portugal. Two seasons, one each with Campomaiorense and Boavista, turned the heads of Premier League teams and Leeds completed a £2m deal to sign the forward in 1997.

George Graham’s team had struggled for goals the previous season but in Hasselbaink had found the ideal solution, a centre-forward who bullied backlines with his powerful frame and feet which resembled shotguns when he unleashed at goal.

Graham’s authoritarian approach proved a fine match for Hasselbaink, a personality that had crossed lines in his youth falling into place under the harsh measures of the Leeds boss.

“He was very hard on me,” Hasselbaink told the Independent. “He used to get on to me about everything; me not working hard, me not running in the channels. And yes, at times, I thought, ‘Hell, he hates me. What does he want?’

“In those early years, I needed someone to be hard on me. George was, really hard. It was not always fair, but it made you realise that you had to play well every match. It’s only afterwards, as you get older, and he’s gone, and you experience other managers, you knew George was right.”

Graham’s gamble on the unproven Dutchman proved a masterstroke, following a brief bedding-in period at Elland Road. Hasselbaink scored on his debut against Arsenal, but the goals failed to flow freely and he netted just five before Christmas.

Following the festive period however, Hasselbaink found his groove. He ended the season with 22 goals in all competitions as Leeds finished fifth, securing a place in the UEFA Cup in the process.

Hasselbaink hit 18 league goals the following season as Leeds climbed to fourth, a figure which earned the forward a share of the Premier League’s Golden Boot alongside Michael Owen and Dwight Yorke.

A firm fans’ favourite in West Yorkshire, his star status soon turned sour as he became embroiled in an ugly contract stand-off. David O’Leary has replaced Graham as manager and was critical of the player’s conduct in negotiations.

“I’m not surprised that people are calling him a greedy son of a bitch,” O’Leary was quoted as saying at the time, as per the Irish Times.

“He keeps on peeling off from the rest of the players in training and asking me why I won’t pay him what he wants or sell him. I’m sick to death of it.”

Hasselbaink’s version of events differed, but the result was an acrimonious exit and a £10m move to Atletico Madrid. New surroundings arrived in Spain, but on the pitch it was the same Jimmy Floyd.

He scored 33 goals in all competitions during an electric individual season in Madrid, including a brace as Atletico won at Real Madrid for the first time in almost a decade.

The Dutchman’s prolific run of form was not enough to save Atletico – who also reached the Copa del Rey final – from relegation however, and after one season in La Liga he was on the move again.

Chelsea came calling and wrote a cheque worth £15m to bring Hasselbaink back to the Premier League, matching the divisional record that took Alan Shearer from Blackburn to Newcastle.

His first game for the West Londoners ended with a goal and silverware as Manchester United were beaten in the 2000 Charity Shield, though the club’s league season began poorly with one win from seven.

Gianluca Vialli was sacked as manager and replaced with Claudio Ranieri, who reunited with Hasselbaink after resigning as Atletico Madrid manager during the club’s relegation campaign the previous season.

The turnaround in fortunes began with a thrilling 3-3 draw at Manchester United in September, a clash that re-introduced Premier League fans to the Hasselbaink trademark of hitting a football with phenomenal power.

Tore Andre Flo’s outstretched leg kept alive a Graeme Le Saux cross, hooking the ball to the edge of the area where Hasselbaink lay in wait.

His first touch cushioned the ball on his chest, before unleashing a special strike into the top corner to open the scoring and stun Old Trafford.

It was a goal that captured the best of Hasselbaink, a forward whose ferocious shot power often made even the best Premier League goalkeepers feel inadequate.

From there Hasselbaink continued to fire. He scored four goals in a 6-1 thrashing of Coventry the following month, before netting a double to down London rivals Tottenham.

The 2000/01 season ended with Hasselbaink as the league’s leading scorer, becoming just the second player, after Alan Shearer, to win the Premier League’s Golden Boot with different clubs.

Hasselbaink had emerged as Chelsea’s chief source of goals, but in 2001/02 was provided superb support from Eidur Gudjohnsen.

Gudjohnsen had arrived alongside Hasselbaink the previous season but took time to make an impression, before becoming a prominent part of a partnership that was dubbed ‘Fire and Ice’.

The Icelandic forward’s creative composure and Hasselbaink’s hard-hitting style became a perfect Premier League marriage and the duo combined for 52 goals across the 2001/02 campaign.

Hasselbaink’s highlight was a hat-trick in a 4-0 thrashing of Tottenham at Stamford Bridge, a perfect treble of right foot, left foot and head to put the club’s capital rivals to the sword.

Hasselbaink’s output dropped the following season, but a return of 15 goals was a more than respectable total and one that contributed to Champions League qualification.

Chelsea’s place in Europe’s elite competition – secured in a winner-takes-all shootout with Liverpool on the final day – paved the way for Roman Abramovich’s transformative takeover at Stamford Bridge.

Despite the marquee arrivals of Hernan Crespo and Adrian Mutu, Hasselbaink chose to remain at Chelsea and impressed to outscore the big-money buys and finish as the Blues’ leading scorer for a third time in four seasons.

Crespo and Mutu represented the fresh new toys in the Russian owner’s regime, but one of the oldest in the box remained a favourite of the Stamford Bridge faithful.

The 2003/04 season proved Hasselbaink’s last with the club, as further investment and the signing of Didier Drogba led to his free transfer exit to Middlesbrough.

The 32-year-old proved an astute signing for a Boro side who had secured UEFA Cup qualification and he soon became a popular figure in the North-East.

He netted the club’s first-ever European goal during a 3-0 win over Banik Ostrava at the Riverside and ended his maiden campaign as Middlesbrough’s leading scorer with 16 goals in all competitions.

Forming a fine understanding with fellow arrival and ex-Leeds forward Mark Viduka, the experienced duo spearheaded a memorable period for Middlesbrough who punched above their weight in Europe.

Hasselbaink was instrumental in the club’s run to the 2006 UEFA Cup final, netting crucial goals against Stuttgart, Roma and FC Basel in an unforgettable journey to a European showpiece.

The final – a 4-0 defeat to Sevilla – proved his final fixture with the club as Hasselbaink departed with a record of 34 goals in 89 games.

His career wound down with short spells at Charlton and Cardiff, reaching the FA Cup final with the latter before hanging up the boots that had bludgeoned many a Premier League football.

At his best Hasselbaink was among the finest forwards in European football, one who made the most difficult aspect of the game simple and straightforward.

Goalkeepers were often rendered meaningless when Jimmy Floyd lined one up, a noughties nine whose finishing was thrillingly emphatic.