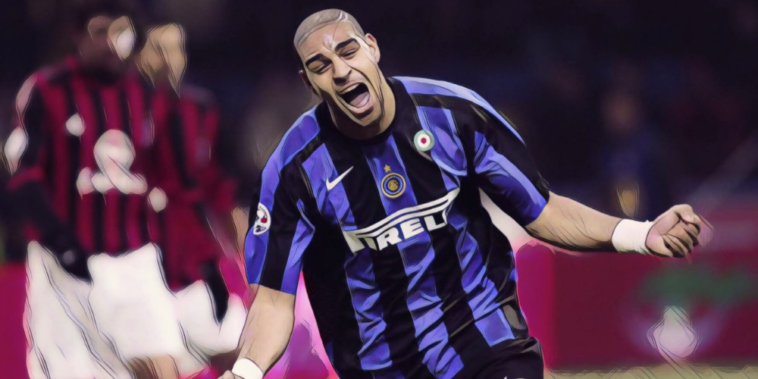 A sense of what might have been will always be associated with the tale of Adriano, a footballer of extraordinary talent who failed to fulfil his true potential.

Adriano’s best was short but spectacular, the Brazilian as complete a centre-forward as the modern era has produced. A powerhouse in every sense of the word, he had been dubbed the heir apparent to Ronaldo with the national side and the next iconic Selecao striker.

Adriano had risen from challenging beginnings, born into the economic struggle of Rio de Janeiro’s Vila Cruzeiro favela. Sport has often been an escapism from South American societal difficulties, though football was not alone in providing a distraction with crime, corruption, and drugs prevalent.

Fortunately for Adriano he chose an initial path of pursuing football and signed for Flamengo, breaking into the senior side as a teenager.

Far from overawed at his exposure to first-team football he flourished, scoring 11 goals in all competitions across his first season.

Despite his inexperience he was a brutish force of natural strength and skill and as the goals arrived so did the inevitable comparisons to Ronaldo Nazario, the world’s finest footballer and the benchmark for Brazil’s best prospects.

European interest soon arrived and it was Inter Milan who secured his signing, in a complicated deal that saw Fiorentina and Parma take co-ownership of the forward between 2002 and 2004.

After an initial loan spell in Florence, he made his big breakthrough at Parma.

Adriano arrived at a Parma side requiring a rebuild, having seen stars of the previous era – including Gianluigi Buffon, Lilian Thuram, Fabio Cannavaro and leading scorer Marco Di Vaio – depart for divisional rivals.

Alongside the similarly talented but troubled Adrian Mutu and Hidetoshi Nakata he formed an exciting forward line and soon began to demonstrate his tantalising talent, scoring three goals in his first three appearances.

He ended the season with 17 in all competitions, with Mutu hitting 23 goals of his own as the duo finished second and third, behind Christian Vieri, in the race for the Capocannoniere.

Adriano returned to Inter Milan in 2004 and it was in the colours of the Nerazzurri that he reached his brilliant best.

That summer saw Adriano star for the Selecao as his flame burned bright for the national side, taking the Copa America by storm.

Brazil had left out the lead figures from their World Cup winning squad in 2002, opting for a youthful selection as the nation built towards a defence of the trophy in Germany.

Adriano’s audition for a regular role could hardly have been better, scoring a hat-trick against Costa Rica in the group stage on his way to winning the tournament’s Golden Boot and Best Player awards.

In the knockout rounds he proved equally decisive, scoring in each game as Brazil reached the final. The attributes of Adriano’s game were on show as South America’s best collided, as he dismantled defences with power, pace and an explosive left foot that turned footballs into heat-seeking missiles.

Two goals and an assist in the quarter-final win over Mexico was followed with a semi-final strike against Uruguay, before his most crucial moment came in the final as a 93rd-minute equaliser forced a shootout.

He converted the first as eternal rivals Argentina were beaten on penalties at the Estadio Nacional in Lima, with the forward shining in the famous yellow colours of the national side.

Adriano’s impact had been incredible, but sadly, it would be the zenith of his career. What had promised to be the launchpad to legendary status instead became a reminder of the limitless potential that was regrettably never fulfilled.

Adriano scored 28 goals in all competitions the following season as Inter won the Scudetto and, at that time, had an argument as the best forward in world football.

He was capable of all manner of goals, though it was spectacular strikes – rather then subtly – that became his trademark. Adriano’s ferocious finishing was feared across Serie A, with defenders unable to prevent the predictable shift onto his left foot and thunderous drives from distance.

In 2005 he again starred as Brazil won the Confederations Cup, claiming the Golden Boot and Best Player awards at another international tournament, despite the inclusion of senior Selecao stars in Germany.

His haul included two goals in the 4-1 final thrashing of Argentina, as Brazil outlined their intent ahead of the World Cup the following summer.

However, the tragic news of his father’s passing soon after the 2004 Copa America final, aged just 44, had began the start of a slow decline.

Adriano’s unstoppable natural talent could carry him only so far and darker distractions away from the game, including a penchant for partying and alcohol addiction, began to emerge.

“I don’t really want to talk about it, but I will tell you that after that day, my love for football was never the same.

His teammates tried and failed to arrest his demise. Ivan Cordoba had likened Adriano as a ‘mix of Ronaldo and Zlatan Ibrahimovic’ and in an interview with Inter Milan stadium announcer Mirko Mengozzi, stated his belief that his former teammate could have been a Ballon d’Or winner.

“He had devastating power. Adriano had tremendous strength and shooting ability, he had other skills that I think could have won him the Ballon d’Or.”

He was included in Brazil’s squad for the 2006 World Cup, but a tournament which had been predicted to be the defining moment in Adriano’s career instead proved underwhelming. He scored twice in the group stage, but Brazil bowed out to France in the quarter-finals.

Adriano’s career spiralled downwards as he struggled to find focus. Bereavement had brought on mental demons, as he battled a fragile psyche that belied the formidable frame that had swatted aside centre-backs on his path to success.

Back in Brazil, first with Sao Paulo and then Flamengo, there were flashes of form but on each occasion it proved fleeting.

He scored 19 goals as Flamengo won a first Campeonato Brasileiro Série A in 17 years in 2009, a brief time in which the forward remembered he ‘felt like Adriano again’.

However, his homeland only provided further distractions to his sporting career, as members of his inner circle – ones who had taken more troublesome routes from the favelas – contributed to a lack of discipline and increasingly erratic behaviour.

He later endured a miserable return to Italy at Roma, before making a handful of appearances for Corinthians, Athletico Paranaense and Miami United, each failing to reignite he forward’s flame.

Memories of Adriano remain vivid, a footballer whose vices prevented him reaching the heights expected. It’s almost impossible to recall the short-lived tale of a fantastic but flawed footballer, without mention of his computer-generated avatar in Pro Evolution Soccer 6.

Avid fans of PES will recall Adriano as the franchise’s finest footballer, his attributes supercharged – including an unprecedented 99 shot power – during a season in which Brazil’s brightest emerging talent was chosen as the game’s cover star.

Adriano’s best, in truth, was akin to watching a PlayStation footballer in the flesh. Each attribute greater than the opposition often left in his unstoppable wake.

Nicknamed L’Imperatore (the Emperor) by the Italian media, he was robust and remarkable, possessing a strike of pure power that has ensured his legacy lives on.

We’ll never know how high his ceiling truly was, but the best of Adriano – the Emperor who so sadly lost his groove – was breathtakingly brilliant.