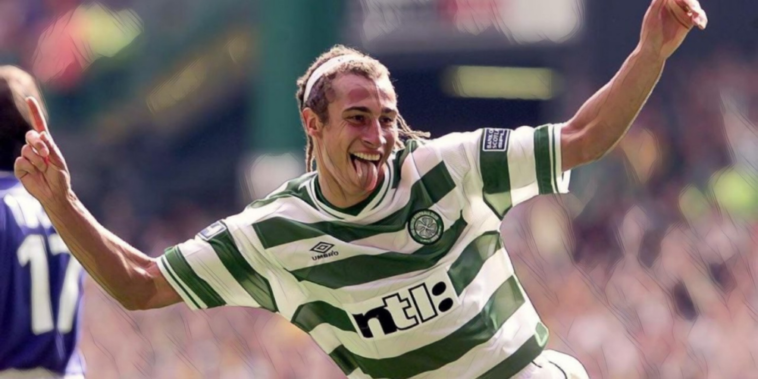 Henrik Larsson was immortalised as ‘The King of Kings’ during an unforgettable career at Celtic, one in which the goals flowed freely and trophy after trophy arrived at Parkhead.

Larsson’s contribution to the Celtic cause etched his name into the fabric of a unique institution, an elite goalscorer who turned down overtures from Europe’s elite to spend the best seasons of his career with The Bhoys.

Celtic have had no shortage of club legends, but there remains a special place in the affections for Larsson, the club’s King of Kings and one of the most formidable forwards of the noughties.

Larsson’s rise to anointed Glaswegian royalty took time and it was not until his mid-twenties that he would arrive in Scotland, having spent the formative seasons of his career in his native Sweden before an indifferent spell in the Netherlands.

Having made an impression with Högaborgs BK in Sweden’s lower leagues, he signed for Helsingborg in 1992, becoming a full-time professional at his hometown club.

From the offset it became clear Helsingborg had signed a talent destined for bigger things, as Larsson’s goals – 51 in 61 appearances across two seasons – fired the side into the top division after a more than two decade absence.

Feyenoord came calling and secured the striker’s signing, but he struggled for form and failed to find a sense of belonging in Rotterdam. A failure to find his best position only added to his frustrations, though successive KNVB Cup triumphs earned Larsson his first career silverware.

The 1994 World Cup saw Larsson feature for a Sweden side who overachieved to finish third, reaching the semi-finals before defeat to eventual winners Brazil.

Larsson scored in the 4-0 win over Bulgaria in the third place play-off as Sweden secured their best finish at a World Cup since losing the 1958 final on home soil.

As the late nineties arrived Larsson requested a move at club level, informing Feyenoord of his desire to leave in search of a new challenge.

He signed for Celtic in a £650,000 deal after winning a legal dispute over a contract clause, arriving at the Scottish side determined to stop bitter rivals Rangers winning a tenth title in succession.

The summer signing started in forgettable fashion, making a mistake as Celtic crashed to defeat a Hibernian on the opening weekend of the season, before scoring an own goal on his European bow.

From there, however, it would be the start of a love-affair between the Swedish star and a partisan Parkhead crowd.

Larsson ended his debut season with 19 goals in all competitions, scoring in the final as Celtic won the Scottish League Cup in November. He ended the campaign as Celtic’s leading scorer, including opening the scoring against St Johnstone on the final day of the season as the championship was secured.

It was a first league title since the 1988 centenary year triumph and ended Rangers’ stranglehold in Scotland.

Larsson had become a fans’ favourite and in 1998/99 he reached new levels, scoring 38 goals in all competitions despite Celtic ending the season without silverware. Two goals in a 5-1 thrashing of Rangers in November increased his growing status, but a stellar individual campaign came without team honours.

His early seasons with Celtic saw much upheaval, including four managers in just three seasons. Wim Jansen, Jozef Vengloš, John Barnes and Kenny Dalglish all took turns in the hot-seat, before the arrival of Martin O’Neill sparked a new era of success.

Larsson had missed the majority of the 1999/2000 campaign after sustaining a broken leg, but returned under the new manager back to his brilliant best.

Following the exit of Mark Viduka to Leeds, Celtic had secured the signing of Chris Sutton during the summer and the £6m arrival from Chelsea proved the perfect foil for the returning Larsson.

Sutton had formed an iconic understanding with Alan Shearer in the Premier League and soon replicated that telepathy with his Scandinavian strike partner,

“Chris Sutton was the best partner I ever had,” Larsson told the Lockdown Tactics Podcast.

A big guy with vision who knew how to play the game. He was totally unselfish. He worked very hard, never stopped running and he could score goals. It was easy to play with him. When he went up for a header, I just had to judge where to run.”

Larsson and Sutton scored a goal each as Celtic began the season with a 2-1 win over Dundee United, before a 6-2 humiliation of Rangers in the club’s fifth game saw the dovetailing duo star.

Each scored a brace as Celtic embarrassed their greatest rivals at Parkhead, racing into a three-goal lead inside 11 minutes in one of the most memorable Old Firm results of the modern era.

Larsson’s first was a moment of magic. Collecting Sutton’s lay-off he charged towards the Rangers backline, evading two challenges before lifting an unstoppable finish into the top corner.

Larsson ended the season with an astonishing 53 goals in 50 appearances across all competitions, his 35 league goals seeing the Swede win the European Golden Boot.

He scored a hat-trick in the League Cup final win over Kilmarnock and two more as Hibernian were beaten in the Scottish Cup final, sealing Celtic’s first domestic treble since 1967.

Celtic retained the title the following season with Larsson again the league’s leading scorer, before the 2002/03 campaign brought an epic European venture.

O’Neill’s side had been beaten in the Champions League qualifiers by Basel on away goals, but dropped into the UEFA Cup.

Larsson began their campaign with a hat-trick as Lithuania’s FK Sūduva were thrashed 8-1 in Glasgow, before another comfortable win in the return secured a tie with Blackburn Rovers.

Larsson’s goal earned Celtic a narrow 1-0 win over the Premier League side in the home leg, before the Swede scored again in the return, with Sutton also netting against his former side to continue the club’s progress.

Celta Vigo – a tie in which Larsson again scored a decisive goal – and Stuttgart were then eliminated to set up a huge all-British showdown with Liverpool.

Gerard Houllier’s side had won the UEFA Cup two seasons earlier and a 1-1 draw in Glasgow made the Reds strong favourites, Larsson scoring the goal on his return from a broken jaw.

Celtic won 2-0 at Anfield in the return to progress and a their place in the final was assured after beating Boavista in the last four, Larsson scoring in both legs against the Portuguese side.

The final proved an enthralling encounter as Celtic took on Jose Mourinho and FC Porto in Seville and it was again Larsson who came to the fore, twice heading in two superb equalisers to force extra-time.

Porto – who would go on to win the Champions League the following season – prevailed 3-2, ending Celtic’s dream. It was Celtic’s most successful run in Europe since their run to European Cup Final in 1970, and the first time in 23 years that they had remained in continental competition beyond Christmas.

Larsson finished the season as the tournament’s second top scorer with 11 goals and netted 44 in all competitions for Celtic, whose European exploits cost the club domestically as the title went to Rangers.

Approaching his 33rd birthday and expected to return to his native Sweden, Larsson instead signed for Barcelona on a free transfer in a move that provided the veteran with an awaited chance at one of Europe’s elite.

He signed an initial one-year deal in Catalonia and saw his first season disrupted with fitness issues, but the Spaniards saw enough to trigger the extension.

It proved a wise move as Larsson scored 15 goals in all competitions, complimenting an all-star cast that included Ronaldinho – a man who named Larsson as his idol – and Samuel Eto’o.

His final contribution was his greatest as he was introduced from the bench with Barcelona trailing in the 2006 Champions League final.

Struggling to break down an Arsenal side reduced to 10 men, Larsson’s arrival turned the game as the Swede created goals for Eto’o and Julian Belletti to crown Barcelona champions of Europe.

He returned to Helsingborg and scored 54 goals in 107 appearances during a second spell with his boyhood side, though there was one final chapter as Manchester United came calling.

The Red Devils signed Larsson on a short-term loan deal as cover during the 2006/07 season. He scored three goals in 13 appearances as Sir Alex Ferguson’s side won the Premier League, adding another league title to the honours won in Scotland and Spain.

Larsson ended his career regarded as one of Sweden’s greatest ever footballers, having scored 37 goals in 106 appearances for the national side.

He was a forward who combined a clinical touch with a selflessness often lacking in number nines, a willing runner with bravery, drive, and determination.

Despite his extraordinary talent, Larsson chose to spend the best seasons of his celebrated career at Celtic and for that the club’s fans will forever be grateful.