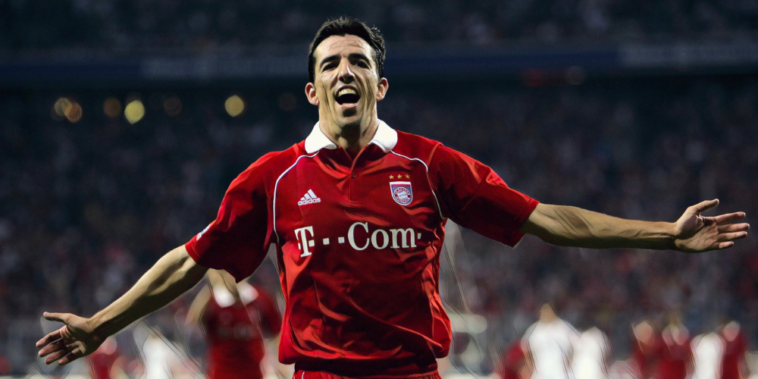 Across four seasons in German football Roy Makaay was known as ‘Das Phantom’, an ode to the forward’s ability to seemingly find goals out of nowhere.

Makaay’s moniker was more than fitting, with his knack for ghosting in behind defenders and an almost supernatural sense of where the chances would fall.

At his best there were few better finishers anywhere in Europe, his game one built on simplicity but ruthless effectiveness around goal. Timing of runs and textbook finishes became the Dutchman’s trademark.

Makaay was born in Wijchen, a town in the eastern part of the Netherlands, and after being rejected during a trial at NEC Nijmegen earned his breakthrough at Vitesse Arnhem.

Overcoming a slow start, he soon began to demonstrate the goalscoring instincts that would define his career, reaching double figures for league goals in consecutive Eredivisie campaigns.

He ended the 1996/97 campaign with 22 goals in all competitions, 19 of which came in the league. With his reputation on the rise, he turned down interest from Dutch football’s traditional powers and made a surprise move away from the Netherlands.

Tenerife was Makaay’s destination of choice, joining an island outfit who were punching above its weight in Spain’s top division. His first season was one of adaptation as he netted just seven goals, before doubling that haul during a second campaign that showed signs of progression.

In demand once again, he moved to the mainland to sign for Deportivo La Coruna. Once more the forward arrived at a team with grand ambitions of upsetting the established order and at the Riazor he found a team equipped to do just that.

It would prove the height of the Galician’s golden era.

Makaay made his mark instantly with a debut hat-trick against Alaves in the season opener and from there failed to look back, providing the cutting edge which the title challenge of ‘Super Depor’ was built upon.

The club’s early season form had been mixed, but a win over defending champions Barcelona kick-started a run of five straight wins, Makaay scoring both goals in a 2-1 win at the Riazor.

Makaay opened the scoring as Real Madrid – who ended the campaign as European champions – were thrashed 5-2 in February, whilst he scored another hat-trick as Atletico were hit for four in April.

Deportivo moved top of the division in week 12 and never relinquished first place, though the scars of past disappointments hung over the club as the season reached its conclusion.

In 1994, Depor had been one kick from winning the league title for the first time. Top of the division on the final day, matching Barcelona’s result would have crowned the club champions.

Awarded a last-minute penalty to secure the title with the game goalless, Miroslav Djukic’s weak effort was saved, a moment which gifted the title to Barcelona on goal difference.

Six seasons later however, there would be no repeat. Makaay ended the season with 22 league goals, including the second as Espanyol were beaten 2-0 to seal the club’s coronation on the final day.

Against all odds, Deportivo had won a maiden title and ended a 15-year period in which the Real Madrid and Barcelona duopoly had been broken just once.

“It’s the best moment (of my career), Makaay reflected to ESPN.

“Doing it with a club that doesn’t expect it, being part of the team that wins the title for the only time in their history, makes it more special. From the bus, it looked like there were more people on the streets than live in A Coruña.

“There was happiness, excitement … the trauma from ’94 made it even more meaningful. The club’s first title, so far its only one, brought so much joy to the whole city.”

Deportivo had expected their summer signing to be good, but even those inside the club were stunned with Makaay’s emergence as one of the finest finishers in the division.

Deportivo were unable to repeat their title success as consecutive runners-up finishes followed, while Makaay’s goals – whilst still respectable – slowed following the arrival of Diego Tristan from Mallorca.

The Spaniard had hit the ground running to score 55 goals in all competitions across two seasons, with the duo sharing the goalscoring burden for Javier Irureta’s side, who often preferred to operate with a single striker.

Makaay’s reduced status was such that he was an unused substitute as Depor beat Real Madrid to win the Copa del Rey in 2002, but he issued a devastating response the following season.

His fourth campaign with the club proved his most prolific as Makaay scored 39 goals in all competitions, finishing as the leading scorer in Spain and Europe.

🇳🇱 Roy Makaay back in the day 🎯#TBT | #UCL pic.twitter.com/pKSSTr52Mm

Makaay was now was one of Europe’s most coveted talents. A forward who could score any type of goal, his evasive movement and ruthless repertoire of finishes made him a man in demand.

Bayern Munich had witnessed first hand the capabilities of the Dutchman, after Makaay had hit a Champions League hat-trick in a 3-2 win for Deportivo at the Olympiastadion in September 2002.

In search of goals, Bayern spent a club record €18.75m to bring Makaay to Bavaria and it proved money well spent for the German giants.

Makaay scored 31 goals in all competitions during a prolific first season in Germany, taking to the Bundesliga with ease.

Silverware soon followed as his goals fired Bayern to Bundesliga and DFB-Pokal success the following season, with ‘Das Phantom’ added another 34 goals to his fast-growing collection.

Time and time again Makaay found himself through on goal, his evasive movement punishing flat-footed defenders as he raced away into space. Ruthless, regardless of the service, he was powerful in the air and unerringly accurate off either foot.

His final season saw Makaay set a Champions League record, after scoring within just 10.12 seconds against Real Madrid. Remarkably, it was the Spanish side who kicked off proceedings with Roberto Carlos’ mistake punished in quick-fire fashion.

The Dutchman finished as Bayern’s leading scorer in all four of his seasons in Munich, adding a second domestic double in 2005/06. Those four campaigns brought 102 goals in just 175 games and a position among the finest Bundesliga forwards of the modern era.

At 32, he returned to the Netherlands. Makaay signed for Feyenoord in a £3m deal in 2007 and despite his advancing age continued to improve his remarkable returns around goal.

He scored 50 goals in 101 games across three seasons in Rotterdam, demonstrating to the Dutch public the talent which had often been under-appreciated in his homeland.

Makaay won 43 caps for the Netherlands at international level, but facing competition from Dennis Bergkamp, Patrick Kluivert, Ruud van Nistelrooy and Jimmy Floyd Hasselbaink, he failed to cement prominent status with the Oranje.

While the goals flowed freely at club level, he scored just six times for the national side, often finding himself on the outside looking in.

Maakay scored the final goals of his career with a hat-trick against Heerenveen in May 2010, coincidentally the same opponent that he opened his goalscoring account against 17 years earlier.

Across that intervening period he scored 314 club goals, won three league titles across two different divisions, and added his name to goalscoring royalty with Pichichi and European Golden Boot accolades.

Boasting pace, power and a predacious instinct inside the area, Makaay was one of the finest forwards of the decade. An icon of a golden age for Deportivo La Coruna and one of the Bundesliga’s best.