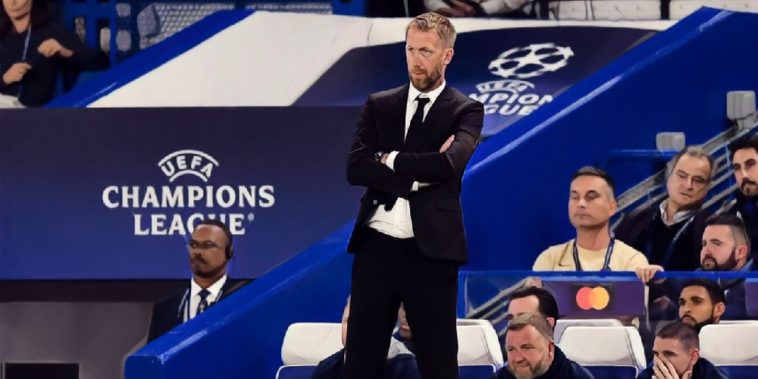 Graham Potter’s first game in charge of Chelsea ended in a 1-1 draw against RB Salzburg at Stamford Bridge.

Chelsea’s last outing ended in a surprise 1-0 loss to Dinamo Zagreb, a defeat that spelled the end of Thomas Tuchel’s time in charge at Stamford Bridge.

The Blues moved swiftly to secure the services of Graham Potter, with the former Brighton boss taking charge of Chelsea for the first time against Austrian champions, RB Salzburg.

The west London club enjoyed massive domination of the ball during the first half, though were unable to threaten Salzburg’s goal, with none of their nine first-half efforts on target.

Whatever Graham Potter said at the half-time interval certainly seemed to do the trick, as his side took the lead just three minutes after the restart as three England internationals combined. Reece James released Mason Mount down the right, before his cross dropped to Raheem Sterling. The 27-year-old – operating in an unfamiliar wing-back role – took a touch to set himself before producing a lovely curling strike past Philipp Kohn.

With just 15 minutes to go though, RB Salzburg would bag themselves an equaliser. Chelsea lost the ball deep in their opponent’s half before the visitors played some tidy one-touch football to get themselves up the pitch. Thiago Silva completely mistimed his challenge on Chukwubuike Adamu down the Salzburg right, before he slid the ball into Noah Okafor who turned the ball past Kepa Arrizabalaga.

Did what Voldemort couldn't and got a result against Potter 👍 pic.twitter.com/yx68l2mCtM

The result leaves Chelsea with just one point from their opening two games ahead of a Champions League double header against reigning Italian champions, AC Milan.

Speaking after the game, new Blues boss Potter said he was pleased with his side’s ‘personality and application’.

“We’re disappointed with the result. I thought the boys gave everything,” he told BT Sport. “We scored a good goal, but lost a bit in the second half but their goalkeeper has made some good saves.

“It is what it is, we have to dust ourselves down. Personality and application was good, we will get better. We got Raheem in one-on-one situations quite often and the goal was a good result of that.

“It’s always irritating when you concede a goal. Overall the defensive performance was quite good, it’s just the little details we will have to improve.

“It has not been easy for the boys, they have responded to us really well over the last few days and it’s a point we will have to take and get better. The attitude has been fantastic, no complaints apart from the fact we have not taken three points.”