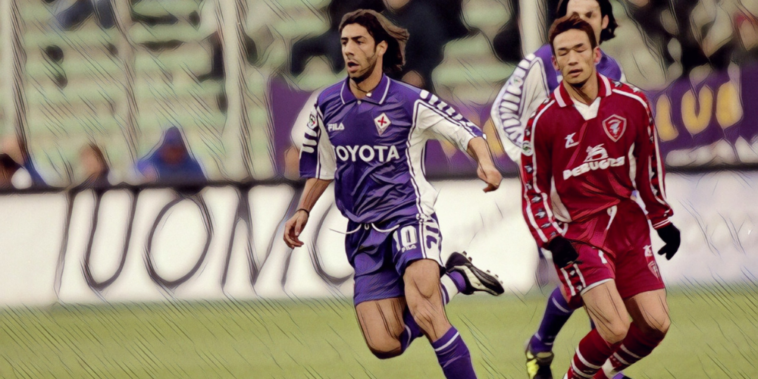 Nineties Serie A was a golden age for modern football, as the best faced the best and almost every side in the division possessed a star attraction.

It was an era in which the number ten thrived, a period in which mavericks were allowed to flourish and where attacking luxuries were often indulged.

Rui Costa was amongst the very best of a now all too rare breed.

Costa helped define a decade few will forget. The artistic Alfacinha, with slicked hair and rolled-down socks, who brought the fun-factor to an Italian top flight renowned for its defensive discipline.

Costa was born just northwest of Lisbon in Amadora, the most densely populated municipality in Portugal and an environment which contributed to the humility that remained with the midfielder despite his ascent to superstardom.

Inducted into the famous academy system of Benfica aged just five, he rose through the ranks at the capital club, earning notoriety as part of the Portugal side that won the u20 World Cup in 1991.

He made an immediate impression in the side with his ability to operate in crowded areas, possessing a first touch that manipulated the ball in tight spaces and provided the room to manoeuvre away from opponents and carve open defences.

Operating alongside fellow prodigy João Pinto in midfield, the duo helped Benfica to Taça de Portugal success in 1993 before the Primeira Liga title was secured the following season, one that would be Costa’s last in the colours of his beloved Benfica.

Encountering financial difficulties, the Portuguese side were forced to cash in on their coveted creator, with Costa ensuring his boyhood side were secure after turning down advances from Johan Cruyff and Barcelona to sign for a Fiorentina side offering a more lucrative proposal.

La Viola had earned promotion to Serie A the previous season and were looking for a footballer who could provide the ammunition for Gabriel Batistuta, the prolific Argentine amongst their ranks.

Costa and Batistuta would become one of Italy’s iconic duos, a blend of intoxicating invention and mercilessness within the widths of the posts.

The former pulled the strings as an archetypal advanced playmaker, drifting gracefully in a mesmeric manner beyond challenges, as the latter awaited the next chance to strike a decisive blow.

Fiorentina were far from the finished article under Claudio Ranieri, their defence weak and midfield not much better, but in Costa and Batistuta had two talents who could carry the club to a new level.

Batistuta finished as the league’s leading scorer during their first season in telepathic tandem, the forward aware that the right run would be found more often than not by Costa’s creativity.

Costa was everything a number ten should be.

He could beat opponents with an almost arrogant ease, a feint of the body or swivel of the hips enough to send challenges by the wayside as he skipped through oncoming traffic.

It’s Rui Costa’s birthday, so here’s 2m 38s of him doing wonderfully creative things with a ball at his feet.

His touch and technique – honed in the confines of a futsal pitch – were nonchalantly delightful, always delicate as the ball approached his possession, but often devastating when allowing it to leave.

Costa’s moniker of ‘The Prince of Florence’ was well deserved as he rivalled the likes of Roberto Baggio, Zinedine Zidane, and later Francesco Totti, for the title of Serie A’s pre-eminent playmaker.

Fiorentina came close to league title success in 1998/99 and added a second Copa Italia during the 2000/01 season, but with Batistuta departing for Roma and La Viola encountering financial difficulties of their own, Costa also moved on.

He followed Fiorentina manager Fatih Terim to AC Milan for a figure of €44m in 2001, tasked with bringing his unpredictable brilliance to one of Italian football’s northern giants.

Injuries marred his debut season as he struggled to replicate his past performances at the San Siro, but the 2002/03 campaign – despite the arrival of Rivaldo from Barcelona as competition – proved one of revival.

Milan – now under the guidance of Carlo Ancelotti – marched through the Champions League, finishing top during both group stages with Costa emerging as the competition’s creative force.

Il Maestro, as he became known with the Rossoneri, flourished behind the twin threat of Andriy Shevchenko and Filippo Inzaghi, including assisting all four goals as Deportivo La Coruna were thrashed 4-0 at the Riazor.

Freed to roam and dictate, he provided another wondrous assist as Real Madrid were beaten in the second group stage, picking up possession inside his own half before cutting apart the visitor’s defence with a pinpoint pass into Shevchenko’s feet.

Costa finished as the leading assist provider in the Champions League as Milan were crowned champions of Europe, beating Juventus on penalties at Old Trafford following a goalless stalemate.

He added the Scudetto to his list of honours the following season, but consistent fitness issues and the emergence of Kaka saw his role reduce for the Rossoneri.

Costa’s career at international level came to a close following Portugal’s run to the final of Euro 2004, as the nation’s ‘Golden Generation’ fell agonisingly short once more.

Costa had been part of a talented crop of Portuguese players who emerged simultaneously amid much hope, starring alongside the likes of Luis Figo and João Pinto as Os Navegadores reached the quarter-finals, semi-finals and final in three successive European Championships.

The midfielder was the catalyst behind Portugal’s comeback win against England at Euro 2000, providing all three assists as the Portuguese came from two goals down to stun Kevin Keegan’s side.

He netted one of the goals of the tournament as the two sides met again four years later, a brilliant bending finish beyond David James as host nation Portugal beat the Three Lions in the last eight of Euro 2004.

⏪🇵🇹 #ThrowbackThursday to when Rui Costa couldn't be stopped 🤩 pic.twitter.com/P7wcbJgLBS

Costa scored 26 goals in 96 appearances for the national side, but silverware proved elusive. His is a career that cannot be quantified with statistical numbers however, his lack of honours in comparison to his contemporaries of the era a testament to his loyalty rather than his talent.

For a period in Serie A there was trivial and real debate over which of Costa and Zidane was the superior player, an indicator of the esteem in which the fleet-footed Fiorentina superstar was held.

The magnificent moments of Costa’s creativity and the swagger in which operated have ensured his legacy is one of fondness in Florence and magical memories in Milan.

He called time on his career after a short second spell at Benfica, returning home to make good on the promise he made upon his departure more than a decade earlier.

Costa is a footballer often overlooked, but whose name is greeted with grins from those who watched him in action – a selfless showman who shone amongst the stars in Serie A.