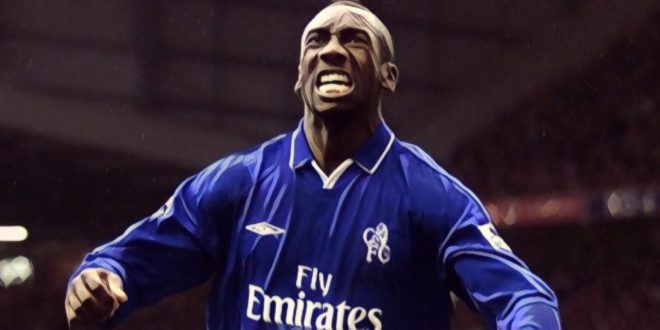 Modern football is full of players difficult to define to one specific position or role, an era in which defensive strikers and overlapping centre-backs are real positions, concepts which would have been laughed at in the not too distant past.

In an ever changing world of tactics and ideas, it is perhaps nice to reflect back on a player whose game demonstrated little complexity – a man whose sole focus was on scoring goals and often amid the most minimal of fuss.

Jimmy Floyd Hasselbaink sits alongside just Alan Shearer and Robin van Persie as the only players to have won the Premier League’s Golden Boot whilst playing for two different clubs, a devastatingly effective forward whose thunderous power made even the most fearless among the division’s defenders shudder.

Born in Suriname before moving to the Netherlands with his mother and siblings, the early years of Jerrel ‘Jimmy’ Floyd Hasselbaink were spent in Zaandam, just north of Amsterdam, where his footballing ability saved the youngster from a life of drugs and crime.

The young Hasselbaink had been no stranger to trouble during his formative years and admitted to becoming involved in gangs during his teenage years, revealing he carried a knife during his time on the streets of a city filled with potential pitfalls.

After overcoming a difficult period his footballing journey began professionally at SC Telstar, where he made his first senior appearances for the Dutch second-tier outfit.

Hasselbaink had begun his journey as a goalkeeper before his talents were best utilised much further forward, but a series of disciplinary issues at Telstar led to him joining AZ Alkmaar, where his brother Carlos played.

Despite being a regular during his sole season in Alkmaar, Hasselbaink was not retained at the end of the campaign and subsequently moved to Portugal with newly-promoted Campomaiorense, where his impressive debut season prompted another move – joining Boavista in a £300,000 deal.

The forward scored 24 goals in all competitions during a brilliant debut campaign with his new side, his meteoric rise culminating in yet another transfer the following summer, the bright lights of the Premier League calling as Leeds United gambled on his services in a £2m deal.

Hasselbaink was swiftly tasked with being the West Yorkshire side’s chief goalscoring threat and made an immediate impact with a goal on his debut against Arsenal, but the striker struggled to settle during his opening months at Elland Road and managed just five league goals by Christmas.

Hasselbaink’s fortunes changed swiftly following the turn of the New Year, however, and he finished his debut season having scored 22 goals in all competitions, demonstrating the ruthless finishing and thudding power which would define his career in English football.

The following season saw the Dutchman continue to fire at a prolific rate, continuing his rich vein of form despite the departure of George Graham as manager and the appointment of David O’Leary.

Premier League defences were regularly bludgeoned by the pace and power of the star, whose repertoire of finishes included fabulous free-kicks, perfect placement and the Hasselbaink trademark – the thunderbastard.

He finished the season with 18 league goals to win the division’s Golden Boot alongside Manchester United’s Dwight Yorke and Liverpool teenager Michael Owen, his season highlights including a vital winner against Arsenal to help secure a fourth-placed finish and this effort against Nottingham Forest.

It’s a goal which encapsulates the best of what Hasselbaink offered, defenders bouncing off his sturdy frame before he begins to step through the gears into enemy territory. A subtlety to his game – not always shown  – is evident as he feigns past a feeble challenge, before unleashing a signature strike of vicious venom into the top corner.

Leeds’ fans had a new hero in the form of the formidable Hasselbaink, but his spell in the North East of England would end on a sour note following a breakdown in contract talks. O’Leary declared that no club in the country could afford the forward’s wage demands, despite an offer on the table that would make their leading goal-getter the best-paid player in their history.

The dispute ultimately led to the shock departure of the player who signed for Atletico Madrid in a £10m deal, where despite another prolific season – scoring 33 goals in all competitions – Hasselbaink was unable to prevent the capital club suffering a shock relegation.

Atletico’s drop into the second tier of Spanish football activated a release clause in Hasselbaink’s contract, a figure which was triggered by Chelsea who brought the player back to English football in a £15m club-record deal – an outlay which also matched the Premier League record Newcastle paid for Alan Shearer.

Hasselbaink marked his first appearance with a goal against Manchester United in the Charity Shield, before plundering an impressive 26 goals in all competitions to become an instant fans’ favourite at Stamford Bridge.

The sacking of Gianluca Vialli and arrival of Claudio Ranieri – his former manager at Atletico Madrid – did little to stop the striker’s fine form, his 23 league goals seeing Hasselbaink win the Premier League’s Golden Boot for the second time in his career.

There seemed no opponent safe from his firepower during a season in which he netted goals against Liverpool, Arsenal and a four-goal haul against Coventry City, but it was this September effort at Old Trafford which ranks as Hasselbaink’s finest of the campaign.

Sir Alex Ferguson’s United side had won back-to-back league titles and a historic treble over the past two seasons, but an emerging Chelsea outfit were prepared to go toe-to-toe with the Red Devils and Hasselbaink was at the centre of it in a pulsating 3-3 draw.

The forward opened the scoring after just eight minutes with a goal of frankly ridiculous precision and power, cushioning Tore Andre Flo’s looped cross on his barrelled-chest before unleashing a breathtaking blast on the half-volley to stun the champions.

Wouldn't mind seeing another goal like this against Man Utd over the weekend!

The following season saw Hasselbaink improve his goal tally once more, the Dutchman thriving in partnership with Eidur Gudjohnsen as the latter began to grow in influence at Stamford Bridge.

Gudjohnsen’s deft and delicate style perfectly complimented the powerhouse play of Hasselbaink, the duo dovetailing perfectly to form one of the Premier League’s great forward partnerships.

Hasselbaink had proven the scourge of many a Premier League defence but perhaps no side feared his presence more than London rivals Tottenham, the star often saving his best displays for the Blues’ clashes against north London opposition.

After scoring home and away against Spurs during his debut season, Hasselbaink continued his fine form against the club by scoring five times in just two fixtures in 2001/02, including a perfect hat-trick during a 4-0 thrashing of Glenn Hoddle’s side.

The Chelsea number nine’s first and third goals of the evening rank amongst his finest scored at Stamford Bridge, two spectacular curling efforts – one with each foot – from distance to seal a memorable victory in west London.

The ability to score any type of goal is is so rare.

Hasselbaink was born to score goals.pic.twitter.com/sxirT9nbyP

Hasselbaink’s output dropped over the next two campaigns but he still managed double figures in each, including finishing as the club’s leading scorer during 2003/04.

The summer of 2003 would forever change the future of Chelsea following Roman Abramovich’s billionaire takeover of the west London outfit, but their Dutch talisman remained a key figure despite the significant investment and arrivals of forwards in Adrian Mutu and Hernan Crespo.

It proved to be his final season at the club as the arrival of Jose Mourinho spelt the end of his time at Stamford Bridge in 2004, but his last campaign in Chelsea colours delivered an 18-goal haul in all competitions and this delightful effort against Wolves.

Hasselbaink proved there was plenty left in the tank after coming on as a substitute to hit a hat-trick against the Black Country side, marking his 32nd birthday in perfect style to claim the match ball at Stamford Bridge.

Amongst his treble included this opening effort in the below montage, the forward swatting aside defensive challenges before unleashing a trademark thunderbolt past the despairing goalkeeper.

The decision to allow Hasselbaink to walk away with a year remaining on his contract came as a surprise to many, with Middlesbrough sealing the signing of the experienced star as the Teessiders bolstered their forward line with acquisitions of the two-time Golden Boot winner and Australian international Mark Viduka from Leeds.

Viduka proved the perfect foil and the two formed a strong partnership during their time in the North East, their understanding crucial to a fine period for Steve McClaren’s side in which they reached the UEFA Cup final.

Hasselbaink scored 33 goals in 89 appearances over his two seasons at the Riverside, his finest this phenomenally powerful set-piece stunner against Manchester City in 2005. The Netherlands international had scored a free-kick against the same opposition the previous year, before producing another magical moment in a crunch clash in Manchester.

No run-up, no problem – the thunder-thighed Hasselbaink unleashing a scorching effort which helped seal Middlesbrough’s place in Europe, McClaren’s side qualifying for the UEFA Cup at the expense of their opposition who memorably – and frankly bizarrely – deployed goalkeeper David James as a striker in desperate search of a winner.

As his powers began to wane the Dutchman spent single season spells at both Charlton and Cardiff, though he proved to be a shadow of the player whose ferocious firepower had led to Premier League defenders waking up in cold sweats around the turn of the millennium.

Hasselbaink finished his career having scored 127 goals in 288 top-flight appearances, a figure greater than the likes of Ruud van Nistelrooy and Dennis Bergkamp and behind only Van Persie amongst his countrymen.

Modern football is often hung up on multi-functional players capable of fulfilling different roles, but sometimes success comes in the form of simplicity.

Jimmy Floyd Hasselbaink and his penchant for hitting a football very, very hard – will testify to that.