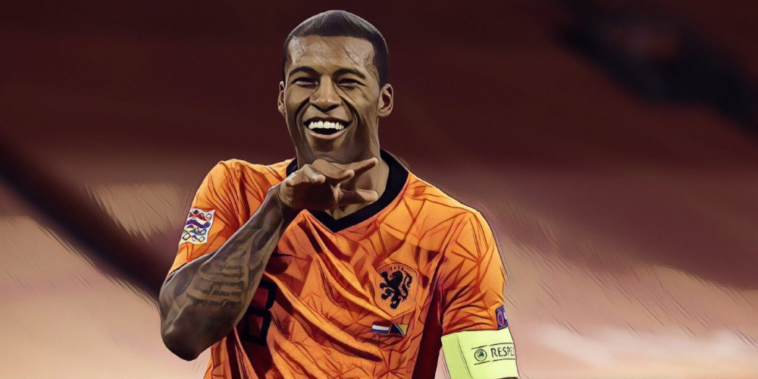 Gary Neville believes Georginio Wijnaldum will be ‘badly missed’ by Liverpool next season following the midfielder’s move to Paris Saint-Germain.

Wijnaldum has signed for PSG on a free transfer after deciding to leave Liverpool at the end of his contract, the midfielder signing a three-year deal with the Parisians following a successful spell on Merseyside.

The Dutch international was one of Jurgen Klopp’s first signings at Anfield and an integral part of the Reds’ recent successes, winning the Champions League and Premier League during his time at the club.

The 30-year-old scored during the Netherlands 3-2 win over Ukraine in their Euro 2020 opener, opening the scoring after capitalising on a mistake from the goalkeeper to fire home a finish into the roof of the net.

Neville discussed Wijnaldum’s role for club and country following his performance and believes the ‘unsung hero’ will be badly missed at Liverpool next season.

“Unsung hero. People talk about all the great players Liverpool have and he very rarely gets a mention,” Neville told ITV Sport.

“I think he’ll be badly missed next season, very difficult to replace him at Liverpool.

“He’s one of those players that keeps things ticking. You don’t look at him and think he’s doing anything outstandingly well, but I would imagine his teammates respect him enormously because he covers a lot of areas on the pitch.

“He does things simply for his teammates, he’s an unselfish player and he’s an important player for this Dutch team.”